“Anything Goes” Opens At The Ahmanson Theatre 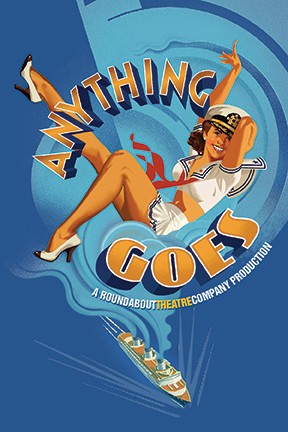 The new Broadway revival of “Anything Goes,” Cole Porter’s timeless classic musical theatre masterpiece, opens at the Center Theatre Group/Ahmanson Theatre on November 28, 2012 at 8 p.m., and continues through January 6, 2013.

Winner of the 2011 Tony Award® for Best Revival of a Musical, Roundabout Theatre Company’s “Anything Goes” sails direct from Broadway under the direction of Kathleen Marshall, who won the 2011 Tony Award® for Best Choreography for “Anything Goes.”  The New York Times calls it “a zesty new revival with knockout numbers and white-hot dancing” while the AP exclaims that it’s “so delightful, so delicious, so de-lovely!”

“Anything Goes,” the 1934 musical comedy about the lovers, liars and clowns on a transatlantic cruise is “a daffy, shipshape romp!” (Variety). When the S.S. American heads out to sea, etiquette and convention head out the portholes as two unlikely pairs set off on the course to true love… proving that sometimes destiny needs a little help from a crew of singing sailors, an exotic disguise and some good old-fashioned blackmail.

Tickets for “Anything Goes” are available by calling (213) 972-4400, online at www.CenterTheatreGroup.org, or in person at the Center Theatre Group box office at the Ahmanson Theatre. Tickets range from $20 – $120 (ticket prices are subject to change). The Ahmanson Theatre is located at the Music Center, 135 N. Grand Avenue in Downtown L.A. 90012.