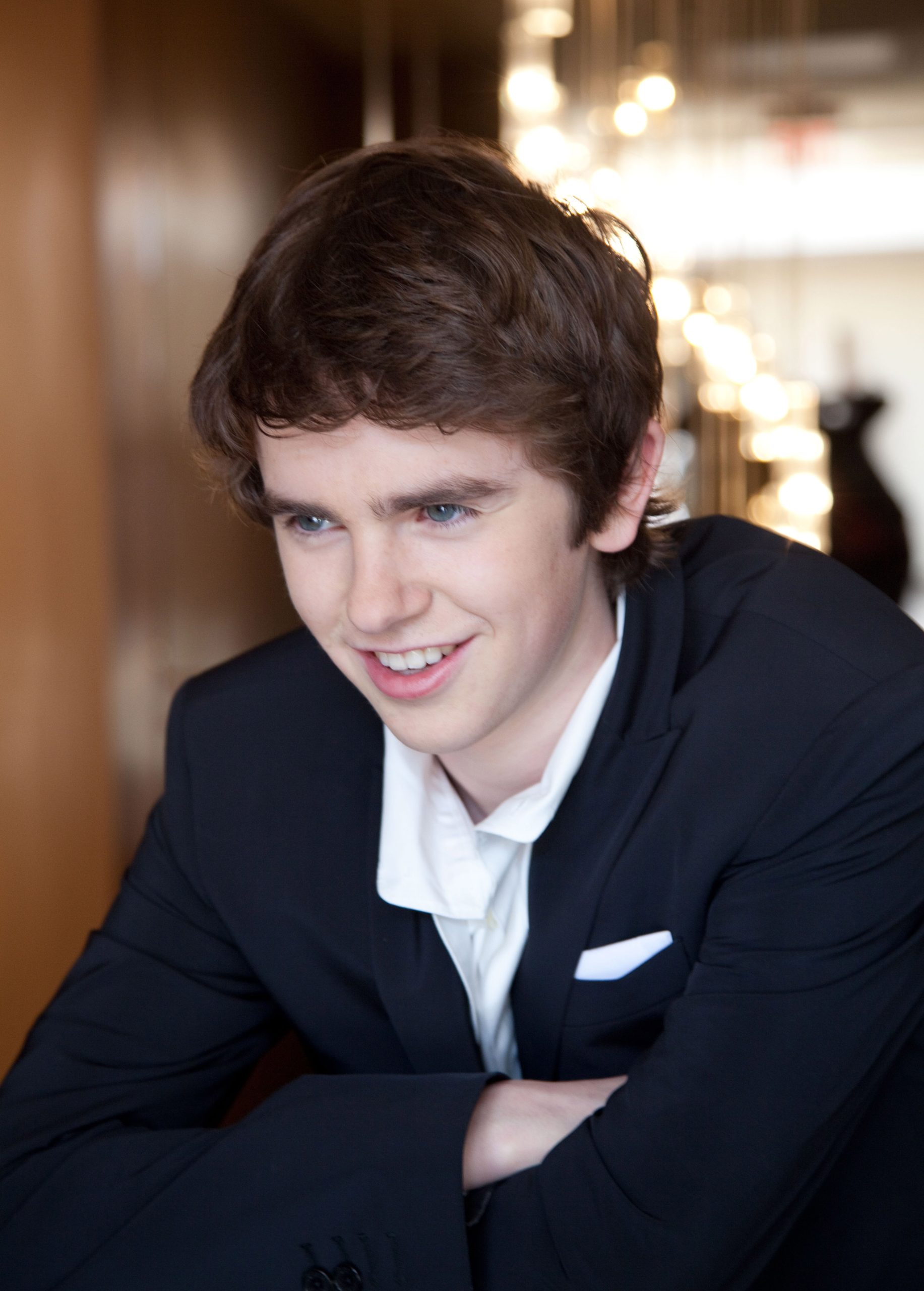 Is Freddie your given name?

My real name is Alfred but everyone has called me Freddie forever at home.

Your Mom is Daniel Radcliffe's agent. Is she your agent too?

Yes she is. Daniel has done very well with the Harry Potter movies. I guess they are sort of the films that defined my generation.

Well you've managed to be in quite a few movies that may have defined a generation as well. Of course there's CHARLIE AND THE CHOCOLATE FACTORY. That looked like it was a lot of fun to make.

It was. They built these massive sets at Pinewood Studios in London. That was one of the nice things about doing it. I got to stay home. It was a 6 month shoot so it was nice to get to go home every day. Whereas for The Art of Getting By it was in New York, which is a fantastic place, but there is always this down side of being split up from your family. That shoot was about 5 weeks so it was a completely different level of time but there is something quite exciting about doing a movie in a small amount of time.

How did you like working with Tim Burton on CHARLIE?

Tim Burton was fantastic. He always has so many great ideas and just full of energy and enthusiasm for it.

That was the 2nd time you starred in a movie with Johnny Depp. You were also in FINDING NEVERLAND. Is it true he recommended you for the role in CHARLIE?

I'm not sure. That's what people seem to say. I had a fantastic time on Finding Neverland. It was great to get to work with him. I went through the audition just like everyone else and got the part in the end. If he had something to do with it then that's fantastic.

You have gotten to play a lot of different parts and managed not to get pigeonholed into one character. You've also done quite a bit of voice over work. I'm not sure many people realize you were the voice of Astro Boy. How do you think voice over compares to live acting?

It's not as different as I think people make out. There's always an important side to it to stay as focused and professional when you are doing a voice over as when you’re on set. It's not just a case of reading the lines on the day and seeing how it goes. There's the same amount of preparation and the same amount of time you need to devote to making the character. The key is just to be as real as possible. You don't have to dress up or charge around in an Astro Boy costume but I think at the same time the amount of time you put into the character is the same. I've never really seen it any differently from another part.

In Astro Boy you use an American accent. Is that something that comes easy to you?

I think the first film I did an American accent in was August Rush so after that it was just sort of coming back to an accent you already learned as opposed to learning it fresh for each part. For The Art of Getting By it came more naturally. I think that's the key really. Making it come naturally and not really thinking about it while you're delivering lines or on set. Do the preparation and then not think about it when you are on set.

You mentioned August Rush. That was another excellent movie that you won a number of awards for. You really got a chance to show your acting abilities in that film.

Your new film The Art of Getting By is coming out this month and Emma Roberts is your co-star in it. You play kind of a troubled High School kid in New York.

It was a fantastic film to do. I was lucky to be involved really. It was certainly different from other stuff I had done before. It was really an interesting character to play. A lot of people think he's a disillusioned fatalist kind of guy at the start and almost perhaps a bit over the top about it. For me, that's not who he really is. By the end of the film we find out the person he wants to be and the person he actually is as opposed to playing up to his role as part of a social group. We all know that person in the class who's trying to be the funny one or the one who doesn't do his homework, or messes around or does a lot of work. It's quite easy to fall into that social group and play that role always instead of thinking who I actually want to be.

The movie starts off with an opening monologue that makes it seem like we're in for a lot of doom and gloom and then it doesn't end up being that at all. The romance in the film starts off one-sided and goes from there. Did you have personal experiences to draw from in playing the part?

I think you always put a certain amount of yourself in every character and you have to draw from your personal experiences to make it real. I think that's what makes The Art of Getting By so appealing. It has all those sorts of issues that lots of people have gone through, lots of people have felt. Being in love and feeling rejected at times. Feeling unloved. Wanting to succeed and feeling the pressure at home and school to succeed that everyone has to go through by the end of High School.

The kids in the film are upwardly mobile Upper East Side New York rich kids who are presented with different opportunities that many kids get. Do you think the issues brought up in the film are universal?

Yeah, I think the issues are certainly universal and everyone deals with them in different ways. Even if other people can't identify  with the way George deals with it as this sort of depressive type figure everyone knows that that first love is sort of special whoever and wherever you are.

You got to work with Emma Roberts in many of the scenes.

Yeah she had to put up with me a lot. We got along very well and it made it very easy for the intimate moments. The fact that we didn't feel awkward around each other.

There's a scene between the two of you in a restaurant where she tells you she wants to have sex with you and you're not sure if she really means it. They say the greatest acting is not saying the words but in the reaction to the words you are hearing. Your face in that scene is amazing. As a viewer you can see the many different emotions your character is going through and you never speak.

I think that's reality really. The fact that you don't always have to say something to express an emotion. Also you often say the complete opposite of what you are actually thinking. You don't have to tell everyone you're upset and start crying. You can put on a smile and be the opposite and that's almost worse.

Speaking of crying, your character tears up quite a few times in the film. Was that difficult for you?

No I never really felt the pressure to cry. People always say "how'd you cry?" I don't think the important thing is crying. I think it's feeling the emotion the character is feeling and whatever happens happens. I never feel the pressure to produce a tear at a particular moment but if you're character is in this situation and he is incredibly sad and you cry… it happens.

What's next for you?

Well I just started University in Cambridge back in England so that's all going well. I'm carrying on with that. I have exams coming up. It's been great doing films and school and combining the both. There's a couple of projects that may happen later this summer.

What are you studying?

How did you ever pick those subjects?

I always enjoyed doing languages and I figured Arabic would be a language that I wouldn't get a chance to study at another point in my life. I did French and Spanish so I figured if I wanted to do another romance language like Italian it would be more accessible to me on my own but Arabic I needed to do in school. People always think the Arabic characters and the alphabet are the hardest thing but you get that done in like the first week. I think the trickiest things about Arabic is the difference between the way people write down the language and the way they speak it. There are so many different dialects in the Arab world so someone from North Africa won't be able to speak in their dialect with someone from the Gulf.

I'm a big soccer fan. I play the FIFA series, we have season tickets to the Arsenal in London and I play a lot as well. That's my main hobby. I play on a team at Cambridge and with friends when I'm on holiday.

Anything our readers would love to know about you?

No I really don't have any big secrets. Nothing big to reveal, nothing I need to hide. I'm not dating anyone at the moment but I would. It's not something you can really control. No pets. Used to have fish. Splish and Splosh but they passed away a long time ago. You can't really get much bonding with a Goldfish so it wasn't too sad.