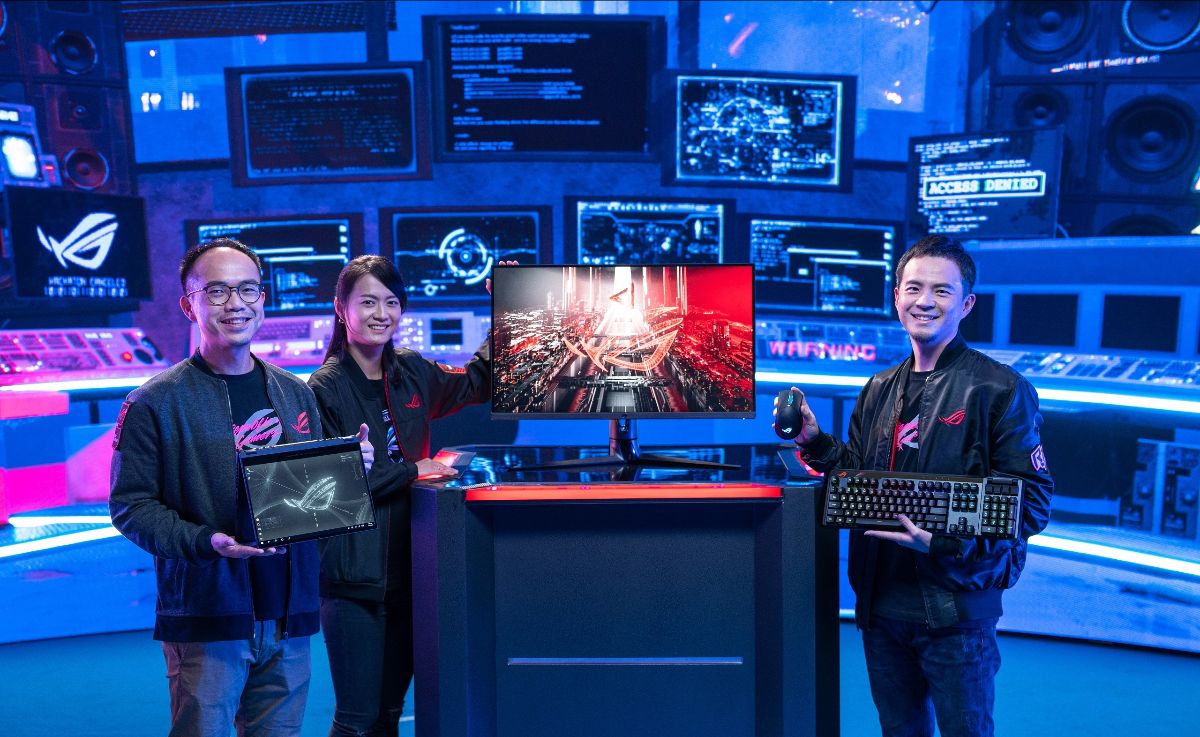 ASUS Republic of Gamers (ROG) today announced its first interactive experience and an exciting lineup of gaming innovations and technologies at the CES 2021 ROG For Those Who Dare virtual launch event. The event marked the debut of the ROG Flow X13 gaming laptop with the XG Mobile external GPU, the dual-screen ROG Zephyrus Duo 15 SE gaming laptop, Strix SCAR 17 gaming laptop, the 32-inch ROG Swift PG32UQ 4K 144 Hz gaming monitor with HDMI 2.1 for console and PC gaming, as well as the ROG Claymore II gaming keyboard and the ROG Gladius III Wireless gaming mouse. These latest products and more are available to explore in ROG Citadel XV, a boundary-breaking interactive experience introduced during the ROG For Those Who Dare virtual event livestream and available to download for free on Steam.

ROG Citadel XV extends ROG's reach from hardware and software to gaming content to enrich the gaming ecosystem and overall gaming experience. The ROG Citadel XV takes gamers through the ROG Citadel underground fortress, where they'll experience the latest cutting-edge ROG products and technologies being developed. They will be taken to several futuristic Cyberpunk-inspired laboratories to view the new ROG offerings. The lab designs reflect the ROG design language based around the themes of Vanguard, Fusion and Rebel. Once through the fortress, an arcade-inspired first-person shooter mini-game is then unlocked, where participants can test their aim and reflexes by taking down 3D targets moving across the screen.

Check out everything revealed at the CES 2021 ROG For Those Who Dare virtual launch event here: https://rog.asus.com/event/for-those-who-dare 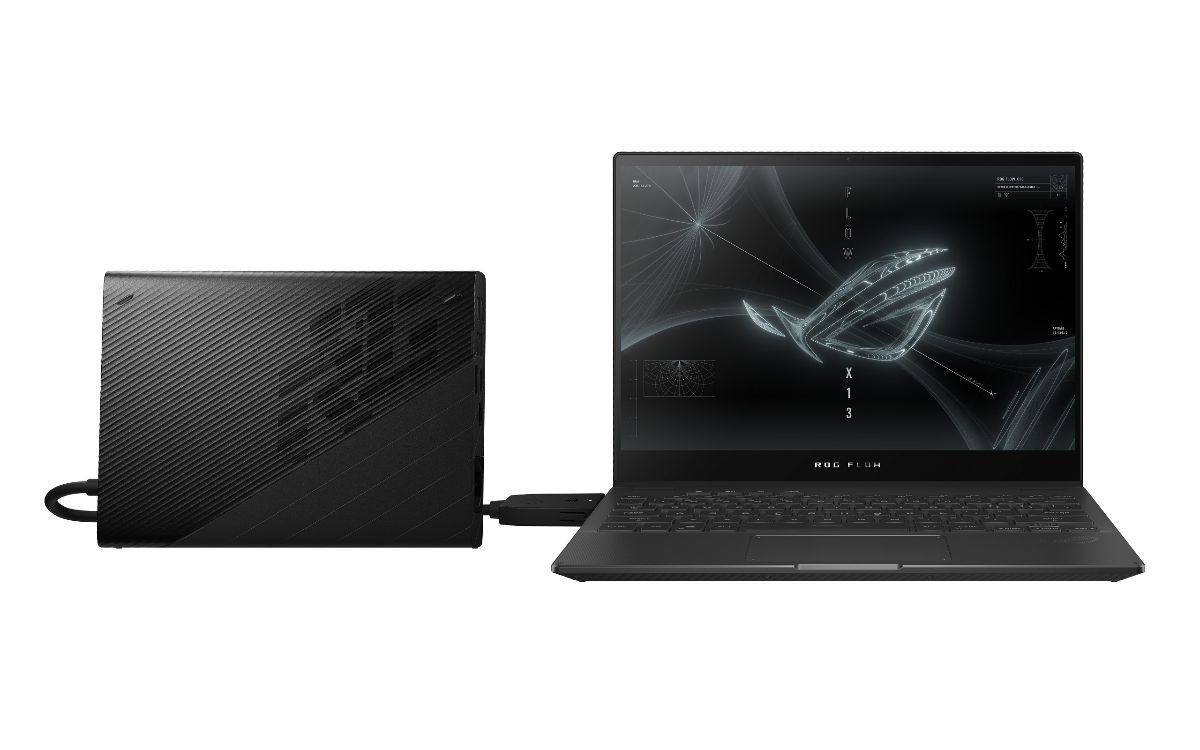 ROG Flow X13
ROG Flow X13 is a 13-inch ultraportable gaming laptop powered by up to an AMD Ryzen™ 9 5980HS mobile processor CPU and NVIDIA GeForce GTX 1650 graphics. The energy efficient CPU helps prolong battery life, giving Flow X13 up to 10 hours of gaming on a full charge. It also comes with a lightweight, 100-watt USB-C® PD charger that can charge an empty battery to 60% in just 39 minutes.

Flow X13 features a flip design that allows the screen to be flipped 360° for use in various scenarios. The laptop is available with a 120 Hz FHD panel or a high-res 4K panel that's protected by tough Corning® Gorilla® glass and features a narrow-frame design and support for touch and stylus input. Both choices of display have a 16:10 aspect ratio, support Adaptive-Sync and are Pantone® Validated for superb color accuracy.

Flow X13 can be paired with XG Mobile, an external GPU with up to NVIDIA® GeForce RTX™ 3080 graphics. When connected, XG Mobile gives Flow X13 a graphical prowess that's equivalent to full-sized gaming rigs. A proprietary eGPU connector dedicates 63 Gbps of bandwidth exclusively to graphics, resulting in significantly higher performance than Thunderbolt™ eGPUs. The graphical performance boost from XG Mobile gives Flow X13 the versatility to handle content creation, AAA gaming and work on the go, as well as hardcore gaming at home.

XG Mobile also includes a dedicated USB 3.2 Gen 2 link, which feeds an I/O hub with extra connectivity, and an integrated 280W AC adapter, which powers both XG Mobile and Flow X13 so that users don't need to carry an additional power brick.

The cooling system of Flow X13 is fine-tuned for high performance in a small chassis. ROG is the first to apply AMD CPUs with liquid metal in mass-produced laptops. Flow X13 has three heatsinks and fan outlets, and new Arc Flow fans that improve airflow by up to 15% without increasing noise. A self-cleaning thermal module also ensures reliable performance over time. ROG offers multiple operating modes so users can tune the cooling system for different requirements. 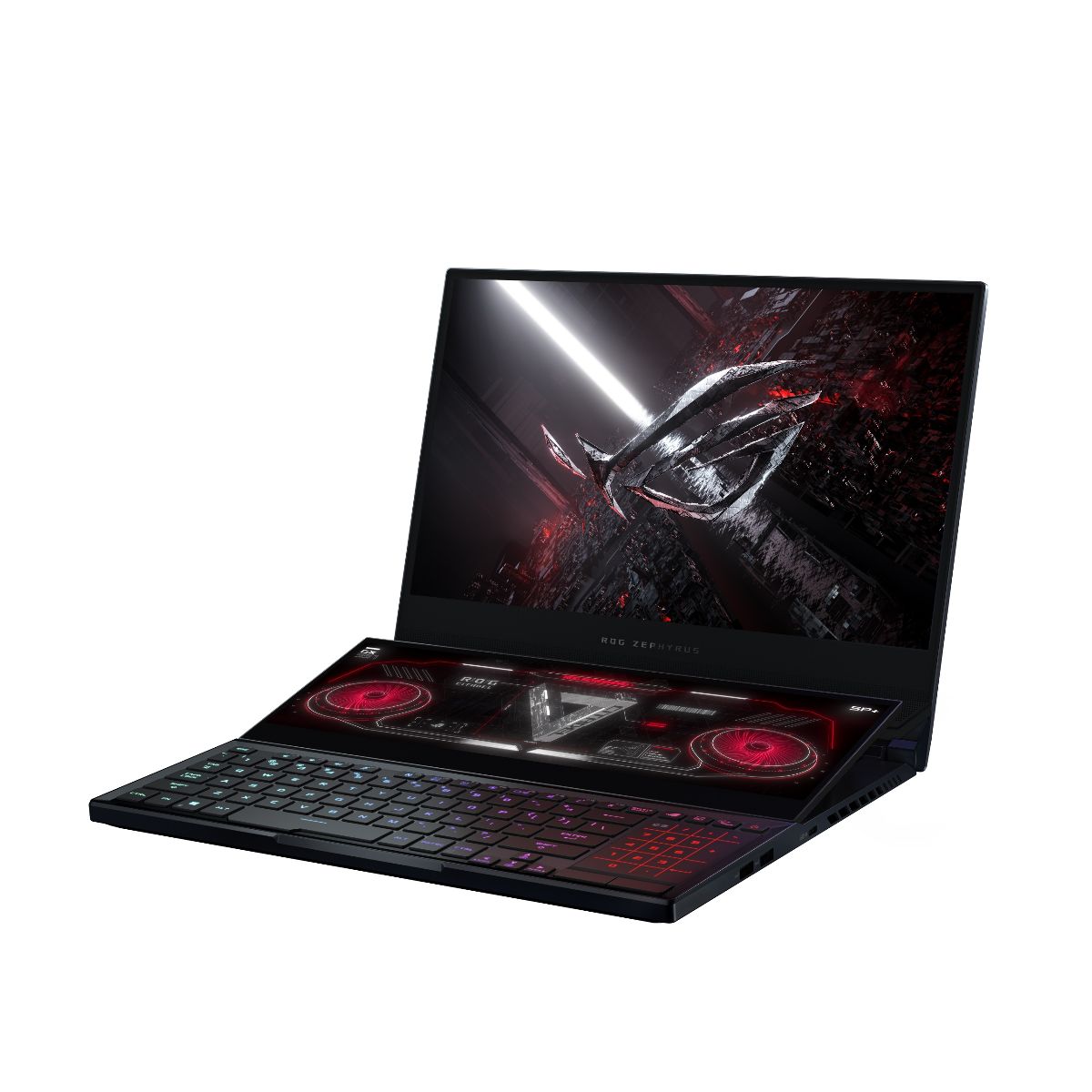 The ultraslim Zephyrus Duo 15 SE is powered by up to an AMD Ryzen 9 5900HX mobile processor CPU and up to NVIDIA GeForce RTX 3080 graphics. It comes with either a 120 Hz 4K display with 100% Adobe RGB color space coverage or a 300 Hz FHD display with a 3 ms response time and 100% sRGB color space coverage. Both panels are PANTONE Validated and feature thin-bezel designs and Adaptive-Sync technology.

Gamers can use the ScreenPad Plus secondary panel to browse the web, read emails, chat over instant messaging apps, or to stream or record gameplay. ROG worked with developers for additional interactive content on the secondary display, as well as partnered with XSplit Gamecaster to allow gamers to monitor their streams while gaming on the main display. In addition, ROG worked with Adobe for additional content creation tools for some of its creative software.

The upgraded Active Aerodynamic System Plus (AAS+) cooling system allows more power to be fed to the CPU and GPU without increasing noise levels. The design provides an air intake underneath the secondary display to aid cooling. It features new Arc Flow fans that increase airflow by 13% over the previous generation, transfers heat from the AMD CPU with a liquid‑metal thermal compound, and uses five heat pipes and four heatsinks with increased surface area. 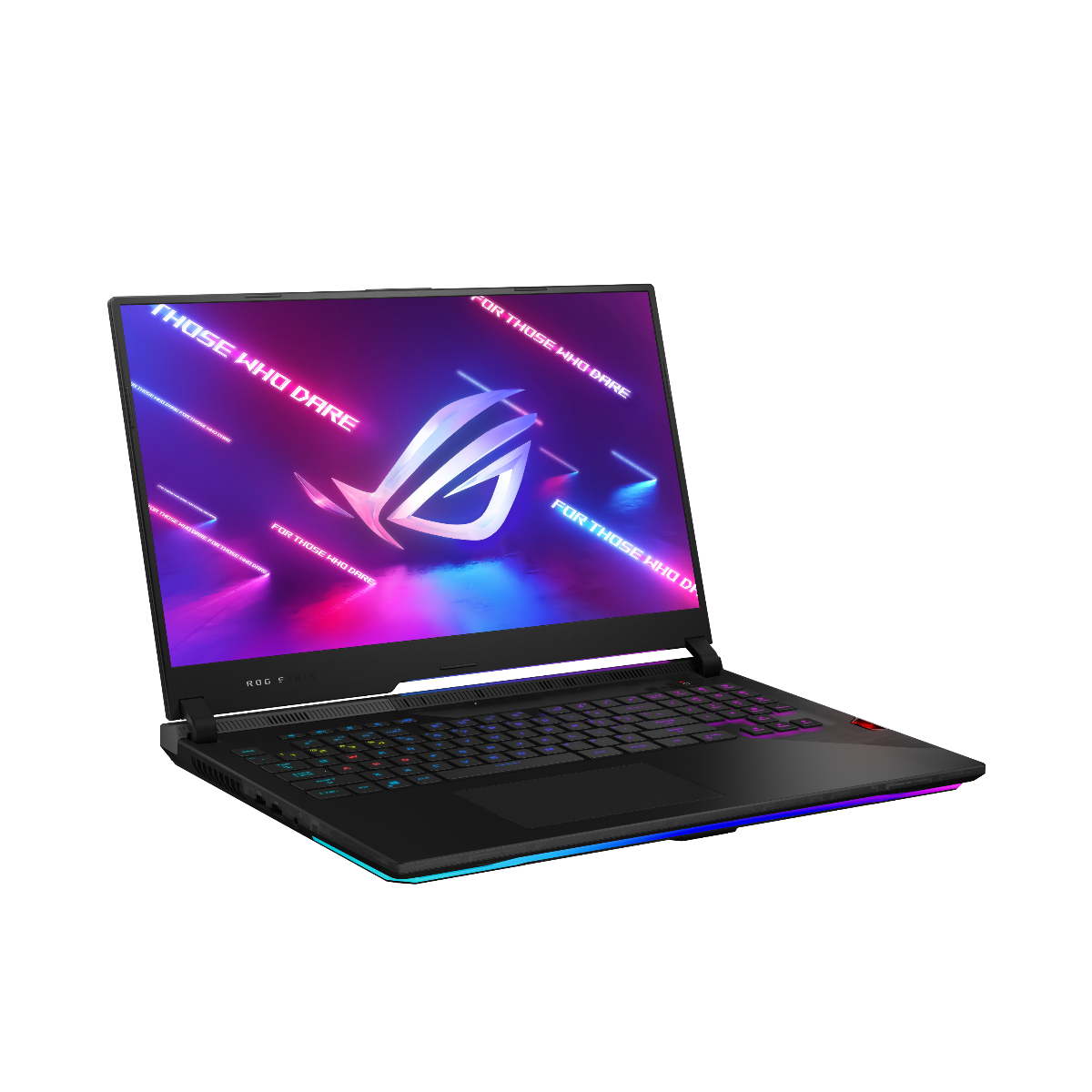 ROG Strix SCAR 17
ROG Strix SCAR 17 is a gaming powerhouse that can be specified with up to GeForce RTX 3080 graphics and up to an AMD Ryzen 9 5900HX mobile processor CPU. It has up to 32 GB of dual-channel DDR-3200 MHz memory and features new fans and liquid-metal cooling.

SCAR 17 has a quad-speaker design and Dolby Atmos sound enhancement to give gamers a competitive edge, allowing them to accurately pinpoint the source of in-game noises like footsteps or gunfire. The built-in Two-Way AI Noise-Cancelation feature filters out ambient noises for crystal-clear in-game communication, even when gaming in noisy environments.

The larger 90 Wh battery now provides up to 12 hours of video playback on a single charge, with support for fast charging and compatibility with 100‑watt USB Type-C power adapters.

The optical mechanical keyboard of SCAR 17 features per-key RGB lighting, 1.9 mm key travel and zero debounce delay for near-instantaneous inputs. The trackpad is also 85% larger than the one found on the previous model, making it easier to use while on the go.

SCAR 17 is more compact than its predecessor, and this new design also includes a higher-density RGB light bar around the front edge of the chassis, an additional light strip under the display, a set of three user-swappable hinge caps and a bold new aesthetic inspired by athletic gear.

A refined cooling system extracts peak performance from SCAR 17 while lowering noise levels by 3 dB compared to the last generation. Refinements include the use of a liquid-metal thermal compound on the AMD CPU, new Arc Flow fans with special blade tips that reduce turbulence with an aerodynamic wave pattern and a more efficient self-cleaning cooling system. 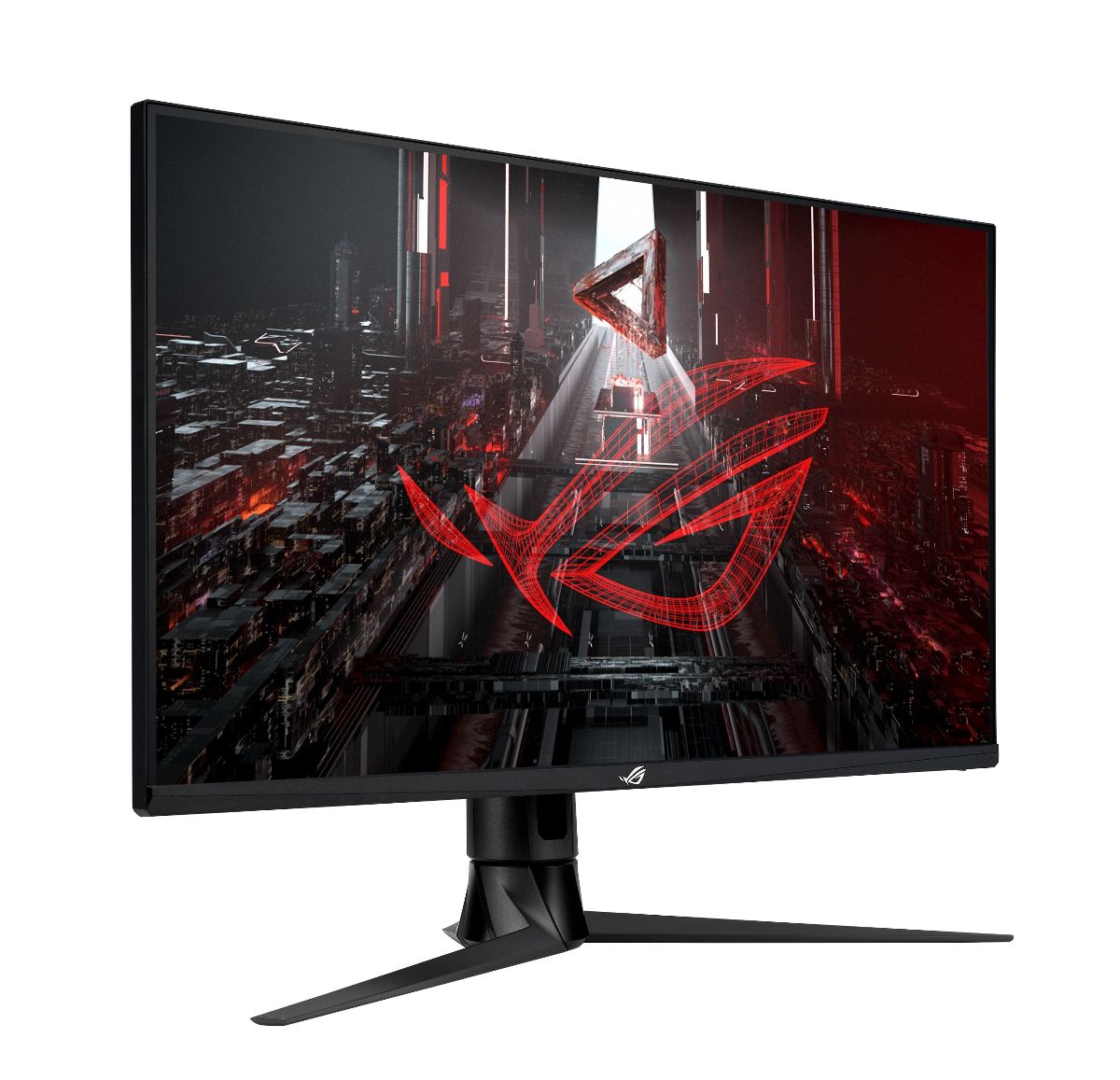 ROG Swift PG32UQ
ROG Swift PG32UQ is the world's first 32 -inch HDMI 2.1 gaming monitor and features a 144 Hz IPS panel with a 1ms moving picture response time (MPRT). It has two HDMI 2.1 ports to support up to 4K visuals at up to 120 Hz on the latest gaming consoles. It also has Display Stream Compression (DSC) technology, a compression standard for transporting ultra-high definition video streams across a single interface at high speed with no perceptible loss of visual quality. It allows PG32UQ to support up to 4K 144 Hz visuals via a single DisplayPort 1.4 connection.

Electronics
The Video Game Industry's Estimated Worth Is $159.3 Billion