The Academy Museum Will Open In 2019 Celebrating Film History

The Academy Museum will open in 2019 with a long-term exhibition that explores the evolution of film from its beginnings to its possible futures. Tom Hanks celebrated the announcement of the restored six-floor cultural institution next to the Los Angeles County Museum of Art. 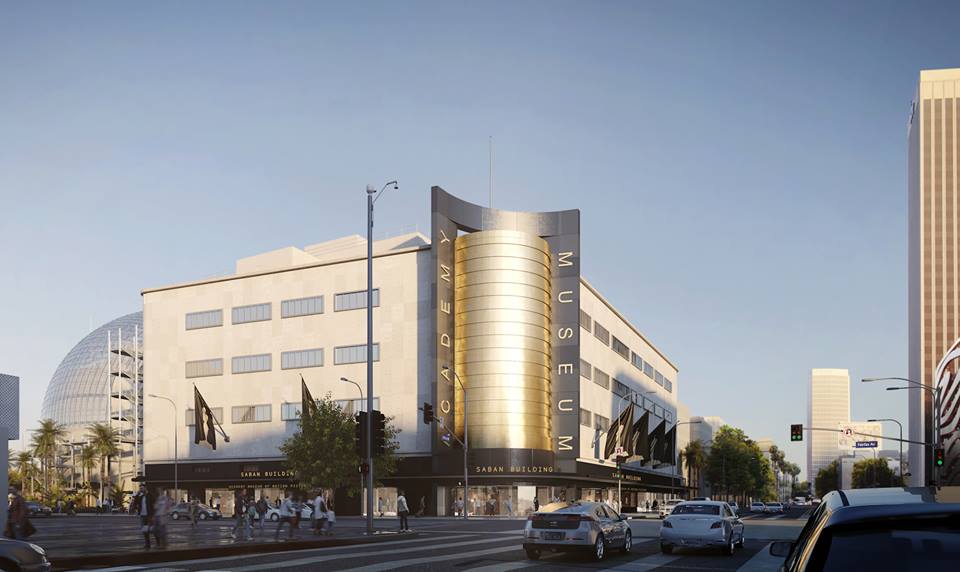 Where Dreams Are Made: A Journey Inside the Movies (working title) will occupy two floors of the Museum’s iconic Saban Building—formerly known as the May Company building—and looks at the development of the art and science of motion pictures. Brougher also announced the institution’s first temporary exhibitions.

The Museum will open with Hayao Miyazaki (working title), presented in collaboration with the filmmaker’s Studio Ghibli—the first major exhibition of his work presented in the United States. This exhibition will be followed by Regeneration: Black Cinema 1900–1970 (Fall 2020), a groundbreaking exhibition that reveals the important and under-recognized history of African-American filmmakers in the development of American cinema. It will explore African-American representation in the motion picture from its advent to just beyond the Civil Rights era. The Museum’s 34-foot-high project space will open with a major work by the Tokyo-based interdisciplinary art collective teamLab. Additional exhibitions will include Making of: The Wizard of Oz, featuring elements that contributed to the creation of this iconic film, a history of the Academy Awards, and an Oscars® experience.

Kerry Brougher said, “We want the Academy Museum to add to the public’s understanding of the evolution of the art and science of filmmaking around the world—to increase appreciation for this great art form and encourage people to examine the role of movies in society. At the same time, we want to bring to life the most important reason of all for caring about the movies—because they’re magic. That’s why we intend to transport our visitors into a world that exists somewhere between reality and illusion. Like the experience of watching a movie, a trip to the Museum will be a kind of waking dream in which visitors feel as if they’ve slipped through the screen to see how the magic is created.”

Dawn Hudson, CEO of the Academy of Motion Picture Arts and Sciences, said, “It’s been 90 years since the founders of the Academy proposed creating a museum of film in Los Angeles. How thrilling to be able to deliver on that dream. The Museum’s exhibitions are as expansive and imaginative as the movies we love. With its piazza and open spaces, the Museum will be a gathering place for film lovers and will invite people from all over the world to re-experience and deepen our collective love of this art form, accessible to all.”

John Bailey, President of the Academy’s Board of Governors, said, “The Academy Museum is the realization of a long-held Academy dream to preserve movie history and to bring it into the lives of filmmakers, scholars, young people, and the worldwide public. The great resources and dedicated work of the Margaret Herrick Library and the Academy Film Archive provide a foundation for the Museum’s extraordinary installations and changing exhibitions. This Museum, created and supported by working filmmakers, will present the story of the movies in ways beyond what a traditional historical film museum can offer.”

WHERE DREAMS ARE MADE: A JOURNEY INSIDE THE MOVIES
The Museum has set several interpretative goals for its exhibitions and programs: to convey the emotional and imaginative power of film, to offer visitors a look behind the screen into how movies evolved and are made, to explore the impact of cinema on our society and the culture at large, and to ensure film’s legacy as the great art form of our time.

Where Dreams Are Made will unfold over 30,000 square feet on two floors of the Museum. It brings together evocative settings, key objects from the Academy’s unparalleled collections and the growing collection of the Museum itself, and an array of film installations.

The journey begins in the Spielberg Family Gallery, located in the Grand Lobby, with the installation Making of: The Wizard of Oz. This classic 1939 film is notable for its engaging story, groundbreaking effects, glorious Technicolor world, original musical score—in particular the exquisite voice of Judy Garland—and a cast of unforgettable characters. Visitors will experience the magic of the movie and explore the process of its creation, from the script to production design drawings and sketches, costumes, and hair and makeup tests to the final versions of the characters themselves. It is here that Dorothy’s famed ruby slippers from the Museum’s collection will be found. Finally, evidence of this film’s everlasting impact illustrates the impressive legacy of The Wizard of Oz in popular culture.

Visitors will then ascend to the Wanda Gallery on the second floor, where they will enter a corridor that acts as a transition from the real world into the dream-space of cinema. They will emerge into the dramatic Magic and Motion gallery, which evokes the age of innovation and wonder in the 19th century during which inventors created optical illusions and animations with devices that delighted audiences by making still images move and light up, bringing scenes and tales to life.

The Lumière and Méliès gallery introduces a central theme of the exhibition—the interplay in cinema between realism and fantasy—as seen in the work of the brothers Louis and Auguste Lumière on one hand, and Georges Méliès on the other. Visitors will experience some of the earliest films ever projected, brief glimpses of daily life that were the forerunners of today’s documentaries and travelogues with which the Lumière brothers astonished audiences all over the world. The delightful “trick” films and dazzling moving image fantasies of stage-magician-turned-filmmaker Méliès prefigured the limitless potential of cinematic imagination even as the medium was still in its infancy.

The Story Films gallery inside the restored iconic golden cylinder of the Saban Building will demonstrate how filmmakers around the world quickly developed camera and editing techniques that unleashed this new medium’s potential to tell stories. Visitors will see examples of the first dramas, comedies, adventures, and other genres created for the screen, as well as the first animated short films. Women played significant roles both in front of and behind the camera during this period, and this gallery’s focus on early pioneers such as Alice Guy-Blaché and Lois Weber will not only explore their stories but also survey an industry in the process of being born.

Visitors will then enter a maze of monumental screens in the Light and Shadow gallery, which features sequences from the heyday of international silent film, revealing how inventive production design, acting styles, cinematographic effects, and lighting techniques brought mood, atmosphere, and emotion to cinema, elevating it to an art form and entrancing audiences around the world.

In the Modern Times section, visitors will encounter three simultaneous moments in cinema history that demonstrate moviemakers’ ability to respond to and impact society. The first was the rise of Hollywood and powerful stars like Mary Pickford and Charlie Chaplin, larger-than-life figures who often created identifiable, sympathetic representations of the “everyman.” The second was the artistic and political eruption of Soviet cinema, particularly advances in editing and montage pioneered by Sergei Eisenstein and Dziga Vertov, who used innovative approaches to capture the drama of daily life. The third was the development of independent filmmaking in America, which sought to counter the stereotypes often created by Hollywood, including films starring all-Black casts, predominantly distributed to Black audiences—otherwise known as “race films”—and production companies formed by notable filmmakers like Oscar Micheaux, Sessue Hayakawa, and Beatriz Michelena.

Modern Times leads visitors to the largest of the second-floor galleries, The Studio System, which follows the bustle of the Hollywood assembly line from the advent of synchronized talking pictures in 1927 to the decline of the studio system in the 1960s. This gallery explores the fascinating dichotomy of the era: the “dream” of Hollywood spectacle and the “factory” that made it possible. Here, objects from the Academy’s collection, such as a backdrop from Singin’ in the Rain (1952), the doors to Rick’s Café Américain from Casablanca (1942), and the typewriter used to write Alfred Hitchcock’s Psycho (1960), as well as familiar faces and scenes from the movies themselves will bring to life the myriad people and departments that came together to create studio movies of the time. Visitors will journey through the studio to explore the artistry and also the challenges of Hollywood during its “golden age.” This gallery also highlights many of the era’s most unforgettable stars, from the dancing talents of Fred Astaire, the Nicholas Brothers, and Rita Moreno to the dramatic presence of Humphrey Bogart, Gregory Peck, and Sidney Poitier, and icons of the screen like Greta Garbo, Dolores del Rio, and Marilyn Monroe.

As visitors move to the Museum’s third floor Rolex Gallery, they will enter into the Real World. This space will reveal how filmmakers responded to the tensions and challenges of a world changed by World War II. As filmmaking techniques became more and more adaptable, with lighter-weight and more widely available equipment, filmmakers everywhere took to the streets to capture their version of reality and share slices of life on screen. Whether creating fiction films or documentaries, they helped record and shape our history. Visitors will also encounter the rapid growth of independent cinema and the individual expression that characterized movements from Italian Neorealism and French New Wave to Indian Parallel Cinema and Brazilian Cinema Novo. But this is not only a story of the past: such approaches continue to impact and influence filmmaking to the present day.

An homage to the Stargate Corridor sequence from Stanley Kubrick’s 2001: A Space Odyssey (1968)—a sequence that brought together experimental film techniques and mainstream cinema—creates a mind-bending passageway to the final section of the exhibition: Imaginary World. With the advent of new tools and technologies, cinematic visions are now limited only by the filmmaker’s imagination. Visitors will be transported to unfamiliar worlds of the past, present, and future to encounter many of the most memorable and beloved movie characters, creatures, and destinations and to hear from the filmmakers themselves how they have pushed the boundaries of filmmaking to make the impossible possible. These films, despite their imagined lands and inhabitants, often provide a mirror that urges us look at ourselves and our own world in new ways.

An endeavor of this scope requires a multi-disciplinary creative team, such as the one assembled under the curatorial leadership of Kerry Brougher and Deborah Horowitz, Deputy Director of Creative Content and Programming. Intrinsic to the development of the vision for Where Dreams Are Made is Rick Carter, Oscar-winning production designer for Avatar (2009) and Lincoln (2012). The creative team for the exhibition includes the Museum’s curatorial staff—Doris Berger, Acting Head of Curatorial Affairs; Jessica Niebel, Exhibitions Curator; Bernardo Rondeau, Associate Curator and Head of Film Programs; J. Raul Guzman, Assistant Curator; Dara Jaffe, Assistant Curator; Robert Reneau, Film Program Coordinator; and Ana Santiago, Assistant Curator—as well as producer Brooke Breton, Avatar; sound designer Ben Burtt, Star Wars: Episode IV (1977), E.T. The Extra-Terrestrial (1982); staff from the Academy’s Margaret Herrick Library and Academy Film Archive, Academy governors and members, the Museum’s advisory committee on inclusion, and a range of film scholars and filmmakers. Gallagher & Associates, specialists in interpretive and experience design, are bringing their expertise to the project in order to realize the design and installations.