Street artist Banksy, who has never revealed his identity, pulled off the biggest prank in auction history.

Auction house Sotheby’s said that they were “Banksy-ed” when a canvas of Girl With Balloon self-destructed the second it sold for £1.04 million on Friday night.

It opened with the caption: “A few years ago, I secretly built a shredder into a painting.”

The statement added: “In case it was ever put up for auction.”

Earlier on Saturday, Banksy had posted a picture of the stunt’s aftermath with the caption: “Going, going, gone…”

Banksy is notorious for his graffiti art in major cities, which can also be categorized as propoganda art. 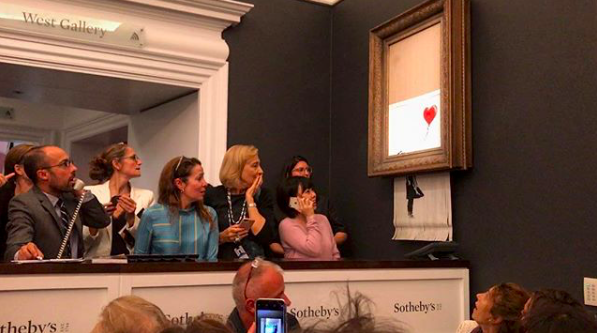 Film
Box Office: 'House With A Clock In Its Walls' & 'The Nun' Charm Theatergoers

Film
Box Office: 'The Predator' Knocks Out 'The Nun' For #1 Spot