Tune In: Harry Styles Talks Life In The Spotlight On CBS Sunday Morning 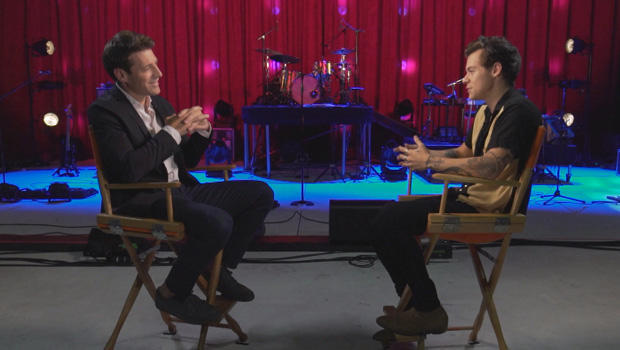 Pop music superstar Harry Styles has been in the spotlight for years, first as part of the hit group One Direction and now in his solo career, and yet he admits he still has a lot to learn, in a revealing interview with Tony Dokoupil for CBS SUNDAY MORNING to be broadcast Sunday, Oct. 15 (9:00 AM, ET).

Styles was just 17 years old when he and his bandmates in One Direction hit big early. Their debut album, Up All Night, opened atop the Billboard charts, something even The Beatles didn’t do. One Direction’s concert tours rank among the highest grossing ever. Now, Styles is earning critical raves for his solo work as well. Along the way he’s become gossip column fodder for whom he’s dating or not, and whether he’s the inspiration for other artist’s songs.

“I don’t know the answers,” Styles tells Dokoupil. “And, you know, I’m 23 and I very much feel like I’m still learning so much. I’m just kind of figuring it out.”

Dokoupil catches up with Styles in Los Angeles where they talk about his childhood, how he landed on the British reality TV series that led to One Direction, his musical influences and his new CD.

The new music, he tells Dokoupil, has a different sound than what One Direction fans have come to expect.

“I wanted it to be honest. And I wanted to love it every time that I played it,” Styles says, adding he wasn’t afraid of going in a new direction. “It didn’t feel scary to me. I think the idea of making something that I wasn’t 100% behind is much scarier to me.”