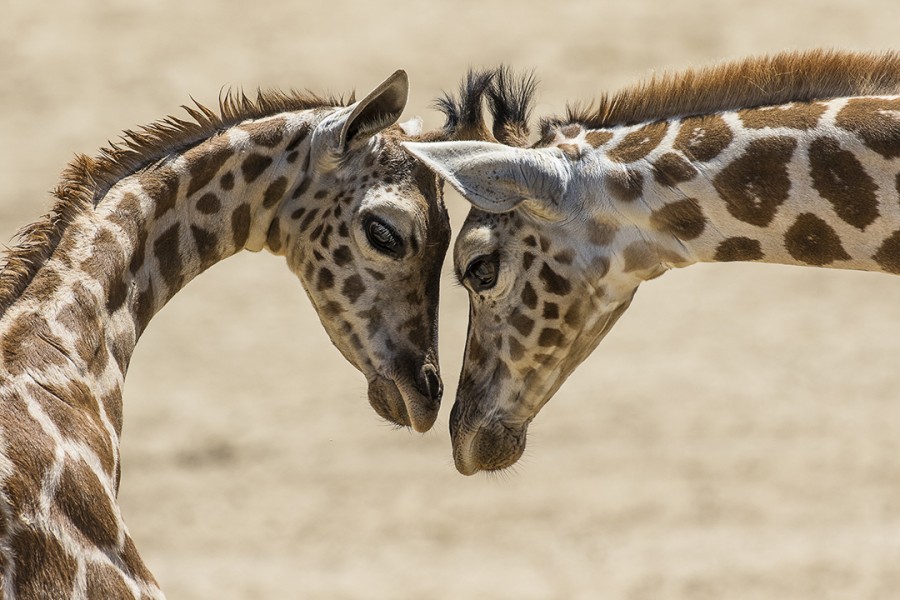 Animal care staff at the San Diego Zoo Safari Park are taking extra-special care of one of the giraffe calves in the East Africa habitat. Starting today, Congo, a 2-month-old giraffe calf, will be bottle-fed three times a day while he’s with his herd. Eileen Neff, a senior mammal keeper at the San Diego Zoo Safari Park, fed Congo his bottle this morning from the back of a keeper truck. Congo gets 2.6 liters of formula at each feeding—and he finished his bottle in about 5 minutes.

Congo is being bottle-fed by animal care staff following the death of his mother, earlier this month. The giraffe calf, who was born June 22, 2015, began taking bottles from animal care staff while he was being cared for at the Park’s veterinary hospital. He was then transitioned to a boma, or barn, in the East Africa habitat and paired up with a 2-year-old giraffe named Leroy, who was also bottle-fed as a young calf.

Congo and Leroy were re-released into the East Africa exhibit at the Safari Park this morning, and Congo was soon seen playing with two other female calves, Siri and Yamakaui. All three calves were born this summer at the Safari Park.

San Diego Zoo Global is partnering with the Giraffe Conservation Foundation to help conserve giraffes in East Africa. This year, a team of scientists from the San Diego Zoo Institute for Conservation Research has been developing a conservation project with Kenyan pastoralists, to find ways to collaborate and protect giraffes in the savanna.