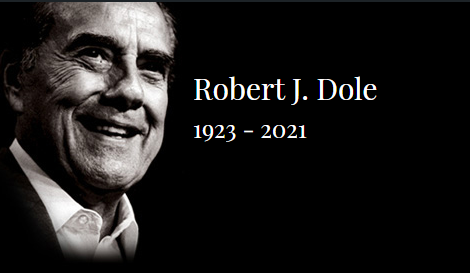 Senator Bob Dole died on Sunday. He was 98. His death was announced by the Elizabeth Dole Foundation.

Senator Bob Dole has left a tremendous legacy of service and leadership as a soldier, legislator, and statesman, a spokesperson said in a statement.

Representing Kansas in the House for eight years and the Senate for more than 27 years, Bob Dole was known as a strong partisan debater and tough negotiator who also excelled at forging bipartisan alliances to enact legislation. Born on July 22, 1923, in Russell, Kansas, Dole attended the University of Kansas, playing for the basketball and football teams and running track. He joined the army and was seriously wounded during World War II, spending years undergoing rehabilitation at a military hospital. Two of his fellow patients, Daniel Inouye of Hawaii and Phil Hart of Michigan, later served with him in the Senate. Demonstrating his ability to reach across party lines, Dole joined with liberal Democrat George McGovern to reform the federal food stamp program in 1977. He chaired the Finance Committee from 1981 to 1985 and served as Republican floor leader from 1985 until 1996, when he left the Senate to run for president. In 2000 Dole returned to the Senate to deliver a “Leader’s Lecture” to his former colleagues in the Old Senate Chamber. In 2018 Dole became only the eighth senator to receive the Congressional Gold Medal.

President Biden said in a statement:

A month after being sworn in as President, one of the first conversations I had with anyone outside the White House was with our dear friends, Bob and Elizabeth Dole, at their home in Washington. Bob had recently been diagnosed with lung cancer, and I was were there to offer the same support, love, and encouragement that they showed me and Jill when our son Beau battled cancer, and that the Doles have shown us over the half century we’ve been friends.

Like all true friendships, regardless of how much time has passed, we picked up right where we left off, as though it were only yesterday that we were sharing a laugh in the Senate dining room or debating the great issues of the day, often against each other, on the Senate floor. I saw in his eyes the same light, bravery, and determination I’ve seen so many times before.

In the Senate, though we often disagreed, he never hesitated to work with me or other Democrats when it mattered most. He and Ted Kennedy came together to turn Bob’s lifelong cause into the Americans with Disabilities Act — granting tens of millions of Americans lives of greater dignity. On the Social Security Commission, he led a bipartisan effort with Pat Moynihan to ensure that every American could grow old with their basic dignity intact. When he managed the bill to create a federal holiday in the name of Martin Luther King, Jr. — a bill that many in his own caucus opposed — I will never forget what he said to our colleagues: “No first-class democracy can treat people like second-class citizens.”

Another bipartisan effort, the McGovern-Dole International Food for Education and Child Nutrition Program, provided school meals and food for nursing mothers and young children. It saved the lives of countless young people who would otherwise have died in infancy — and brought dignity to tens of millions of families at home and abroad. This work, for Bob, was about more than passing laws. It was written on his heart.

Bob was an American statesman like few in our history. A war hero and among the greatest of the Greatest Generation. And to me, he was also a friend whom I could look to for trusted guidance, or a humorous line at just the right moment to settle frayed nerves. I will miss my friend. But I am grateful for the times we shared, and for the friendship Jill and I and our family have built with Liddy and the entire Dole family.

Bob was a man to be admired by Americans. He had an unerring sense of integrity and honor. May God bless him, and may our nation draw upon his legacy of decency, dignity, good humor, and patriotism for all time.

Lifestyle
Raging Waters LA Is Ready To Launch Bombs Away