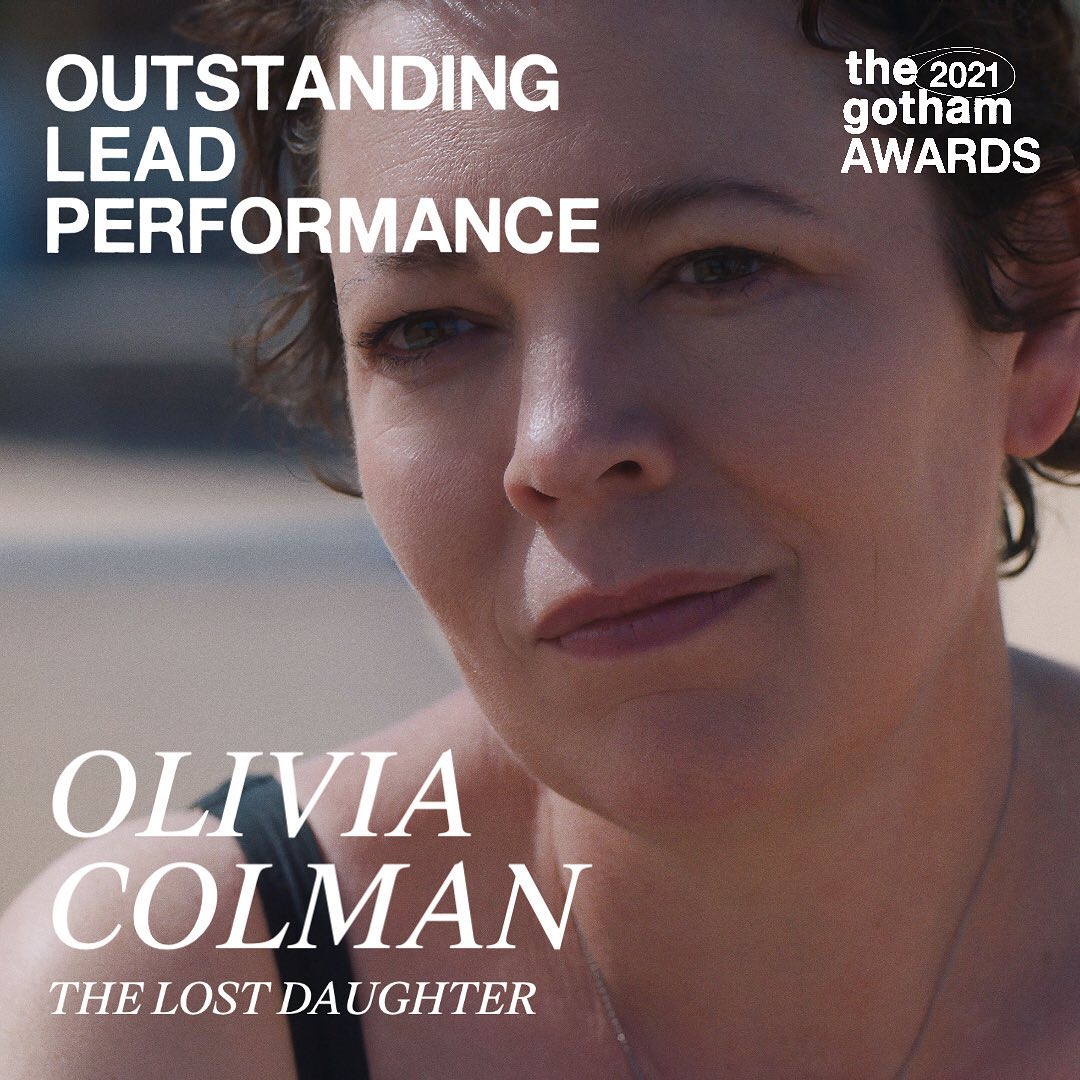 The Gotham Film & Media Institute (The Gotham) tonight announced the winners of the 31st Annual Gotham Awards at a ceremony held at Cipriani Wall Street in New York City.

Winning Best Feature and three additional awards was The Lost Daughter, director and screenwriter Maggie Gyllenhaal’s assured screen adaptation of Elena Ferrante’s novel about a solitary vacationing professor and mother of two grown daughters whose encounters with a different young mother provoke haunting memories of her own past. Maggie Gyllenhaal also scored two additional individual awards for Best Screenplay and the Bingham Ray Breakthrough Director award given to a director for their first fiction feature film. Gyllenhaal had previously won a Gotham Award nineteen years ago in 2002 as Breakthrough Actor for her performance in Secretary. And for her performance as Leda, the complex central character of The Lost Daughter, Olivia Colman received the Outstanding Lead Performance award, having previously received a special Ensemble Performance award in 2018 as part of the lead trio of The Favourite.

Also receiving an Outstanding Lead Performance award was Frankie Faison for his brilliantly varied and devastating performance in The Killing of Kenneth Chamberlain, based on the true story of the resulting tragedy when police were sent to check on an elderly veteran with physical and mental health issues after his medical alert link was accidentally triggered.

Receiving the Breakthrough Performer award was Emilia Jones for her sensitive–and musical –lead role as a child of Deaf parents torn between her responsibility to her family and the possibility of a future of her own in CODA, for which actor Troy Katsur won the Outstanding Supporting Performance award for playing her funny, opinionated dad who is fearful of losing her but yearning to connect and understand her.

The award for Best Documentary Feature was presented to Flee, the stirring, mostly animated documentary by Danish filmmaker Jonas Poher Rasmussen which recounts the multi-year history from childhood until now of Amin Nawabi (a pseudonym), who with his mother and siblings became refugees fleeing the Taliban in Afghanistan, through Russia, and eventually to Denmark where, despite trauma and a hidden past, there’s possibility for Nawabi of a new home and lasting love.

Winning the award for Best International Feature was Drive My Car, directed by Ryûsuke Hamaguchi, adapted from a short story by Haruki Murakami into a gently emotional epic in which an actor/director harboring an unspoken grief and anger embarks on directing a multi-language production of Uncle Vanya in another city and gradually opens to his assigned driver, who has losses of her own.

With the awards for television the Gotham Awards for debut series are given annually to those that “enrich the landscape or push the boundaries of television.” Winning the award for Breakthrough Series (Over 40 minutes) was Squid Game, the late-breaking global sensation from Korean writer/director Hwang Dong-hyuk and Netflix that weaves themes of universal economic and social divide and aggressive capitalism with dazzling set pieces, ultra-violence, and even tender moments.

Breakthrough Series (Under 40 minutes) was awarded to Reservation Dogs, created by Sterlin Harjo and Taika Waititi, which follows a group of teens living on a reservation in Oklahoma and whose petty crimes fuel dreams of escaping to a new life in California. The comedy series is a first to be majority written, directed, acted, and crewed by people of Indigenous descent.

Newly created this year was the first Gotham Award category for series acting – Outstanding Performance in a New Series. Following the Gotham Awards guidelines for gender neutral categorization, there were ten nominees. The jury chose to award two performances “equally undeniable in their craft and staying power” – to Thuso Mbedu, transcendent in the frequently silent central role of Cora in The Underground Railroad and Ethan Hawke in a possible career-best performance as abolitionist John Brown in The Good Lord Bird.

Also added as a new standalone category this year was Breakthrough Nonfiction Series. The winning series was Philly D.A., the propulsive, narratively driven, verité-shot series, created by filmmakers Ted Passon, Yoni Brook, and Nicole Salazar, that follows the first term of crusading Philadelphia District Attorney Larry Krasner, elected in 2017 determined to reform the system from within and with the goal of ending mass incarceration.

Career Tributes were also given during the ceremony to performers Kristen Stewart (presented by Julianne Moore and Pablo Larraín) and Peter Dinklage (presented by Ethan Hawke), director Jane Campion (presented by Mark Ruffalo), and the Industry Tribute to Eamonn Bowles (presented by Alex Gibney).

The inaugural Icon Tribute (presented by Kia Brooks, Deputy Director of The Gotham and Seret Scott) was awarded posthumously to poet, playwright, writer, filmmaker, director, civil rights activist, and educator Kathleen Collins and was accepted by her daughter, Nina Lorez Collins. Kathleen Collins’ most known film work is Losing Ground, one of the very first fictional features by an African-American woman filmmaker. The Icon Tribute has been created to call attention to the boldness, artistry, and impact of a filmmaker from a marginalized community whose work has not been previously recognized by the organization in its previous awards history.

An Impact Salute (presented by Michael Bloomberg) was given to The Actors Fund in recognition of their leadership role in providing resources, care and financial support to members of the entertainment community during the COVID-19 pandemic. Founded in 1882, the nonprofit serves all professionals—and not just actors—in film, theater, television, music, opera, radio and dance through programs that address the community’s unique and essential needs. Brian Stokes Mitchell accepted on behalf of The Actors Fund.

Additionally announced during the ceremony:

Questlove announced the creation of a $150,000 scholarship fund earmarked for HBCU students’ tuition and to allow participation in the Gotham EDU suite of programs and mentor support. The scholarship is supported by iHeartMedia.

Tessa Thompson announced the winners of the third annual showcase supported by sponsoring partners Focus Features and JetBlue. The program is designed to discover and empower a diverse group of emerging filmmakers and foster multi-platform distribution of their work. Each winner receives a $10,000 grant and have their films shown for twelve months on JetBlue’s seatback entertainment systems under the “Gotham Selects” movie category and on Focus Features digital streaming platforms. Throughout 2022, winning filmmakers will also receive ongoing mentorship and workshopping opportunities from The Gotham.

The winning filmmakers and shorts were:

For photo selects from the event, visit https://dam.gettyimages.com/assignments/2021-gotham-awards

For Best Documentary, presented by Devery Jacobs and Michael Greyeyes

Released by Sideshow and Janus Films

Olivia Colman in The Lost Daughter

Frankie Faison in The Killing of Kenneth Chamberlain

Maggie Gyllenhaal for The Lost Daughter

Maggie Gyllenhaal for The Lost Daughter

For Breakthrough Series (Over 40 Minutes), presented by Marlee Matlin and Troy Kotsur

For Breakthrough Series (Under 40 Minutes), presented by Marlee Matlin and Troy Kotsur

FYI
"A Christmas Carol" Returns To The Ahmanson Theatre

Television
2021 American Music Awards: And The Winners Are