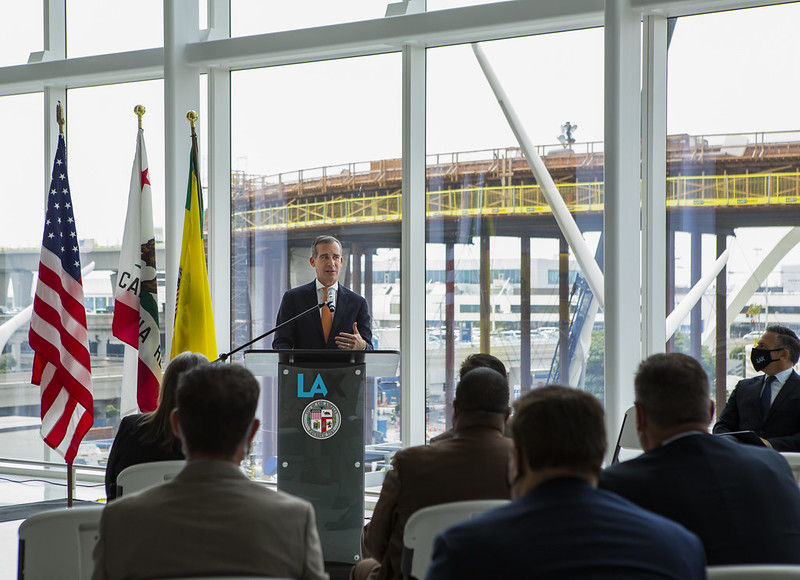 Mayor Eric Garcetti today broke ground on the Airport Metro Connector (AMC) Project, a $898.6-million endeavor that will directly connect the Metro system to the Los Angeles International Airport (LAX) when complete in 2024.

"Everyone traveling to or from LAX should have access to modern, reliable public transportation that gets them to their destination on time," said Mayor Eric Garcetti. "The Airport Metro Connector is a historic step toward reimagining how travelers experience our airport — a turning point that will be a source of jobs and economic growth, reduce congestion, and help our airport realize its potential as a world-class gateway to Los Angeles."

The Airport Metro Connector Project (AMC) is the ninth station along the Crenshaw/LAX Line currently under construction. When complete, it will connect directly with the Los Angeles World Airports (LAWA) Automated People Mover project — a train  connecting travelers directly to airport terminals that is expected to be complete in 2023.

"This is an exciting project that will serve as the "Gateway" to LAX for future generations — just as LAX has long served as the gateway to Southern California for so many millions of people," said Metro CEO Stephanie Wiggins. "The AMC station will also provide multiple connections to the Metro system and will help airport-area employees and travelers easily get to wherever they need to go in our region."

The rail station portion of the project will contain two platforms that will be accessed via escalators and elevators, ADA compliant swing door faregates, and a full roof covering over the entire platform.  The project has been designed to achieve a Leadership in Energy and Environmental Design (LEED) Gold rating with sustainable features that include 550,000-plus kilowatts of solar panels, large native landscaping areas, and electric bus charging stations.

LAX is in the midst of a $14.5 billion Capital Improvement Program, the largest airport project of its kind in the nation. The overhaul touches all nine passenger terminals and builds new facilities, including an Automated People Mover train; a Consolidated Rent-A-Car facility; and the Intermodal Transportation Facility-West, a 4,300 stall parking structure.

After Mayor Garcetti helped lead the coalition to pass Measure M in 2016, the largest local transportation funding program in North American history, Metro is expanding its rail transit system with 15 new and expanded lines, fixing streets and freeways, and putting more than 777,800 people to work for decades to come.