Film Review: Supernatural Scares Highlight ‘The Conjuring: The Devil Made Me Do It’ 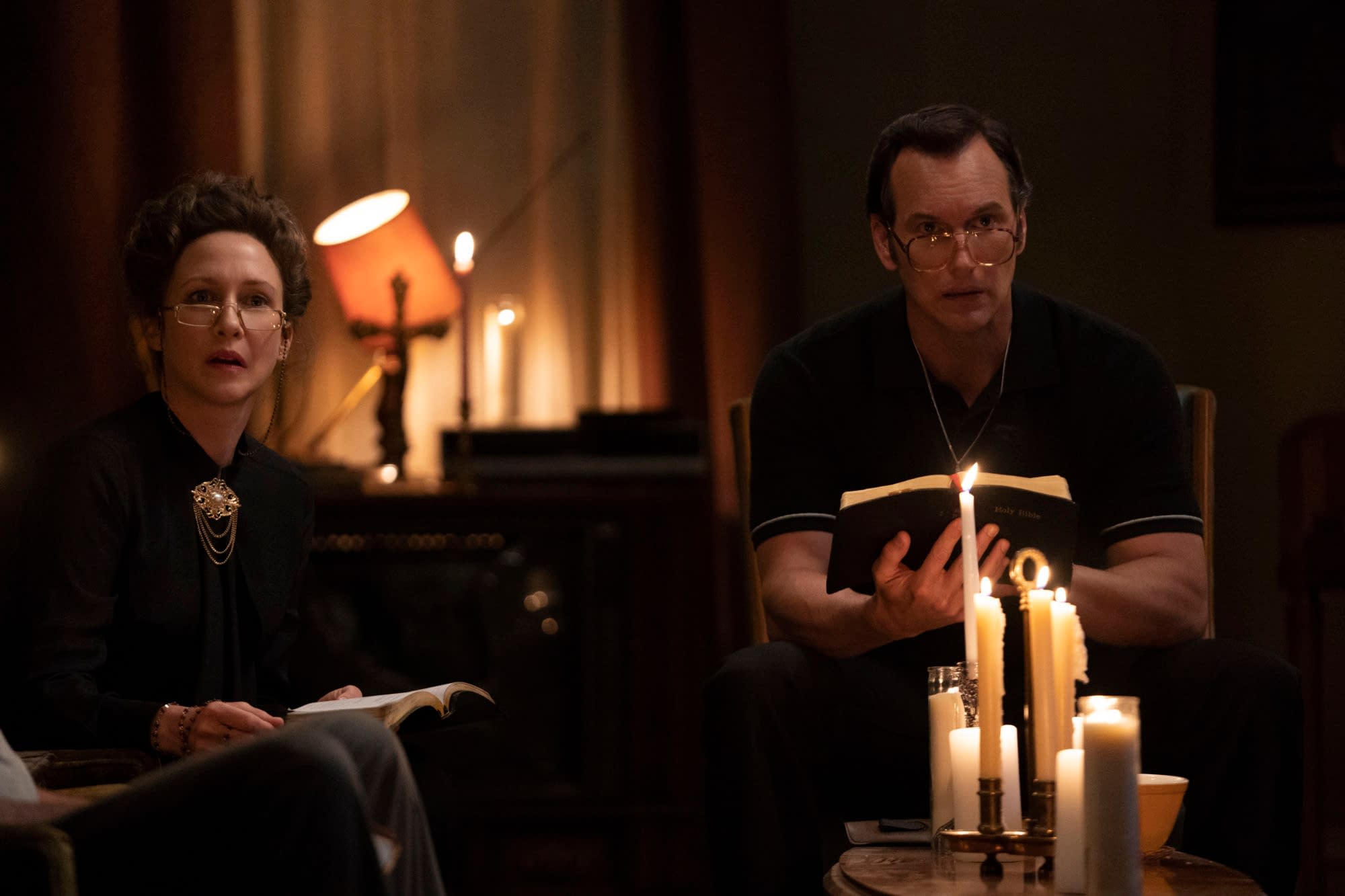 Vera Farmiga and Patrick Wilson return for another round of supernatural scares playing real-life paranormal investigators Ed and Lorraine Warren as they take on one of the most sensational cases in their files in “The Conjuring: The Devil Made Me Do It,” a sufficiently spooky sequel to the hugely popular franchise.

Marking the third “Conjuring” film and the eighth film in the overall “Conjuring Universe,” this undeniably over the top but mostly effective horror flick is elevated by its compelling real-life characters played to the hilt by franchise mainstays Wilson and Farmiga, even if this latest installment sometimes sacrifices logic for terror. With his sophomore feature following his underwhelming take on the Latin American folktale, “The Curse of La Llorona,” director Michael Chaves rebounds with a franchise film that in look and vibe adheres closely to the aesthetic cultivated by “Conjuring” creator James Wan, who retains producer credit here, resulting in a sequel that will satisfy franchise fans but is unlikely to reel in the unconverted. Centering on the first case in U.S. history when a murder suspect claimed demonic possession as a defense, the setup of David Leslie Johnson-McGoldrick’s so-so script suggests that audiences should expect more of a detective crime thriller than the usual haunted house premise of the previous films, but much of the Warren’s investigation gets sidetracked by outlandish scares along the way to a forgettable finale. Still, even if the audience may feel cheated by the lack of focus on the actual court case, there is more than enough moments of nail-biting chills to please the horror fans and conjure up some box office success.

A sequel to the original film as the second installment was a prequel, “The Devil Made Me Do It” is set in 1981 and centers once again on paranormal investigators Ed and Lorraine Warren (Patrick Wilson and Vera Farmiga), who at the outset come to the exorcism of David Glatzel (Julian Hilliard), a young child in Brookfield, Connecticut who is possessed by a demon. Arne Johnson (Ruairi O’Connor), the boyfriend of David’s older sister Debbie (Sarah Catherine Hook) is also present during the exorcism, and when he voices disapproval over Ed’s efforts to rid the boy of the evil spirit, the demon seemingly flees David’s body and takes up residence in Arnie, unbeknownst to those present. Months later, while Arne is visiting Debbie at the kennel where she works, the demon possessing him causes him to brutally kill Deb’s hard-drinking manager Bruno Sauls (Ronnie Gene Blevins), resulting in his arrest.

When Ed and Lorraine catch wind of the sensational story that grabs headlines and captures the community’s attention, they convince Arne’s skeptical attorney that Arne’s plea should be not guilty by reason of demonic possession, a plea that had never been tried in the United States but had been used twice before in cases in England. Convinced that Arne’s demonic possession was the result of a curse placed by someone, when the Warrens find a witch’s totem underneath the Glatzer home, they call upon local detectives to discuss whether similar objects have been discovered in other cases. But with Ed severely debilitated by a heart attack, Lorraine is forced to call upon her clairvoyant powers to crack the case, leading the detective duo down some dangerous paths along the way.

Despite the implausible aspects of the storyline, and the Warren’s investigation veering down an increasingly nonsensical path, the supernatural thrills that define “The Conjuring” universe remain very much intact in this latest installment, and director Michael Chaves does an excellent job carrying the torch lit by franchise helmer James Wan. Once again collaborating with members of the creative team that worked on previous installments, “The Devil Made Me Do It” stands out for its haunting cinematography by Michael Burgess, memorable production design by Jennifer Spence, creepy score by Joseph Bishara, and effective editing by Peter Gvozdas and Christian Wagner. Even though the script by David Leslie Johnson-McGoldrick never quite comes together in satisfying fashion, feeling at times like separate stories sewn together without much regard for dramatic structure, there is just enough intrigue in the Warren’s investigation and standalone moments of menace to bring this scare fest to the finish line.

“The Conjuring” franchise has become a billion dollar box office phenomenon thanks to the commitment and quality of performances of the two leads portraying real-life paranormal investigators Ed and Lorraine Warren, Patrick Wilson and Vera Farmiga. Although Wilson has been more at the forefront of the previous installments, here Farmiga takes center stage, and the results are impressive, relying largely on her nonverbal acting to sell the supernatural aspects of the premise. Also putting in an impressive showing in the supporting cast is Ruairi O’Connor as the killer using demonic possession as grounds for a not guilty plea, while Sarah Catherine Hook also excels as his beleaguered girlfriend Debbie.

“The Conjuring: The Devil Made Me Do It” has just enough scares to satisfy the franchise’s loyal fan base.

Rated R for terror, violence, and some disturbing images.