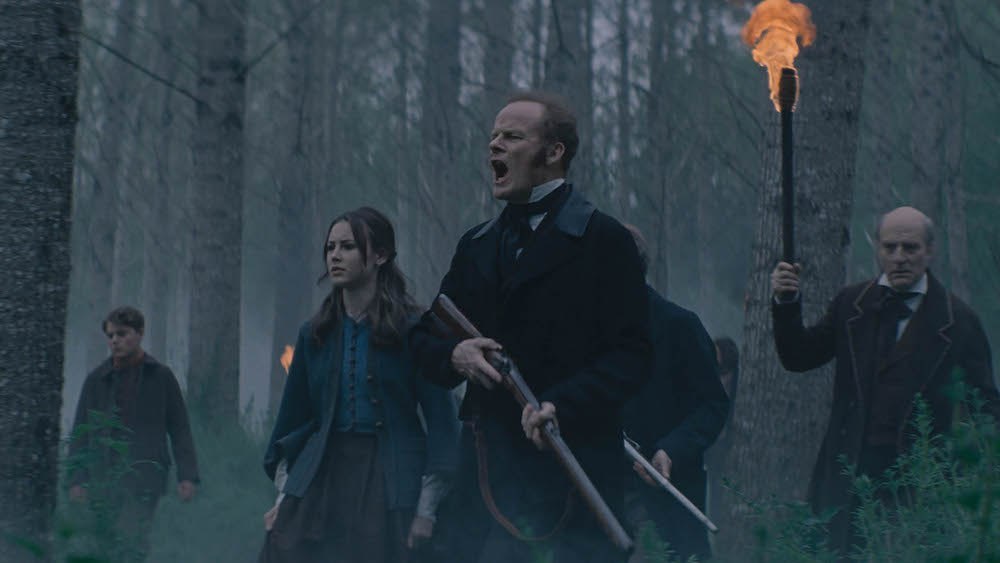 A pathologist in the late 1800s investigates a beastly attack against the townspeople of a remote village only to discover a much more evil element at work in “Eight for Silver,” a supremely spooky update of the werewolf legend starring Boyd Holbrook, Kelly Reilly, and Alistair Petrie.

Written and directed by British filmmaker Sean Ellis, this frightful entry in the horror genre makes up in scares for what it lacks in depth, offering audiences a gory and macabre fable that grabs your attention from the start and doesn’t let up. With a suspenseful script that adheres to the classic werewolf tale but is original enough to stand firmly on its own, bold direction that enhances the scary storyline at every turn, and striking cinematography that brilliantly captures the fog-shrouded landscape, “Eight for Silver” fully delivers on its wicked premise. Beyond the audacious filmmaking on display, this first-rate fright flick is elevated by an exceptional international star, Boyd Holbrook, most notably “Narcos,” as the pathologist investigating the horrific happenings, and Kelly Reilly as the mother of a local child who goes missing.

Set in the French countryside of the late 1800s, “Eight for Silver” follows the sinister events around a remote village, which is also the site of a recent attack against a community of gypsies who were brutally murdered after settling in the area. One of the men who carried out the attack, a wealthy landowner named Seamus Laurent (Alistair Petrie), has had an unsettling feeling ever since, and for good reason. A wild beast seems to be on the loose, as evidenced by the mangled body of a fourteen year-old boy discovered on the outskirts of town, while the friends of this child are plagued by visions of evil forces.

When Seamus’ son also goes missing, he calls in pathologist John McBride (Boyd Holbrook) to determine if the attacks were carried out by a wild animal, or some other sinister force. Laurent and his wife Isabelle (Kelly Reilly) try to keep their daughter safe as McBride looks into the disappearance of their son, staying at their family home all the while, but it soon becomes clear that the beast in question is of the supernatural variety, and no one is safe from its evil intentions.

A wonderfully atmospheric horror film, “Eight for Silver” is a bone-chilling entertainment that earns its scares thanks to the inventive and assured direction of Sean Ellis, whose tonal command over this morbid material is something to behold, and whose effectively suspenseful screenplay keeps viewers thoroughly captivated throughout. In addition to scripting and directing, Ellis also took on cinematography duties for this creepy enterprise, and the results are about as eye-popping and award-worthy as it gets. From the hauntingly beautiful landscapes to the candlelit interiors, the visuals of “Eight for Silver” are vital to the film’s overall eeriness, and stay with you long after the credits roll. Also helping achieve this tone of terror is the aptly unsettling score by Robin Foster and the jarring editing of Yorgos Mavropsaridis and Richard Mettler.

Although “Eight for Silver” stands out for its superlative filmmaking, one can’t overstate the importance of the fantastic performances from the exceptional cast members, all of whom really help to sell the supernatural storyline. Playing the pathologist who is called in to investigate the mystery, Boyd Holbrook gives one of the more well-rounded performances of his blossoming career, and serves as the audience stand-in as he explores the evil doings around the remote village. Kelly Reilly (“Flight”) is reliably excellent as a strong-willed mother who is desperate to keep her daughter safe, while Alistair Petrie also excels as the tortured father who sees a connection between his past mistakes and his current predicament.

“Eight for Silver” is a horror flick that will creep you to your core.

This film is not yet rated.