Remember 'Teen Wolf?!' We know the fans do. When the show was trending, LATF met with actress Holland Roden. For this #FlashbackFriday, we're sharing our interview and photo shoot! Next up, Holland will appear in FOLLOW ME and ESCAPE ROOM 2. 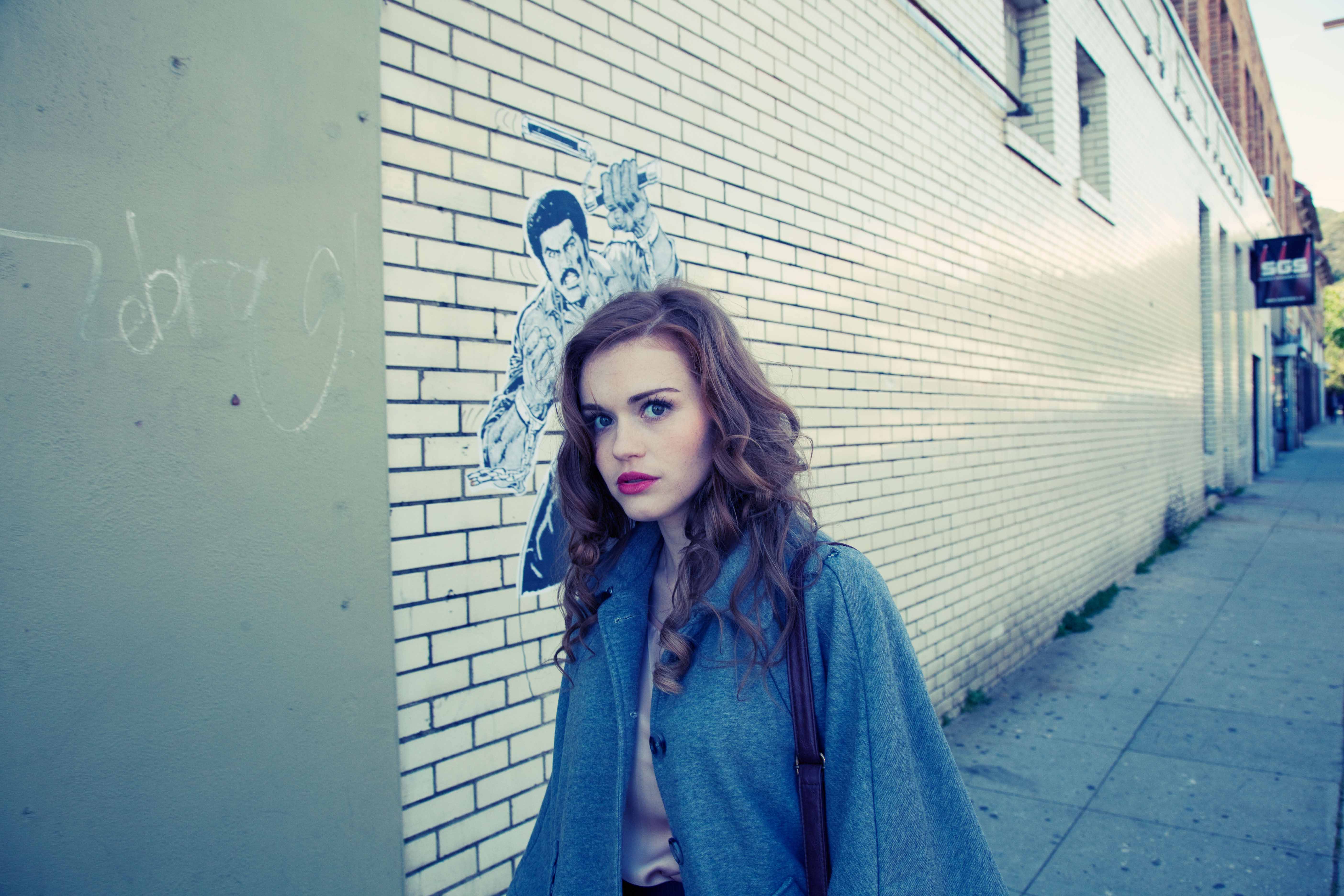 On the day of Holland’s interview, she looked like the epitome of a pinup girl with her 1950’s retro pinstripe shorts, perfectly curled long red locks, and her bright red lipstick. Even though she came straight from an audition, Holland admitted, “I always dress like this!” It’s easy to like Holland from the start as she’s overtly quirky and spirited. When I asked how she got her name, Holland wished she had a less mundane story than; “When my mom was a camp counselor in college, she had a camper named Holland.” Her acting career is not boring at all. In fact, it got off to a great start when she booked HBO’s “12 Miles of Bad Road,” with Lily Tomlin, followed by  guest starring roles on “Lost,” “Weeds,” “Criminal Minds” and “Cold Case.” She was also a lead in the cult classic franchise, “Bring It On: Fight to the Finish.” Holland’s life is sure to change on June 5th when MTV premiere’s their anticipated supernatural drama, “Teen Wolf.” Like most fantasy TV shows and movies since “Twilight,” “Teen Wolf” will most likely have a large fan following. These days, anything that has to do with werewolves or vampires is a success. She assured me that MTV’s “Teen Wolf” isn’t at all like the 80’s comedy with Michael J. Fox. In the more dramatic TV version, Holland is the smart mean-girl amongst a few dashing werewolves. “Teen Wolf” is one of many exciting projects coming up in Holland’s career. She recently graduated from UCLA and plans on attending Nursing school. Holland told LATF about her life as an actress and an academic…

LATF: I read that you have a fascination with the Queen of England and you used to put on plays for your parents. How did you go from playing “dress up” to TV?

HOLLAND: Wow, we’re coming full circle now! Yes, I would put on these ‘one little girl’ shows. I was actually playing Princess Diana, but somehow I got her confused with the Queen of England. Every single show would be a different adventure. One show she would go back in time with James Bond to the Titanic, and one time there was an alien invasion. I always enjoyed performing and didn’t even realize it was acting. Later on, I transferred from an all girls’ private school to a public High School. I did not mesh well so I started to do student films and local community theatre in Texas to build a friend base. After that, I got a local agent from the acting classes I was taking outside of school.

LATF: You’ve guest starred on a lot of primetime TV shows. How is it to be a regular now on “Teen Wolf”?

HOLLAND: My first regular role was on HBO’s “12 Miles of Bad Road”, which was six episodes. It’s funny because I played this bratty girl and I’m usually the slightly quiet vulnerable girl. When “Teen Wolf” came about, my agent asked me which character I wanted to go out for. Lydia was described as ‘just walking off the runways of Milan’ and Allison was the ‘quiet vulnerable new girl’. I said, “Mark my words, they will never hire me as Lydia! I’m not a supermodel, I’m 5’3!”

LATF: Sure enough, you were cast as Lydia Martin.

HOLLAND: Typically, Lydia is the ‘bitch’ and the queen bee of the school. From the very beginning, I’ve tried to find a hybrid of movie characters to describe her. I always say that Lydia is a combination of Tracy Flick from “Election” and Violet Beauregarde from “Charlie and the Chocolate Factory”. Hopefully, Lydia is loveable at the end of the day because she’s so delusional; walking around thinking that she’s the epitome of ‘great’. She’s calculating and somewhat of a dark horse, until you peel back her onion throughout the season. I laugh at her. I approached our creator, Jeff Davis and asked if we could make Lydia the smartest girl in school. There are not a lot of ‘popular girl’ characters who also have the intelligent factor. Jeff was on board and has given us a lot of leeway for character development. 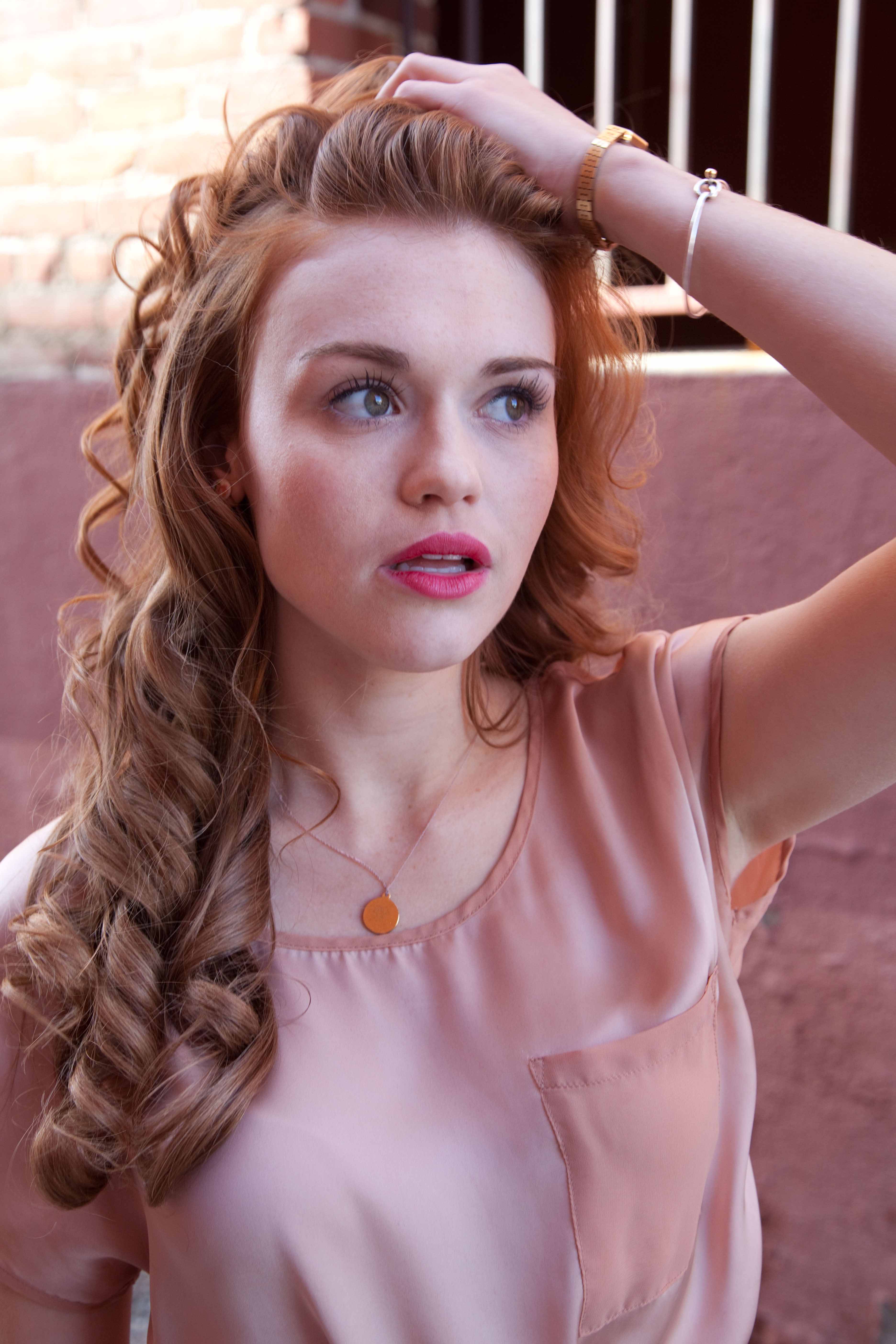 LATF: Were you familiar with the original “Teen Wolf” when you auditioned for MTV’s version?

HOLLAND: I was! I’m a huge Michael J. Fox fan. “Back to the Future”, one, two and three are some of my favorite movies! Lydia wasn’t based off of any previous characters from the movie, “Teen Wolf”.

LATF: What is MTV’s new twist on the story?

HOLLAND: It’s a lot darker and has the same kind of tone as the film, “The Lost Boys.” Jeff Davis, created “Criminal Minds.” The rest of the writing team are from shows like; “Fringe”, “Lost” and “The 4400.” The show has the intense tone of a one-hour drama. It’s a lot sexier. You want to kiss our werewolves!

LATF: I’ve read that some cult fans of the 80’s original are unhappy with the more dramatic approach to the TV show. Have you heard about the critiques and what do you think of them?

HOLLAND: I think most of them are mad because of the name “Teen Wolf”. They remember it as the comedic cult classic. As Jeff Davis said, “The reason why we named it “Teen Wolf,” is because he’s a teen and he’s a wolf.” If you have that comedic vision in your mind, we’re not that. We are a reinvention, not a re-make. MGM, who created the original “Teen Wolf”, is on board with us.

LATF: Are you a fan of any supernatural shows or movies?

HOLLAND: I’m an old school witch fan. I was big into “Practical Magic” and “Hocus Pocus”. 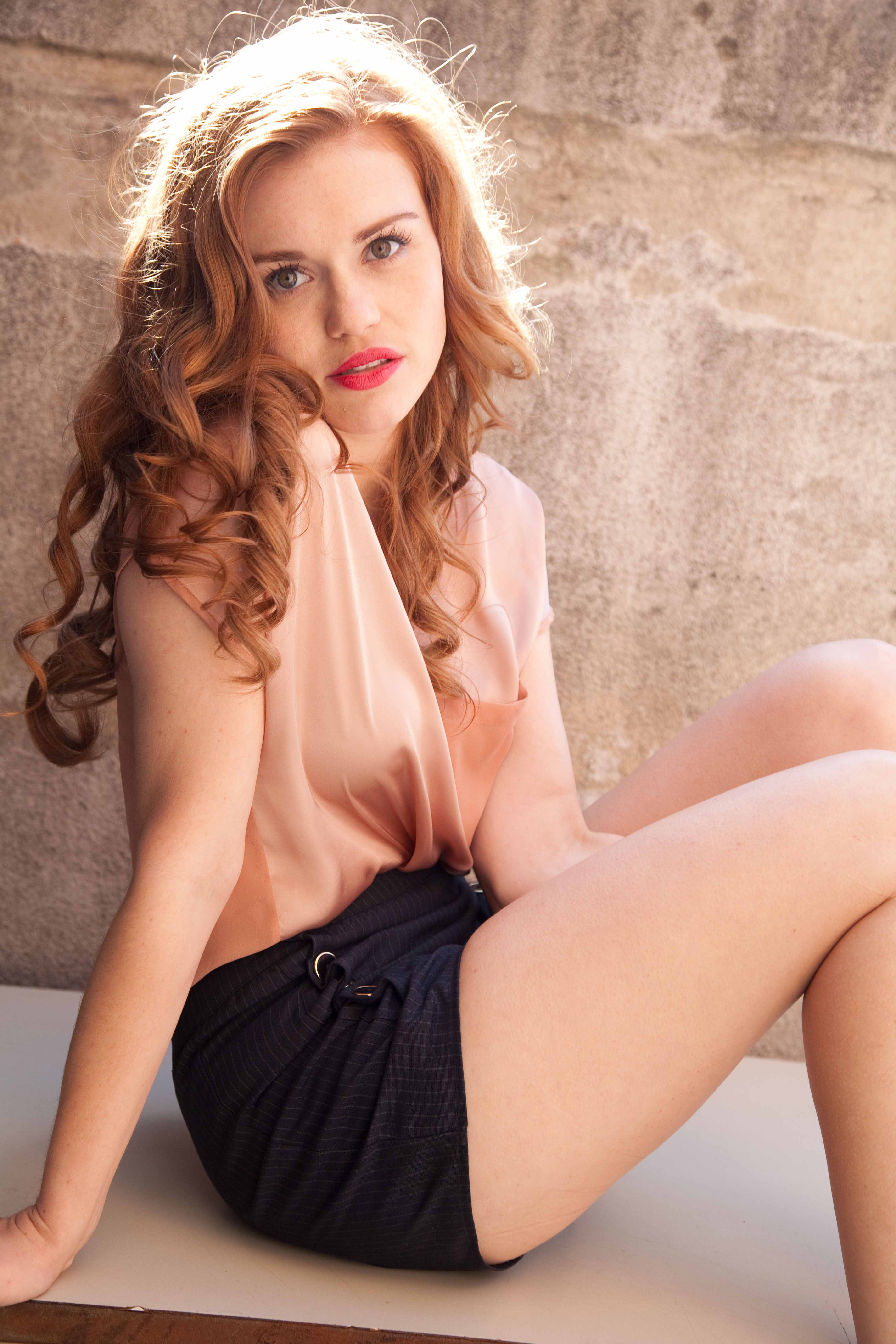 LATF: Everyone has their favorite: Vampire or Werewolf. Which one is yours?

HOLLAND: Our werewolf, Scott McCall… obviously! He’s not this sexy and brooding character. Instead, he’s offbeat and a real guy who you can relate to. That’s what I like about what MTV is doing. They’re known for making things relatable. We’re ordinary kids in extraordinary situations. “Twilight,” “True Blood” and “Vampire Diaries” have really opened the door for fantasy again. I’m excited that we get to be a part of that.

LATF: You’re quite the academic, from majoring in molecular biology at CSU Northridge to graduating UCLA with a degree in women’s studies. Why did you make such a jump in majors?

HOLLAND: My dad could probably answer that best! He’s a doctor so I grew up watching his surgeries and I love science. I thought, “Acting is worlds away from me in Texas, so I’ll go to college in LA and see how it goes.” I started acting my sophomore year while studying molecular biology. My dad said, “You can’t handle both.” I said, “Watch me, I will!” Of course, I didn’t. (Laughter) I couldn’t be in the lab when I was gone shooting. So Nursing was the answer to how I could chase the science dream while acting.

LATF: What do you want to do with your degree?

HOLLAND: Now I have my B.A. in women’s studies so I’ve applied to Nursing Schools. I might go back and get my masters in TV and Film. I crash my friend’s classes now and take notes on my one free night!

LATF: Are you interested in working behind the camera?

HOLLAND: I would love to produce, because I enjoy finance and casting. In a dream world, I’d like to start my own production company.

LATF: I came across an indie music video you were in on YouTube. “Light, Lost” by Seasons. Do you kow the band?

HOLLAND: No! I actually met the director, Christopher Ewing after I saw this music video called; “Our Younger Noise” by “Letting Up Despite Great Faults.” I just e-mailed him when I saw his name in the rolling credits and said, “I would love to be a part of what you’re doing. I’ll work for free!” Sure enough, after sending him my reel, he called me up a few weeks later and said, “I think I have a job for you!” We shot it in 115 degree weather on a hippie commune with no makeup, no hair and no stand-ins. It was gorgeous! 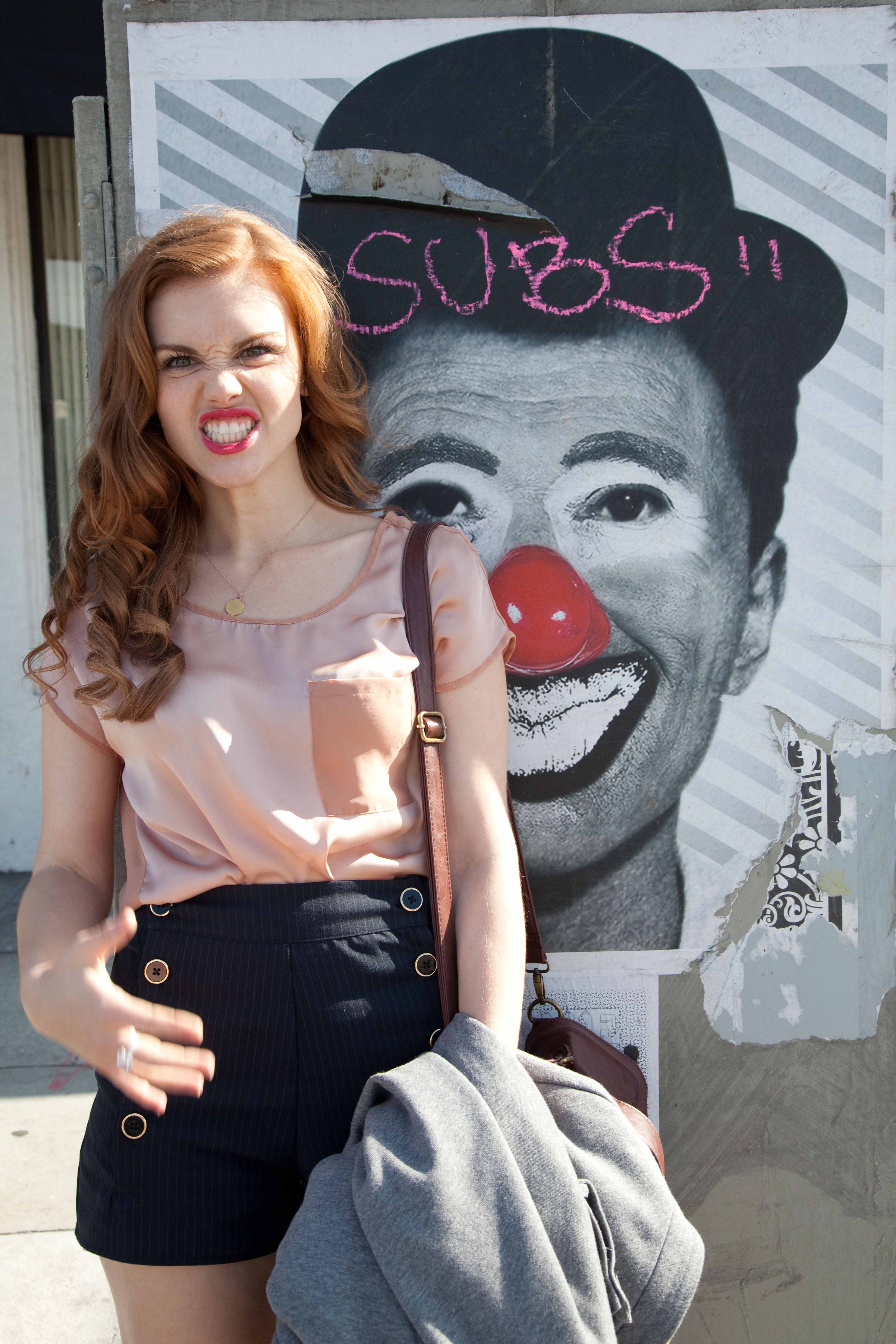 LATF: You also like artists like Ingrid Michaelson and the Crash Kings. Are you really into the indie music scene?

HOLLAND: I guess I am. I appreciate artists like Josh Rouse and “Cloud Colt” from Minnesota.

HOLLAND: Ooh, “Foster the People” are good! “Kids of 88” are a great band! They’re from New Zealand and they did an episode of “Teen Wolf”.

LATF: Do you have a new project now that you’re waiting for “Teen Wolf” to air?

HOLLAND: I just finished shooting an episode of “Memphis Beat.” I would love to do a film on my hiatus! It’s my first time acting in LA without being in college. I am going to try and do an internship at KCRW for DJ’ing!

Hey, KCRW… what are you waiting for? Holland has some free time on her hands so put her on the air! With all this “Teen Wolf” talk, I’m eager to watch it on June 5th and see what it’s all about. 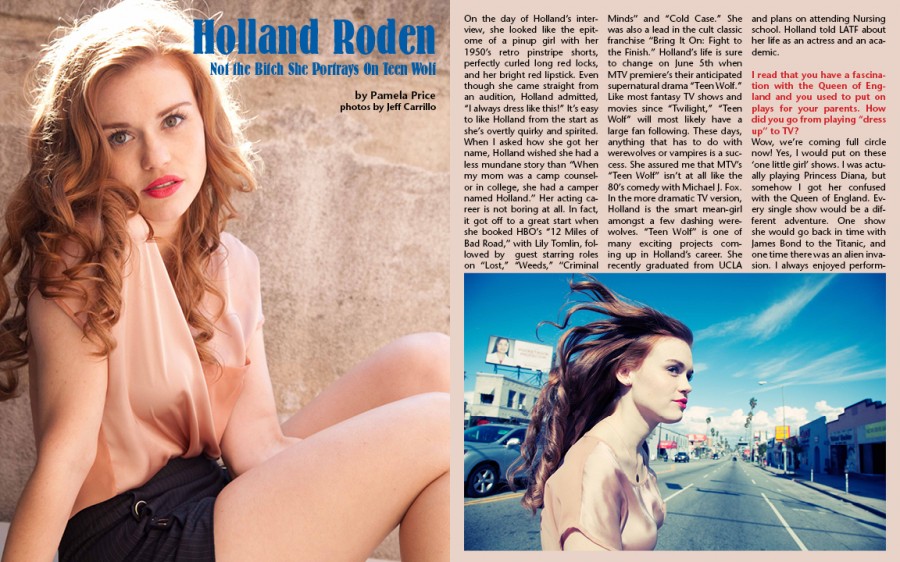 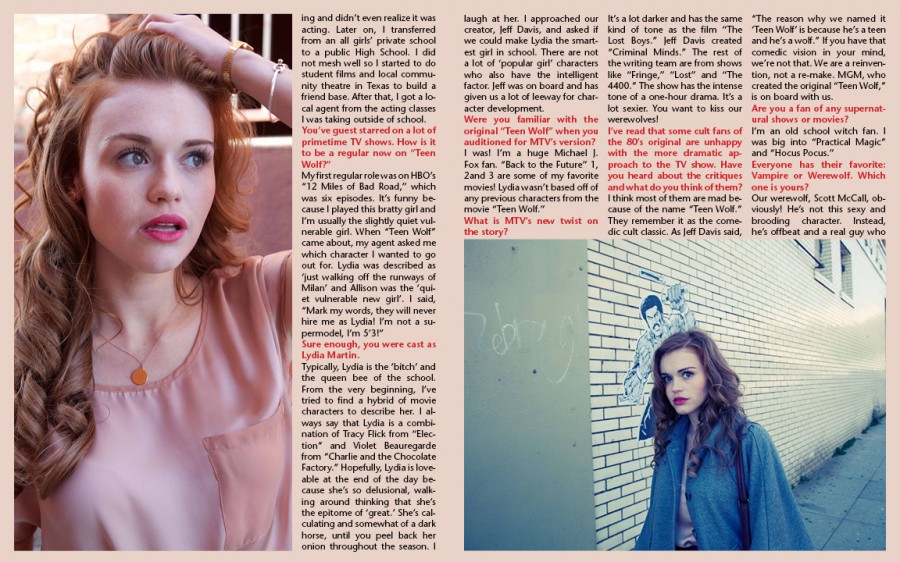 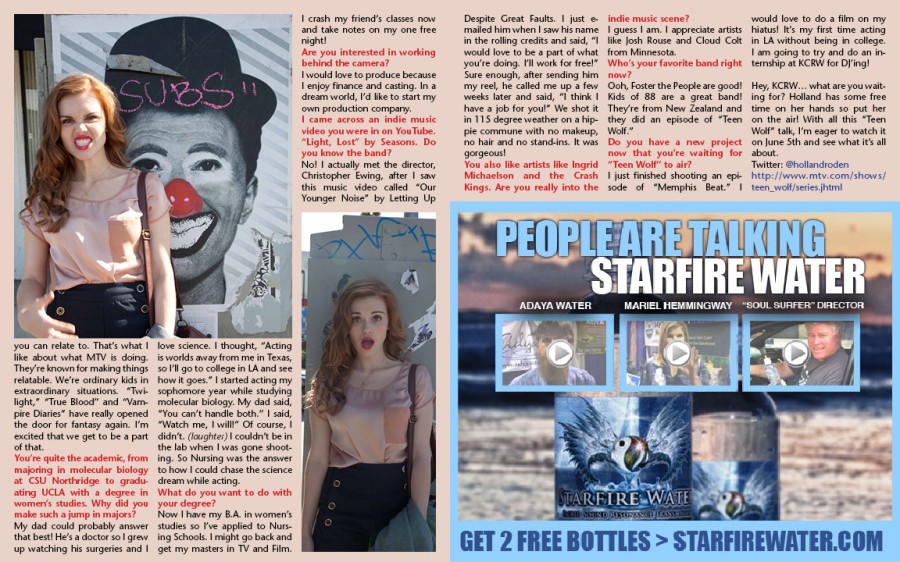 FYI
What You Need To Know: Independent Contractors in California

Lifestyle
How To Create Your At-Home Gym