Tune In: Frosty The Snowman & Holiday Classics Return To TV 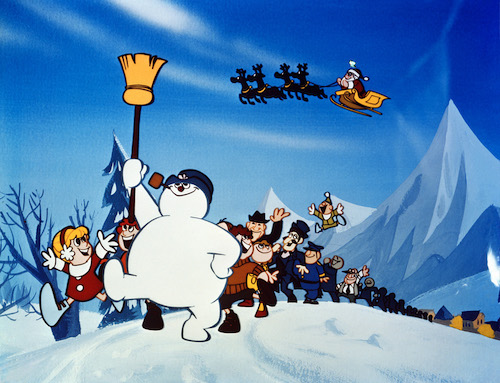 This holiday season, CBS continues its merry tradition as a destination for annual broadcasts of the beloved classics RUDOLPH THE RED-NOSED REINDEER and FROSTY THE SNOWMAN, as well as encore presentations of the animated specials FROSTY RETURNS, THE STORY OF SANTA CLAUS and ROBBIE THE REINDEER, which is voiced by an array of celebrities, including Ben Stiller, Britney Spears and Hugh Grant.

Following is the schedule for CBS’ animated holiday specials:

Frosty, that “jolly, happy soul” whose old silk hat full of magic has turned him into a musical Christmas legend, once again demonstrates his unique showmanship. Narrated by Jimmy Durante, the special also includes the voices of Jackie Vernon (as Frosty) and Billy De Wolfe (as Professor Hinkle). (Rebroadcast)

The magic still in his old silk hat, the holiday season’s perennially popular original dancing snowman continues his adventure and skates on the edge of danger. Jonathan Winters is the narrator with John Goodman as the voice of Frosty. (Rebroadcast)

In the second of two 30-minute specials, Robbie battles Blitzen (voiced by Hugh Grant) in an effort to stop his nemesis’s launch of a reindeer theme park. Britney Spears, James Woods, Leah Remini and Jerry Stiller are among the additional stars to lend their voices. (Rebroadcast)