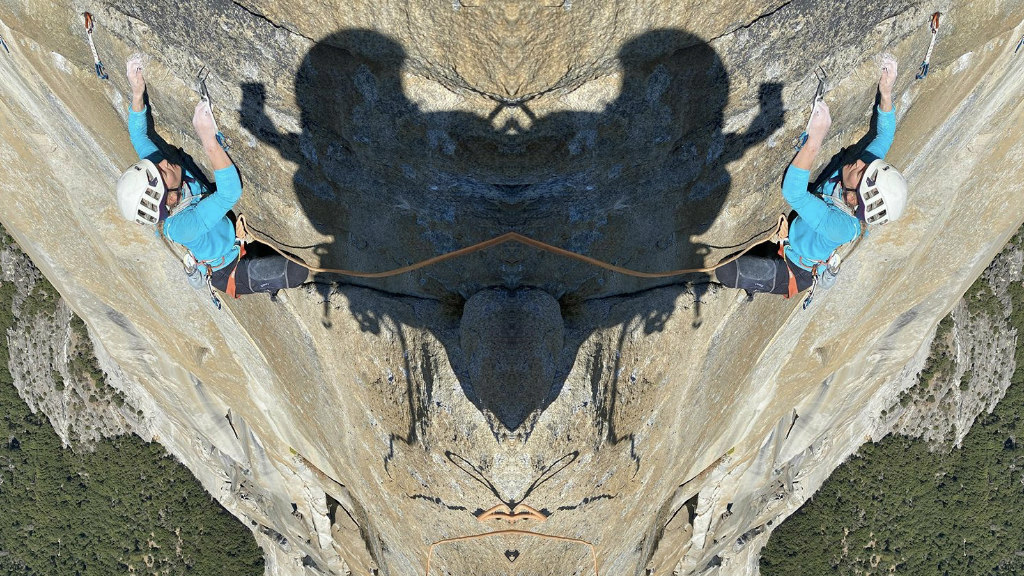 Pro rock climber Emily Harrington has become the fourth woman to free-climb and conquer El Capitan in one day and the first woman to send it via the Golden Gate route. Next to Fontainebleau, France, known for bouldering, El Capitan is one of the world’s most famous climbing spots… and is even considered to be the birthplace of modern rock climbing.

Many publications reported that Harrington was the first woman to free-climb El Capitan. However, on Instagram, she wrote:
"* to clarify in case anyone saw that some media got some of their facts wrong (to be corrected soon hopefully), I am the 4th woman to free climb El Cap in a day via any route behind 3 remarkable women: Lynn (via the Nose), @highsteph (via FreeRider) & @mayanclimbs (via FreeRider)."

The latest El Cap record makes Harrington the fourth person to top out on the Golden Gate route on Yosemite National Park’s 3,000-foot (914-meter) wall in less than 24-hours. Free climbers use ropes to catch them if they fall, but not to help them ascend.

Starting out at about 1:30AM, it took Harrington just 21 hours, 13 minutes and 51 seconds to send it. Her boyfriend Adrian Ballinger, a Mount Everest guide, and Alex Honnold guided Harrington's climb. They were tied to the same rope.

“I never believed I could actually free climb El Cap in a day when I first set the goal for myself. It didn’t seem like a realistic objective for me. I didn’t have the skills, fitness, or risk profile to move so quickly over such a large piece of stone. But I chose it exactly for that reason,” Harrington wrote on Instagram.

Who has done it before?

A few dozen men have free-climbed El Capitan, but only three have reached the top of the Golden Gate route: Tommy Caldwell, Alex Honnold and the late Brad Gobright.

As for women climbers, El Capitan was first free-climbed in a day in 1994 by Lynn Hill. Steph Davis and Mayan Smith-Gobat also free-climbed El Capitan in a day, in 2004 and 2011, respectively.

On January 14, 2015, Tommy Caldwell and Kevin Jorgeson completed the first free climb of the Dawn Wall after 19 days.

On June 3, 2017, Alex Honnold completed the first free solo climb of El Capitan. He ascended the Freerider line in 3 hours and 56 minutes, beginning at 5:32 am PDT and reaching the peak at 9:28 am PDT. The 18hr climb was filmed for the 2018 documentary Free Solo, which won an Academy Award.

Harrington added on IG, "It’s pretty hard to talk about free climbing on El Capitan without mentioning perhaps THE most astonishing ascents of all time – Lynn Hill’s (@_linacolina_) one day free ascent of The Nose in 1994. Her ascent made her the very first human to achieve such a feat, and it was far and beyond what anyone could conceive of at the time. Still today, free climbing El Capitan in a single day (via any route) is a pretty rare occurance (~25 people have achieved this maybe). More impressive, a free ascent of the Nose over the course of many days is considered exceptional and still only a handful of the very best climbers in the world have succeeded (under 10). How’s that for being ahead of one’s time?

Having the privilege to grow up in the climbing mecca of Boulder, CO I was lucky enough to get to know Lynn from the beginning of my climbing career. Women like Lynn, @robyn_erbesfield_raboutou, @bethrodden, @katiebrownclimbs, @bobbibensman etc were fixtures in the climbing community at the time. As a little girl I was introduced to climbing knowing that it was a space for women and that we had the potential to excel just as much as men did."