The 2019 Songwriters Hall of Fame 50th Annual Induction and Awards Dinner was a sparkling success, as SHOF Chairman Nile Rodgers, President/CEO Linda Moran and co-chairs, Mike O’Neill and Paul Williams recognized and celebrated some of the best songwriting legends of our time. 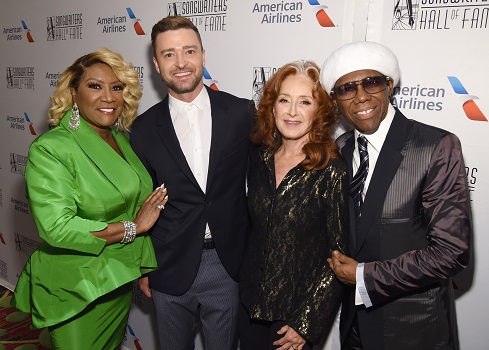 The Songwriters Hall of Fame Induction and Awards Dinner, year after year, is a night full of unforgettable moments celebrating the art of songwriting. The evening kicked off with a DJ set by Jermaine Dupri who brought the crowd to their feet with hits including three TLC classics: “Creep,” “What About Your Friend” and “Ain’t 2 Proud 2 Beg,” as well as Blu Cantrell’s “Hit ‘Em Up Style (Oops!),” Monica’s “Like This And Like That,” Madonna’s “Secret,” and Boyz II Men’s “Motownphilly.” Dupri’s performance led to thunderous applause before he inducted Dallas Austin.

Songwriter and producer, Benny Blanco took to the stage to honor close friend, singer/songwriter Halsey with the Hal David Starlight Award, which is presented to young songwriters who are making a significant impact in the music industry with their original songs. Benny Blanco stated, “[Halsey] is a superhuman in everything she does.”  After receiving her award, Halsey beautifully performed an acoustic rendition of “Without Me” accompanied by guitarist Arianna Powell.

The evening continued as Bonnie Raitt took to the stage to induct John Prine. Following his induction, Bonnie joined him for a special performance of their song “Angel From Montgomery.” During Prine’s acceptance speech he stated, “There is no better feeling in the world than having a killer song in your pocket.” He later performed a solo acoustic version of “Hello In There.”

Queen Latifah had the honor of introducing inductee and longtime friend, Missy Elliott when the room was surprised with a video message from former First Lady Michelle Obama who stated, “Missy shows us that your voice is more than just the words you say, it’s about where they come from – it’s about owning your truth.” Following the video message, Lizzo performed an electrifying rendition of “Sock It To Me” with a surprise appearance by Da Brat.

Clive Davis awarded Carol Bayer Sager with the highest honor bestowed by Songwriters Hall Of Fame, the Johnny Mercer Award. Carol Bayer Sager went on to perform a stunning rendition of the iconic hit “That’s What Friends Are For,” with guest appearances by Patti LaBelle, Jonas Myrin, Desmond Child and Jordan Smith.

The celebratory evening concluded when renowned producer Timbaland presented Justin Timberlake the Contemporary Icon Award. During his acceptance, Justin stated, “There is no feeling like finishing a song, the only thing that can measure up is when you hear someone sing it back to you.”  Justin went on to perform a medley of a number of his greatest hits including, “My Love,” “Cry Me A River,” “Say Something,” “What Goes Around,” “Mirrors,” and “Can’t Stop The Feeling.” The audience jumped out of their seats, dancing and singing along throughout his entire performance. Before ending the night, Timbaland rejoined Justin on the stage for a spectacularly memorable performance of their smash single “SexyBack.”