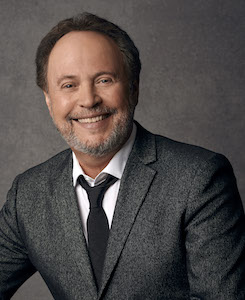 Turner Classic Movies (TCM) today announced it will honor iconic comedian, actor and author Billy Crystal with a hand and footprint ceremony at the world-famous TCL Chinese Theater IMAX® in Hollywood during the tenth annual TCM Classic Film Festival onFriday, April 12. Crystal, a Tony Award® and six time Emmy® winner and Golden Globe® nominee, has had a remarkable career from starring in cinematic classics such as The Princess Bride (1987), When Harry Met Sally… (1989), City Slickers (1991) in addition to hosting the Academy Awards nine times.

“Billy Crystal has long been among the most versatile talents working in Hollywood. And I say 'talent' because Billy is so much more than an actor. Trying to define his career into a signature role or moment feels futile. Is it his lead performance in When Harry Met Sally, the ensemble he led in City Slickers, or his scene-stealing supporting part as Miracle Max in The Princess Bride? Then again, it might be his prodigious resume of voice acting work or his consistently impressive work hosting the Academy Awards, which he’s done nine times (only Bob Hope has done it more). From Soap to Monsters, Inc. Crystal has emerged as one of the great story tellers of his generation – on the big screen, the small screen, and in front of a live audience,” said Ben Mankiewicz, TCM primetime anchor and official host of the TCM Classic Film Festival. “For these and a fifty other reasons, we’re thrilled to be able to honor Billy for his contributions to this industry with a hand and footprint ceremony outside the TCL Chinese Theater."

This marks the ninth consecutive year TCM has featured a hand and footprint ceremony at the legendary TCL Chinese Theatre IMAX®. In 2011, Peter O'Toole was the honoree, followed by Kim Novak in 2012, Jane Fonda in 2013, Jerry Lewis in 2014, Christopher Plummer in 2015, Francis Ford Coppola in 2016, Carl and Rob Reiner in 2017 and Cicely Tyson in 2018.

Music
Broadway In Hollywood Is Coming To The Pantages & Dolby

L. A. Glam
Voting Is Now Open For The 2019 Hollywood Beauty Awards