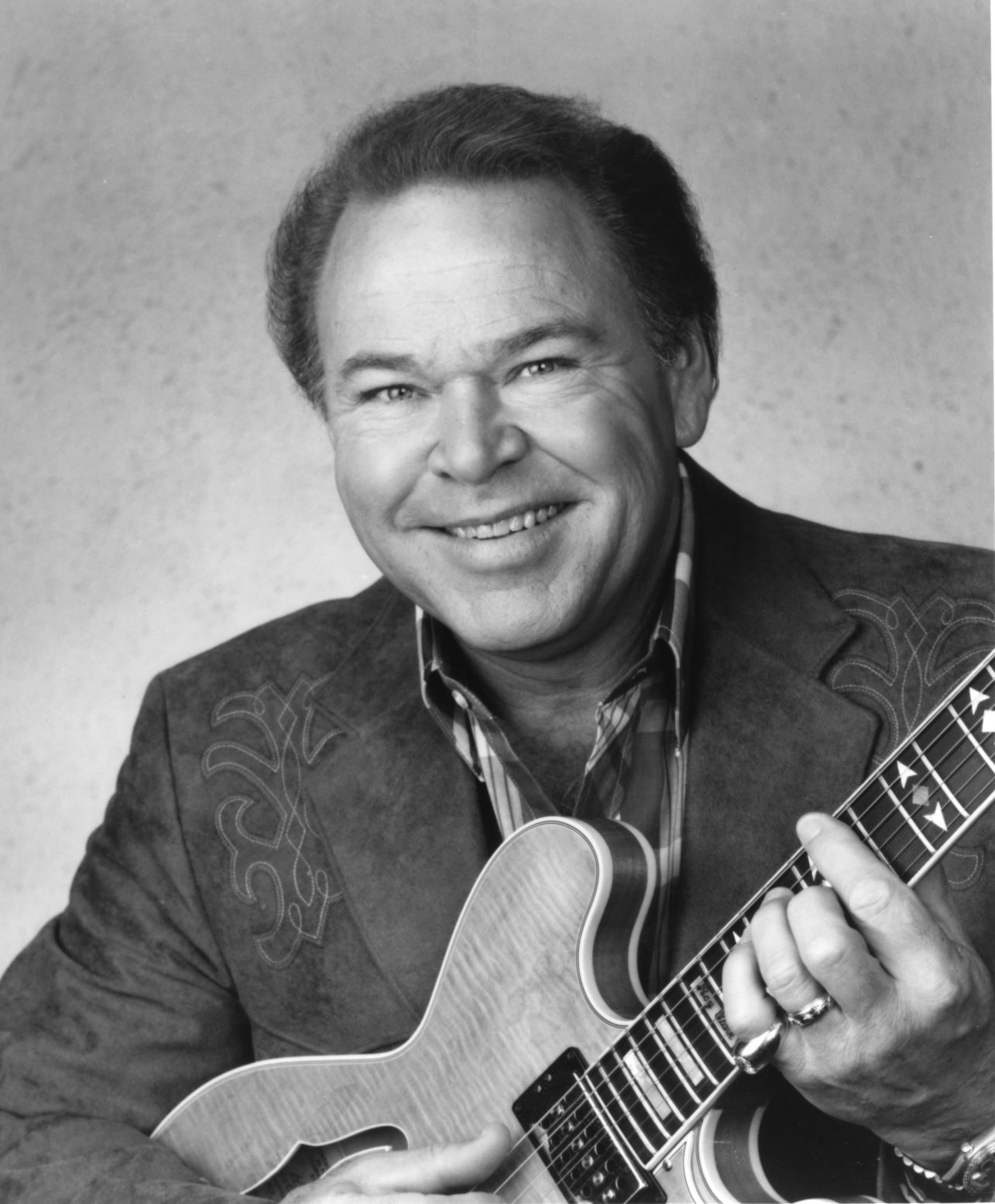 Roy Clark, the legendary 'superpicker', GRAMMY, CMA and ACM award winner, Country Music Hall of Fame and Grand Ole Opry member and co-host of the famed 'Hee Haw' television series, died today at the age of 85 due to complications from pneumonia at home in Tulsa, Okla.

Roy Clark’s decade-defying success could be summed up in one word — sincerity. Sure, he was one of the world’s finest multi-instrumentalists, and one of the first cross-over artists to land singles on both the pop and country charts. He was the pioneer who turned Branson, Mo., into the live music capitol of the world (the Ozark town today boasts more seats than Broadway). And his talents turned Hee Haw into the longest-running syndicated show in television history.

“Roy Clark made best use of his incredible talent. He was both a showman and a virtuoso, with a love of music that beamed across air waves and into millions of living rooms, where families gathered to watch and listen, " said Kyle Young, CEO, Country Music Hall of Fame and Museum.

But the bottom line for Roy Clark was the honest warmth he gave to his audiences. Bob Hope summed it up when he told Roy, “Your face is like a fireplace.”

“A TV camera goes right through your soul,” says the man who starred on Hee Haw for 24 years and was a frequent guest host for Johnny Carson on The Tonight Show. “If you’re a bad person, people pick that up. I’m a firm believer in smiles. I used to believe that everything had to be a belly laugh. But I’ve come to realize that a real sincere smile is mighty powerful.”

For a man who didn’t taste major success until he was 30, the key was not some grand plan but rather taking everything in its own time. “Sure,” he said, “I had dreams of being a star when I was 18. I could’ve pushed it too, but it wouldn’t have happened any sooner. I’m lucky. What’s happened has happened in spite of me.”

In fact, that’s what Clark titled his autobiography, My Life — In Spite of Myself!with Marc Elliot (Simon & Shuster, 1994). The book reminded many that there is much more to Roy Clark than fast fingers and a quick wit.

That he was raised in Washington, D.C., often surprises people. Born Roy Linwood Clark on April 15, 1933 in Meherrin, Virginia, his family moved to D.C. when he was a youngster. His father played in a square dance band and took him to free concerts by the National Symphony and by various military bands. "I was subjected to different kinds of music before I ever played. Dad said, 'Never turn your ear off to music until your heart hears it--because then you might hear something you like.'"

Beginning on banjo and mandolin, he was one of those people "born with the music already in them." His first guitar, a Sears Silvertone, came as a Christmas present when he was 14. That same year, 1947, he made his first TV appearance. He was 15 when he earned $2 for his first paid performance, with his dad's band. In the fertile, diverse musical soil of cosmopolitan D.C., he began playing bars and dives on Friday and Saturday nights until he was playing every night and skipping school--eventually dropping out at 15. "Music was my salvation, the thing I loved most and did best. Whatever was fun, I'd go do that."

The guitar wizard soon went on tour with country legends such as Hank Williams and Grandpa Jones. After winning a national banjo competition in 1950, he was invited to perform at the Grand Ole Opry, which led to shows with Red Foley and Ernest Tubb. Yet he'd always return to D.C. to play not only country but jazz, pop, and early rock'n'roll (he's prominently featured in the recent book Capitol Rock); to play with black groups and white groups; to play fast, to even play guitar with his feet. In 1954, he joined Jimmy Dean and the Texas Wildcats, appearing in clubs and on radio and TV, and even backing up Elvis Presley.

But in 1960, he was 27 and still scrambling. An invitation to open for Wanda Jackson at the Golden Nugget in Las Vegas proved to be his big break. It led to his own tour, on the road for 345 straight nights at one stretch, and when he returned to Vegas in 1962, he came back as a headliner and recording star, with his debut album The Lightning Fingers Of Roy Clark. The next year, he had his first hit, The Tips Of My Fingers, a country song that featured an orchestra and string section. "We didn't call it crossover then but I guess that's what it was," he says. "We didn't aim for that, because if you aim for both sides you miss them both. But we just wanted to be believable."

He was--on record and on TV, where his first appearances in 1963 on 'The Tonight Show' and 'American Bandstand' showcased his easygoing attitude and rural sense of humor. "Humor is a blessing to me. My earliest recollections are of looking at something and seeing the lighter side. But it's always spontaneous. I couldn't write a comedy skit for someone else."

Throughout the '60s, Clark recorded several albums, toured constantly, and appeared on TV variety shows from Carson to Mike Douglas to Flip Wilson. "I was the token bumpkin. It became, 'Let's get that Clark guy. He's easy to get along with.'" Then came 'Hee Haw.' A countrified 'Laugh-In' with music, shot in Nashville, 'Hee Haw' premiered in 1969. Co-starring Clark and Buck Owens, it was an immediate hit. Though CBS canceled the show after two-and-a-half years, despite ranking in the Top 20, the series segued into syndication, where it remained until 1992. "I long ago realized it was not a figure of speech when people come up to me and say they grew up watching me since they were 'that big'."

A consummate musician, no matter the genre, he co-starred with Petula Clark at Caesar's Palace, became the first country artist to headline at the Montreux International Jazz Festival and appeared in London on 'The Tom Jones Show.' Clark was amazed when guitarists from England credited his BBC specials and performances on variety TV shows with the likes of the Jackson 5 for inspiring them to play. But the highlight of his career, he said, was a pioneering, sold-out 1976 tour of the then-Soviet Union. "Even though they didn't know the words, there were tears in their eyes when I played Yesterday. Folks there said we wouldn't realize in our lifetime the good we'd accomplished, just because of our pickin' around."

When he returned in 1988 to now-Russia, Clark was hailed as a hero. Though he'd never bought a joke and doesn't read music, the self-described, and proud of it, "hillbilly singer" was that rare entertainer with popularity worthy of a star on the Hollywood Walk of Fame and respect worthy of the Academy of Country Music's Pioneer Award and membership in the Gibson (Guitar) Hall of Fame; an entertainer who could star in Las Vegas (the first country artist inducted into its Entertainers Hall of Fame), in Nashville (becoming the 63rd member of the Grand Ole Opry in 1987), and at Carnegie Hall. Roy was inducted into the Country Music Hall of Fame in 2009.

Roy’s many good deeds on behalf of his fellow man led to him receiving the 1999 Minnie Pearl Humanitarian of the Year Award from TNN’s Music City News Awards. In October, 2000, he was inducted into the Oklahoma Music Hall of Fame, and he was actively involved with school children who attend the Roy Clark Elementary School in Tulsa, Okla.

From his home in Tulsa, where he moved in 1974 with Barbara, his wife of 61 years, Clark continued to tour extensively. For him — and for his legion of loyal fans — live performance was what it was all about. “Soon as you hit the edge of the stage and see people smiling and know they’re there to hear you, it’s time to have fun. I keep a band of great young people around me, and we’re not musically restrained. It’s not about ‘let’s do it correct’ but ‘let’s do it right.’”

At the end of each of Roy’s concerts, he would tell the audience, “We had to come, but you had a choice. Thanks for being here.” With responding smiles, audiences continued to thank Roy for being there, too.

Roy is preceded in death by his beloved grandson Elijah Clark who passed at the age of fourteen on September 24, 2018. Roy is survived by Barbara, his wife of sixty-one years, his sons Roy Clark II and wife Karen, Dr. Michael Meyer and wife Robin, Terry Lee Meyer, Susan Mosier and Diane Stewart, and his grandchildren: Brittany Meyer, Michael Meyer, Caleb Clark, Josiah Clark and his sister, Susan Coryell.

A memorial celebration will be held in the coming days in Tulsa, Okla., details forthcoming.