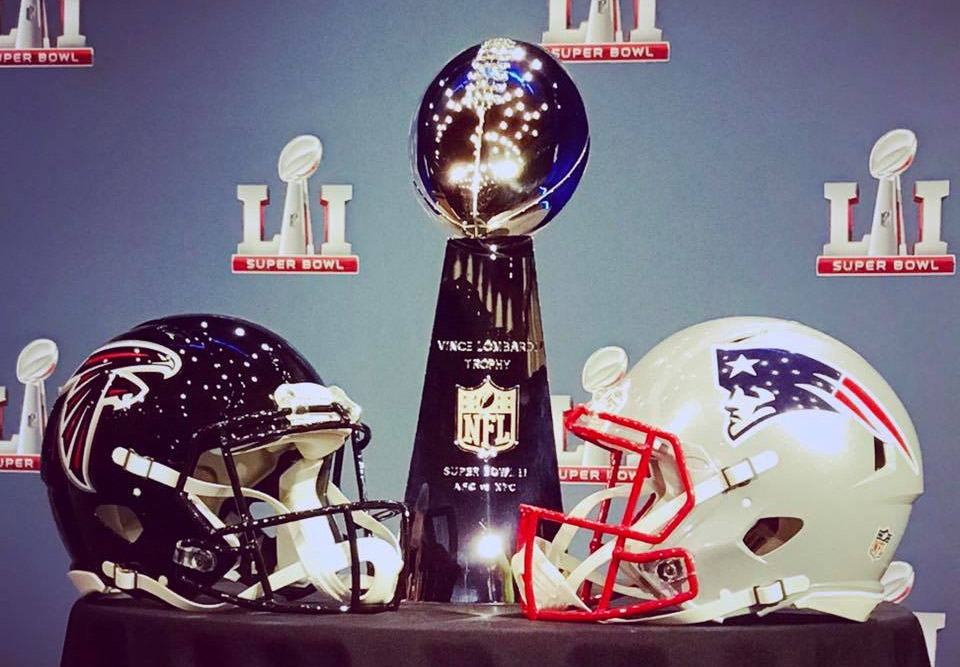 Super Bowl LI takes place on Sunday February 5, 2017, in Houston, TX at the NRG Stadium and features the New England Patriots vs. the Atlanta Falcons. The NFC Champion Falcons enter the big dance with the NFL's highest-scoring offense at 33.8 points per game.

Atlanta's other acheivements include offensive coordinator Kyle Shanahan being named assistant coach of the year and quarterback Matt Ryan as offensive player of the year. The MVP award is handed out Saturday night, and Ryan is expected to win that award, as well. And although the AFC Champion Patriots hold the best regular season record at 14-2, and ended the season with a 7-game winning-streak, the 11-5 Falcons are still a formidable force to be reckoned with.

Bill Belichick, along with future Hall-Of-Famer Tom Brady and the Patriots, surely have the advantage with Super Bowls, making their 6th appearance, while the Falcons are just making their second appearance in team history. What this game will come down to is whose defense plays the best and keeps the oppositions's offense on the sidelines. If Atlanta is allowed to dominate ball-possession, I give them the advantage with their explosive offense.

Both teams are equally motivated, but Atlanta is obviously the hungrier team based on the fact that the franchises' only other appearance was 18-years ago, resulting in a 34-19 loss to the Denver Broncos. Certainly turnovers will be a key for both teams, because the team who protects the ball best, will increase their chances to win.

Believe In Bill; Patriot's Coach Knows How To Slow Down Falcons

With a win over the Atlanta Falcons on Sunday, the New England Patriots will enter unprecedented territory. Bill Belichick and Tom Brady will break a tie with Chuck Knoll and Terry Bradshaw for most Super Bowl wins for a player-coach combination (five), and Brady will have the most Super Bowl wins for any quarterback, pushing his argument for the greatest of all time.

Standing in their way is the high-octane offense of the Atlanta Falcons. Led by all-pro first-teamers Matt Ryan and Julio Jones, the Falcons had the highest scoring offense in football during the regular season, and outscored the Green Bay Packers and Seattle Seahawks 80-41 to reach the Super Bowl. In order to beat Atlanta, New England must slow the game down. Luckily, that’s nothing new for Belichick on the biggest stage.

While defensive coordinator of the New York Giants in 1991, Belichick conceived a game plan to combat the Buffalo Bills’ equally impressive offense. To do so, he willingly conceded 100 rushing yards to Bills running back Thurman Thomas, in order to take Buffalo out of their vaulted passing game. Similarly, Belichick stifled the St. Louis Rams “greatest show on turf” by defending without a pattern, to keep Kurt Warner and Marshall Faulk guessing.

His teams won both games by using unorthodox schemes which took his opponents away from their first options. To stop Atlanta, that starts with containing Jones. What will Belichick do? Your guess is as good as mine, or Dan Quinn's, but the Patriots coaching staff will certainly devise a masterful game plan Atlanta has not seen. That much is guaranteed.

Sports
For DeAndre Jordan, Paul's Injury Might Be Blessing In Disguise