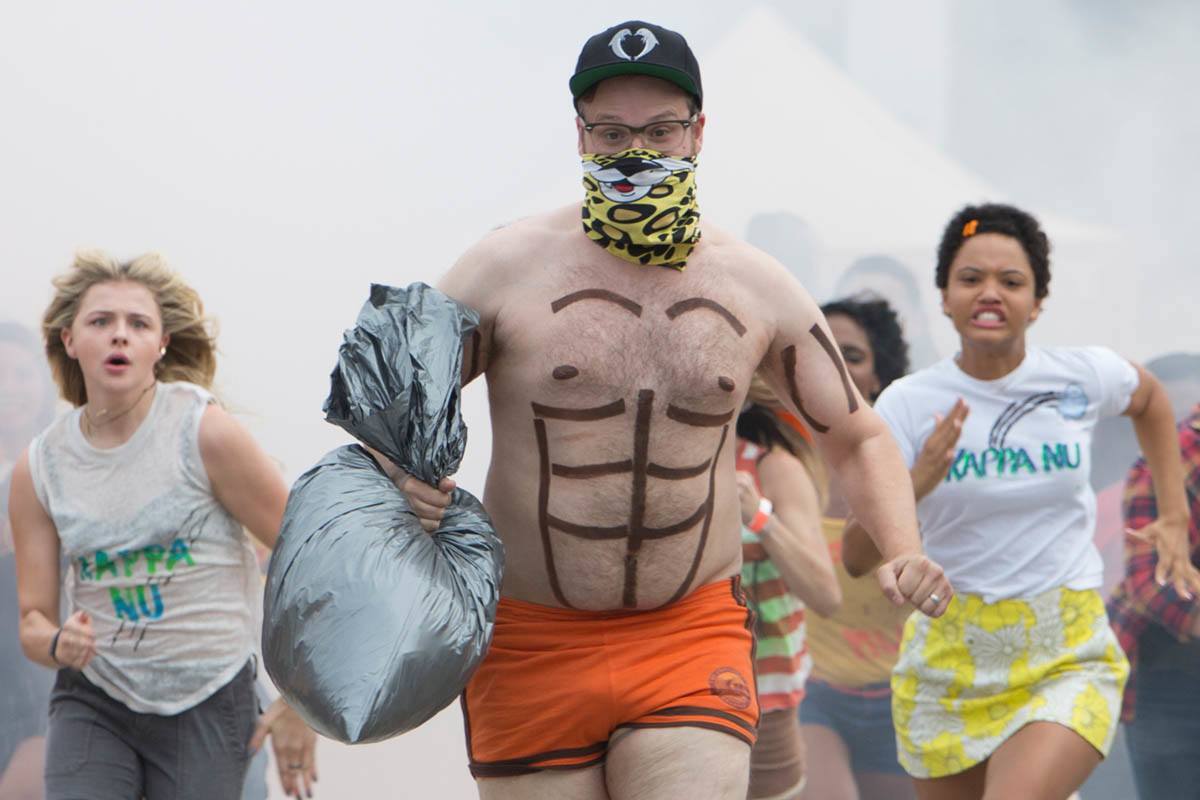 Well played Mr. Rogen. In creating a sequel to the over-the-top frat boy fiesta “Neighbors,” you and your filmmaker cohorts have managed to concoct quite possibly the most socially aware bro-comedy ever.  Enter “Neighbors 2: Sorority Rising,” a summertime popcorn party pic that doubles as a think-piece on America’s shady college sex culture.

But before divulging too much, let’s get everyone up to speed on the storyline. When the audience is reintroduced to affable parents Mac (Seth Rogen) and Kelly (Rose Byrne), they are on the verge of selling that same house that caused such a hullabaloo in the first picture.  The main reason for the move is the fact that Kelly is pregnant again and with a baby already out and about and another on the way, it’s time for the family to head to the ‘burbs.

Mac and Kelly are all but moved out of their house until a hard partying post-feminism sorority led by Shelby (Chloe Grace Moretz) decides to move in. This is a bit problematic for the new parents because the new buyers can pull out of closing the deal at any time. And just like that, both Mac and Kelly are forced back into their University days, this time battling it out against female co-eds.

In a way, the first “Neighbors” film was very much the anti-Frat house, Frat House movie. Similarly, #2 sees the debauchery changing genders, this time focusing on a gaggle of girls getting their turn at tearing up the suburbs. Joining Shelby in her mischief is Beth (Kiersey Clemons from 'Dope') as well as newcomer Beanie Feldstein (who just so happens to be Jonah Hill’s kid sister).

Returning director Nicholas Stollar and his menagerie of writers are painfully aware — in all the best ways — of the dark side of frat culture in 2016. Today’s young female population face a number of additional difficulties compared to the opposite sex when they transition to adulthood. It’s a really commendable effort from the writers to address just how, for lack of a better term; 'rapey' and backwards today’s Greek System is. Despite its sequel title, there is a lot of fresh and exciting things at work that offer a constant stream of laughs throughout.

Because director Nicholas Stoller is once again the maestro, he hilariously revisits the boys from the first film, particularly Zac Efron’s Teddy and Dave Franco’s Pete. Pete gets an entire side-plot regarding his gay engagement plans. The chemistry built with this group is not lost, and it’s easy to get stuck wanting to watch the remaining “brothers” balk every stereotype that they developed in the first film. These characters are only an aside however, as Teddy’s stunted adulthood is the genesis to plenty of sorority shenanigans.

While there is a lot to cheer about, at times the writing does feel as if it is trying just a little bit too hard to differentiate itself from other genre entries. It is amazing to finally elevate women from their gyrating, sloppy, alacritous portrayals in the “Animal House” style films of the ‘80s, but it’s still problematic that sex toy gags supersede character development.

An overall positive for the film, however, is the stellar acting. The three sorority ringleaders are fantastic. Moretz is especially enjoyable to watch as the pot-smoking high school loser looking to reinvent herself in college. Rose Byrne is also terrific as the glue that holds all the depravity together. Seth Rogen is always fun to watch as the bong-hitting manchild character he has cultivated over the past decade. Rounding out the topnotch cast is Efron, who hits every mark as the idiot savant with six-pack abs.

While it is no laughing matter that America truly does have a major problem lurking within their higher education institutions, “Neighbors 2: Sorority Rising” does an excellent job addressing these issues with hysterical results.