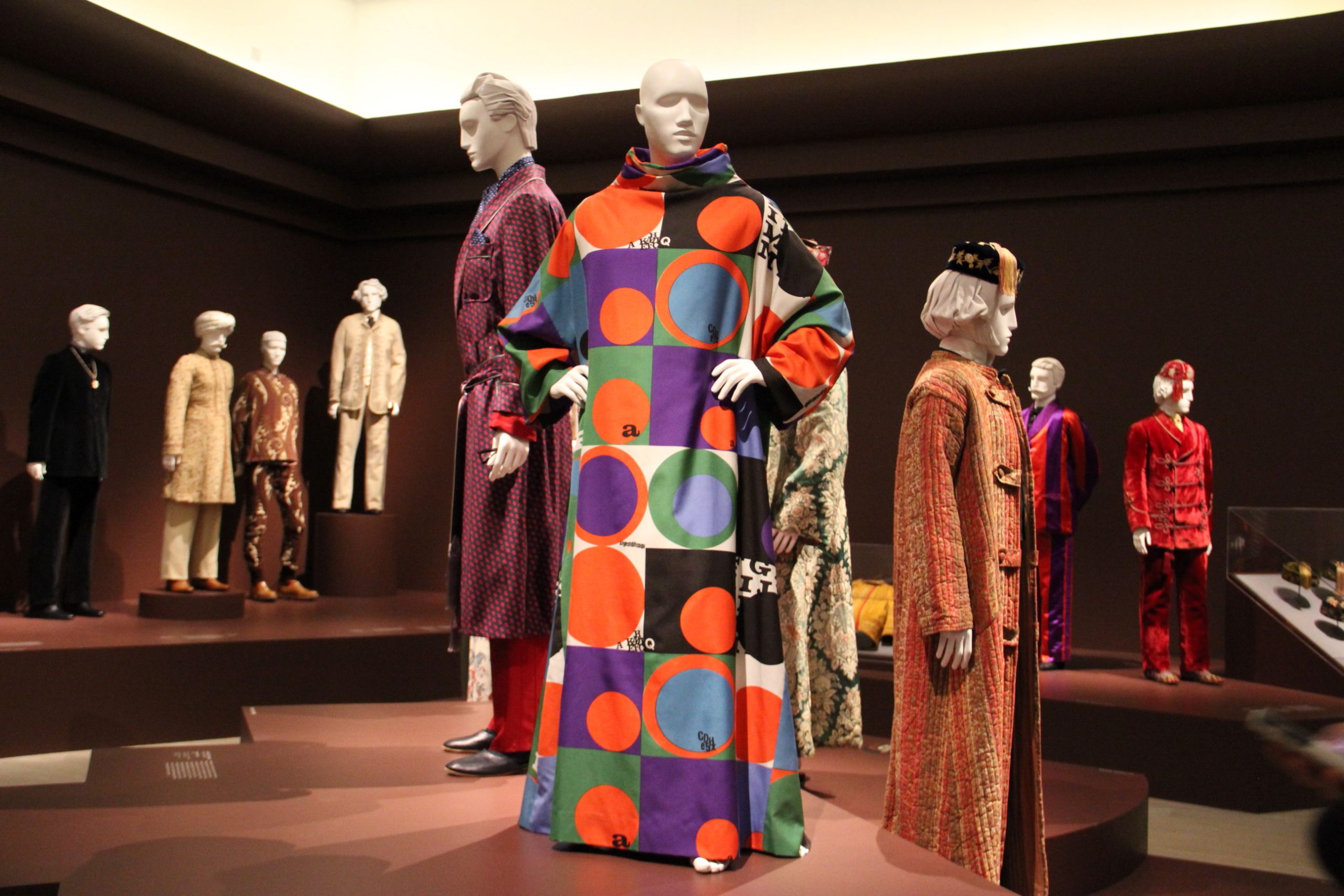 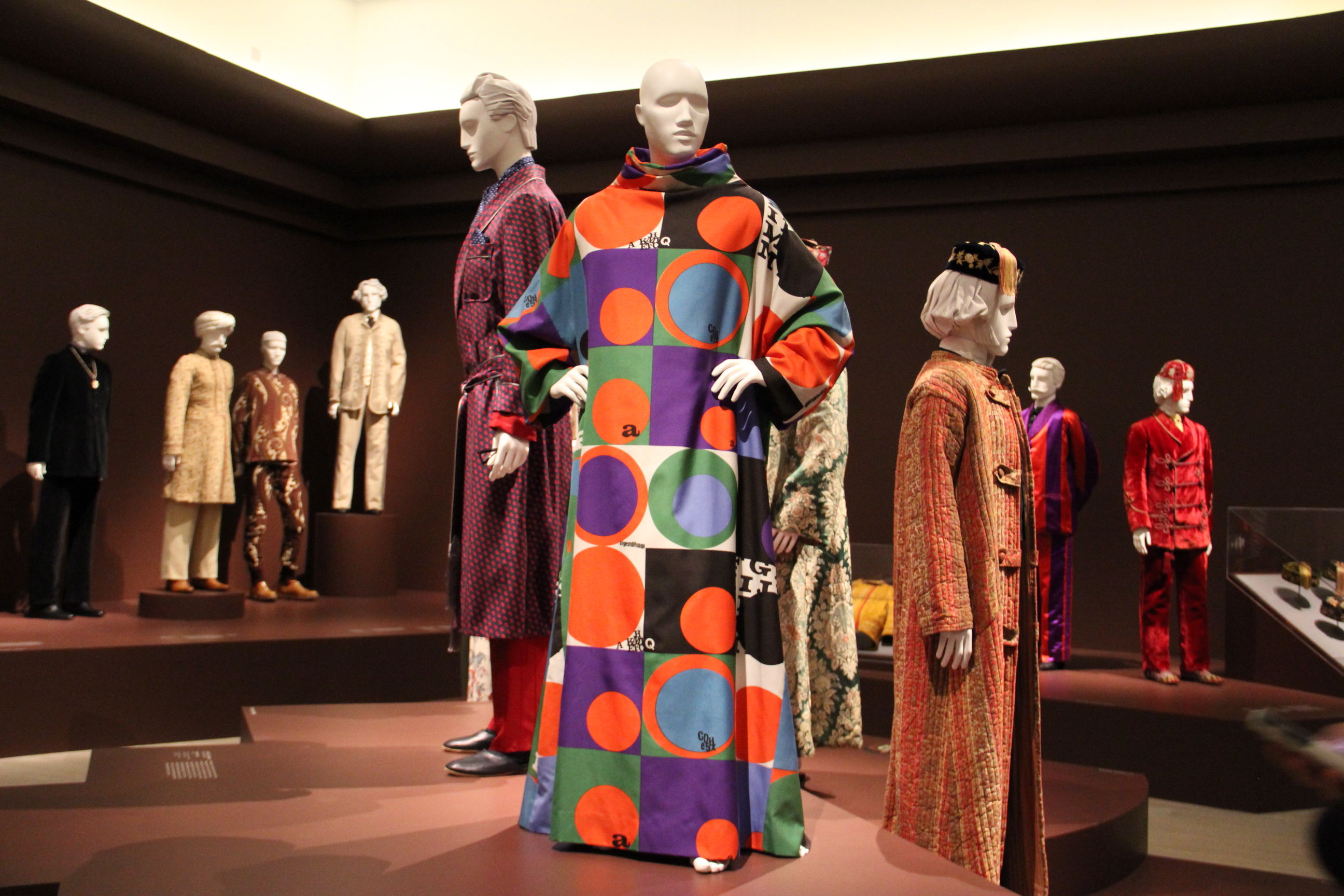 LATF got a first look at The Los Angeles County Museum of Art's (LACMA) latest exhibit, Reigning Men: Fashion in Menswear, 1715–2015, a major survey exploring the history of men's fashionable dress from the 18th to the early 21st century. The exhibit will run from April 10–August 21, 2016. http://www.lacma.org

Curated by Sharon S. Takeda, Kaye D. Spilker, and Clarissa M. Esguerra from LACMA's Costume and Textiles department, the presentation is not in the usual chronological order. Instead, the fashion is arranged according to one century's influence on another; showcasing designers from Pierre Cardin to Walter Van Beirendonck, Yves Saint Laurent, Phillip Lim, Rudi Gernreich, today's popular designer Jeremy Scott and many more. You will see designs from the French Revolutionary period to military designs and the interactions between East and West, which greatly influenced textiles and fashion for centuries. 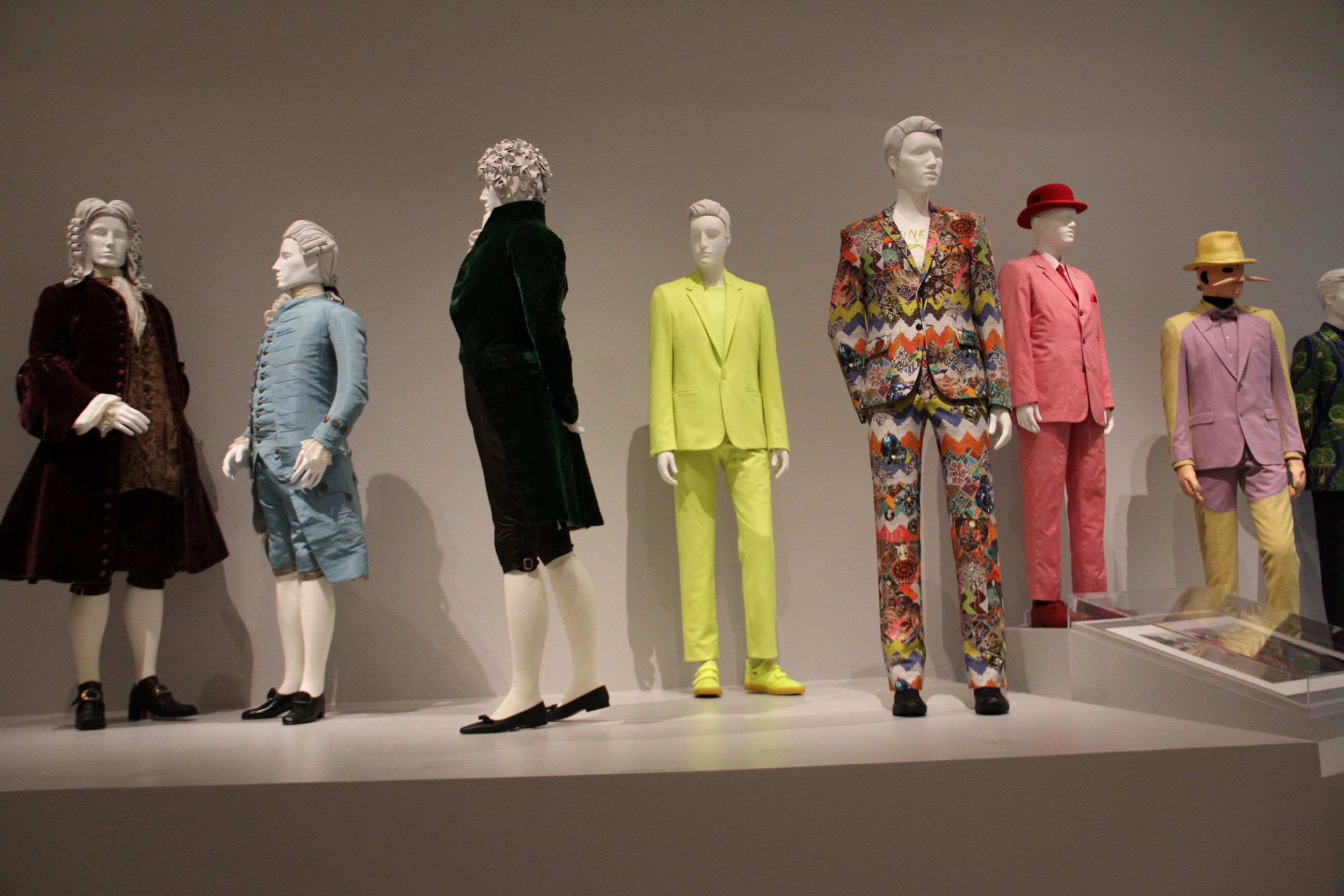 There are five thematic sections covering a 300-year survey—Revolution/Evolution, East/West, Uniformity, Body Consciousness, and The Splendid Man. The exhibit explores the connection between male and female fashion. In the 18th century, the male aristocrat wore a three-piece suit conspicuous in make and style and equally as lavish as the opulent dress of his female counterpart; the 19th-century dandy made famous a more refined brand of expensive elegance; the 20th-century mod relished in colorful and modern styles; and the 21st century man—in an ultra-chic suit by day and a flowered tuxedo by night—redefines today's concept of masculinity.

Reigning Men makes illuminating connections between history and high fashion, tracing cultural influences over the centuries, examining how elements of the uniform have profoundly shaped fashionable dress, and revealing how cinching and padding the body was, and is, not exclusive to women. The exhibition, featuring 200 looks drawn mostly from LACMA's renowned permanent collection of costume and textiles, celebrates a rich history of restraint and resplendence in menswear.

Sharon Takeda, senior curator and head of LACMA's Costume and Textiles department, said, "Reigning Men takes us on an intriguing 300-year journey of sartorial splendor of aristocrats, dandies, mods, punks, and so many others. Through examples of historical and contemporary ensembles, viewers can encounter the evolving nature of menswear and contemplate the future of men's fashion." 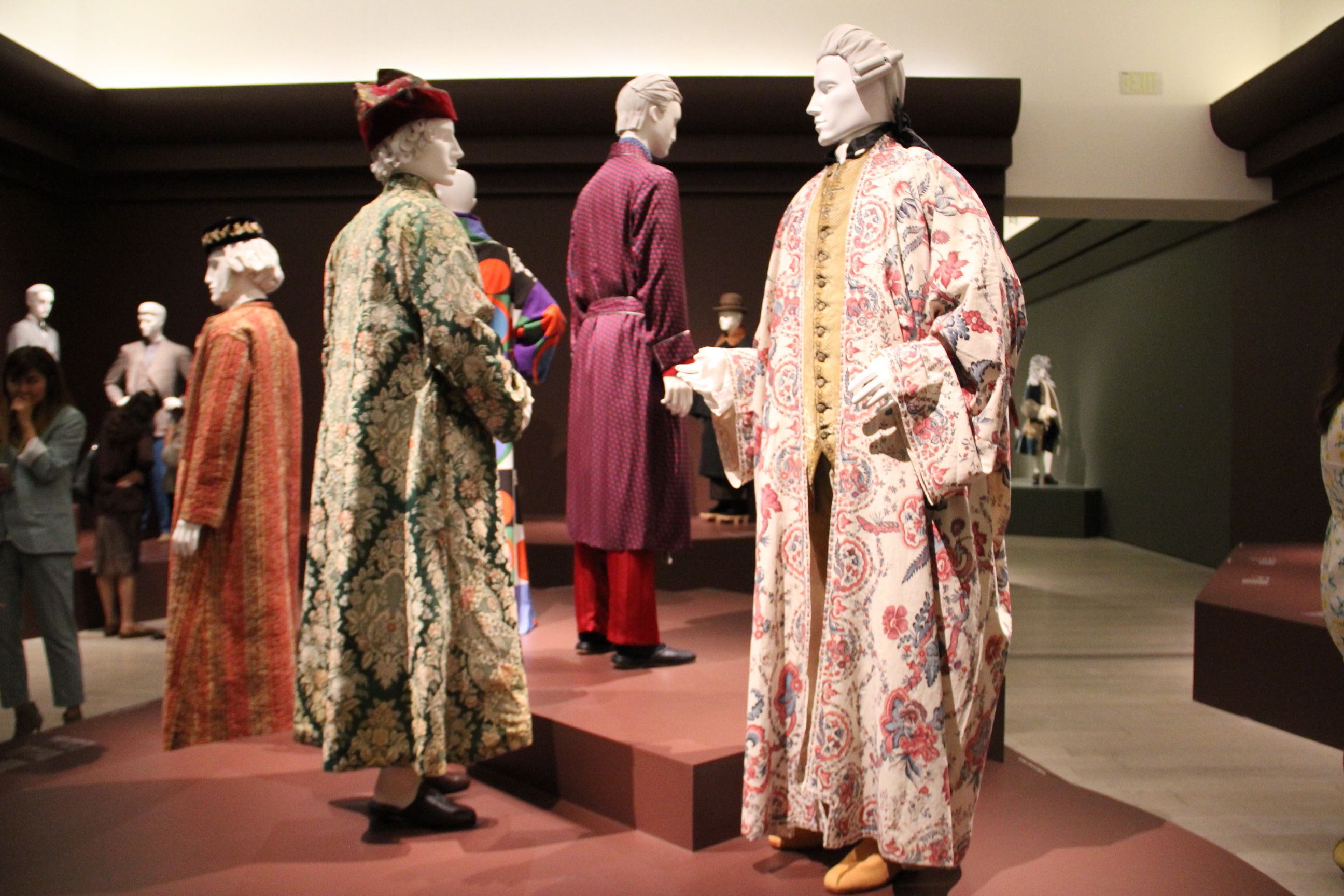 The exhibition is accompanied by a fully illustrated catalogue co-published by LACMA and Prestel/DelMonico and features essays by Tim Blanks, editor-at-large of The Business of Fashion (businessoffashion.com), and Peter McNeil, professor of design history at University of Technology Sydney, Australia, and distinguished professor at Aalto University, Finland. The exhibition installation is designed by Commune, an award-winning Los Angeles-based design group. 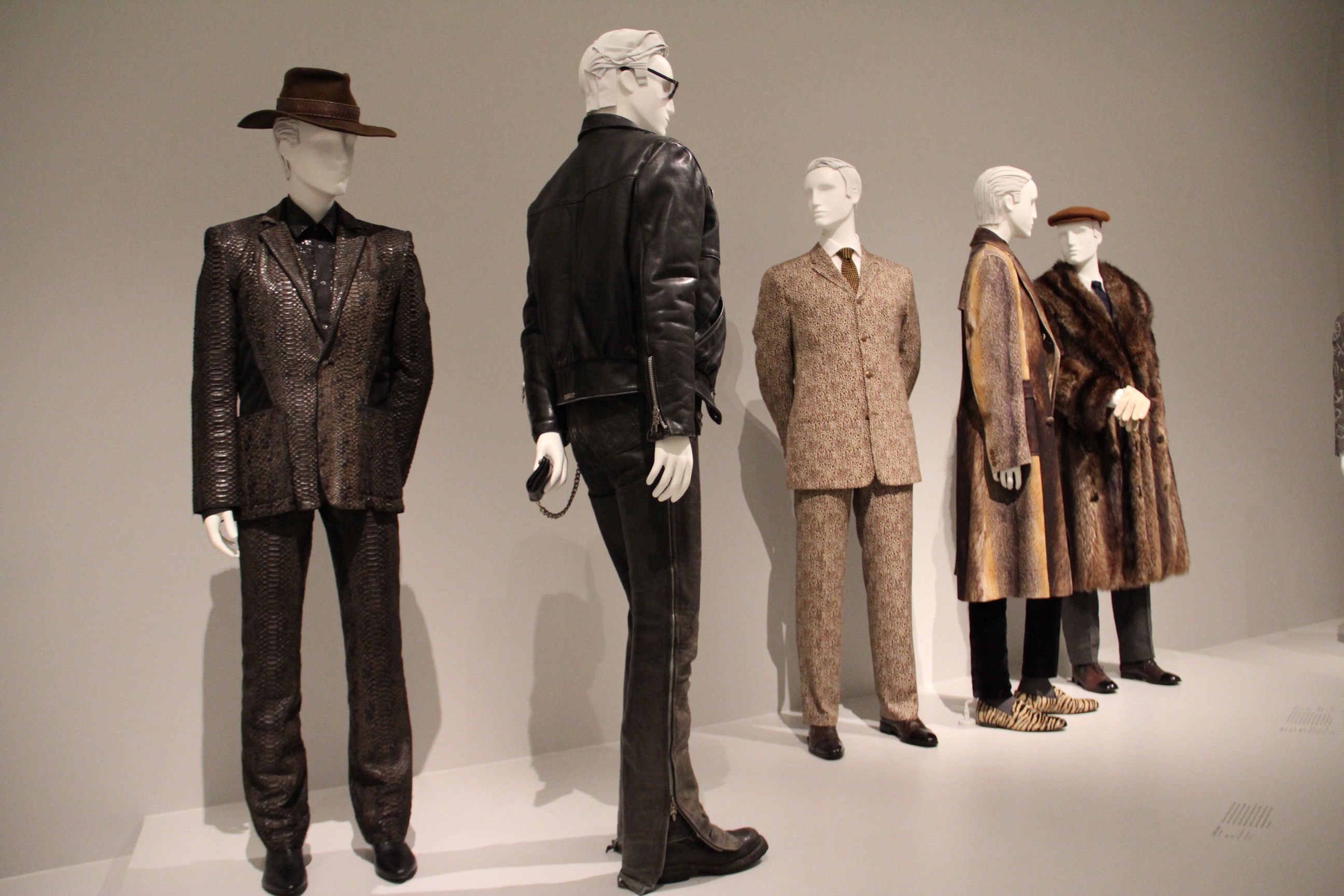 This exhibition was organized by the Los Angeles County Museum of Art and made possible by Ellen A. Michelson, sponsored by yoox.com. Additional support is provided by the Wallis Annenberg Director's Endowment Fund.  Funding is also provided by Eugene Sadovoy.