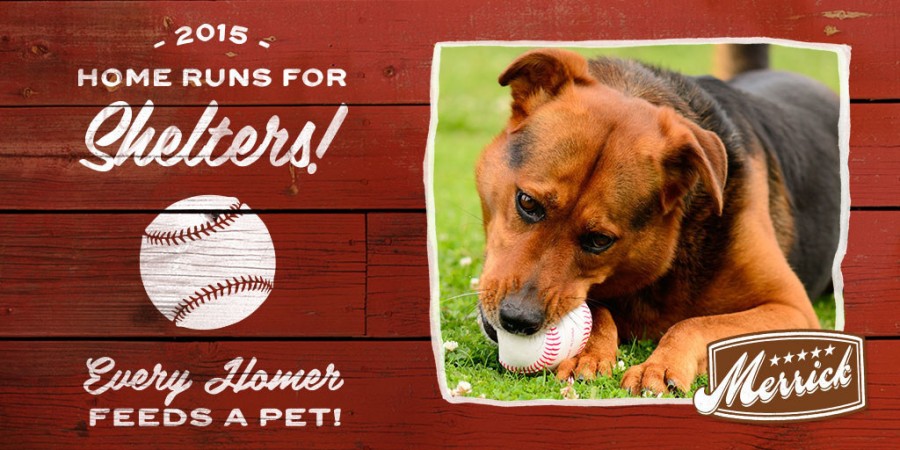 Now at the plate, local shelters! Merrick Pet Care is donating $25,000 in Merrick pet food – nearly 50,000 meals – to local pet shelters and animal rescues as part of its "Merrick's Homeruns for Shelters" campaign held this spring in conjunction with the start of baseball season.

Merrick's Homeruns for Shelters Facebook program culminates with a $1,000 donation of the company's all-natural food to a local shelter for every homerun hit by home teams during Opening Day baseball games this month.

Merrick invited its Facebook community of pet parents to nominate and vote on their favorite local shelters to receive a $1,000 food donation. During baseball home openers this April, home teams racked up 25 total homeruns for a grand total $25,000 donation.

"Every pet deserves a healthy meal especially those pets most in need awaiting their forever home," said Mark Sapir, vice president of marketing for Merrick Pet Care. "What better way to help them thrive than to knock it out of the park for them at the start of baseball season."

The 25 top shelters (based on fan votes) to receive a Merrick donation include:

"With more than 600 shelter nominations, 16,000 votes, and 25 homers leading to 25 local shelters receiving food, we're thrilled our pet parent community came out in a big way to support their local shelters," said Sapir.

FYI
Flying With Pets: What You Need To Know