Words With "Cinderella" Costume Designer Sandy Powell: It's All About The Dress(es) 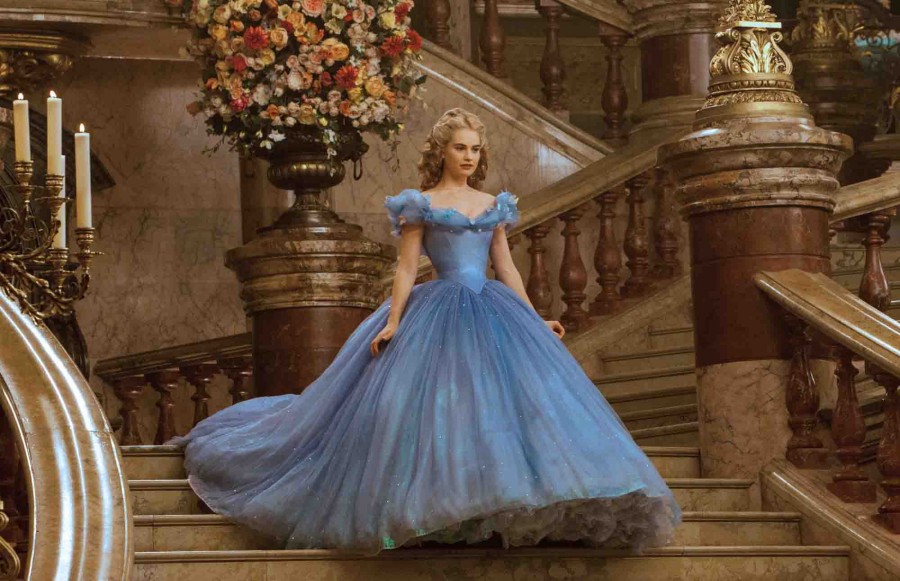 Sandy Powell is a master at her craft. The three-time Oscar winning costume designer has made visual movie memories, crafting costumes for "The Young Victoria," "Shakespeare in Love," "The Aviator" and beyond. She brings her sophistication to every silver screen design and has certainly outdone herself in Disney's revamped "Cinderella." Sandy's detail is absolutely divine; down to every piece of fabric and stitch. It is undeniable that her costumes are characters themselves. LATF spoke with the renowned designer about her fairy tale journey on "Cinderella"...

Once you signed onto Cinderella, how did you begin the process of design?

I started by looking at the original animation. I don’t really remember seeing it as a child. So that was interesting. But what I liked about it was that it looked like 1940s. Well, it was released in (1950), so the style of drawing and the animation had a lot of 1940s, 1950s about it. And I think that was in the back of my mind, obviously, when I was doing the stepmother and the stepsisters. I was given the—luckily—the choice of “Where do you want to set this?”

And I looked at lots of different periods, and landed on the nineteenth century, because it varies quite a lot from the beginning to the end. I looked at all nineteenth-century portraits—anything. Plus, fashion. I look at fashion from any period, really. There’s always something useful to look at. And then divide all that up into characters. So I have my little reference pictures of them for the stepmother, sisters, Cinderella, fairy godmother, prince, and all the men.

How many layers in the ball dress?

Not as many as you would think. The top layers, about five or six of those. And underneath that, then there’s a petticoat, and there’s only one layer of petticoat, but with lots of frills on the end of it. And then a cage ,so it was really important to keep the dress light; I mean, to look voluminous, but really, really light. It was months to make them all - it took 500 man hours per dress. And 20 people worked on it. Eight gowns were made. So imagine what they’re worth. It’s like pieces of couture—all hand-made. 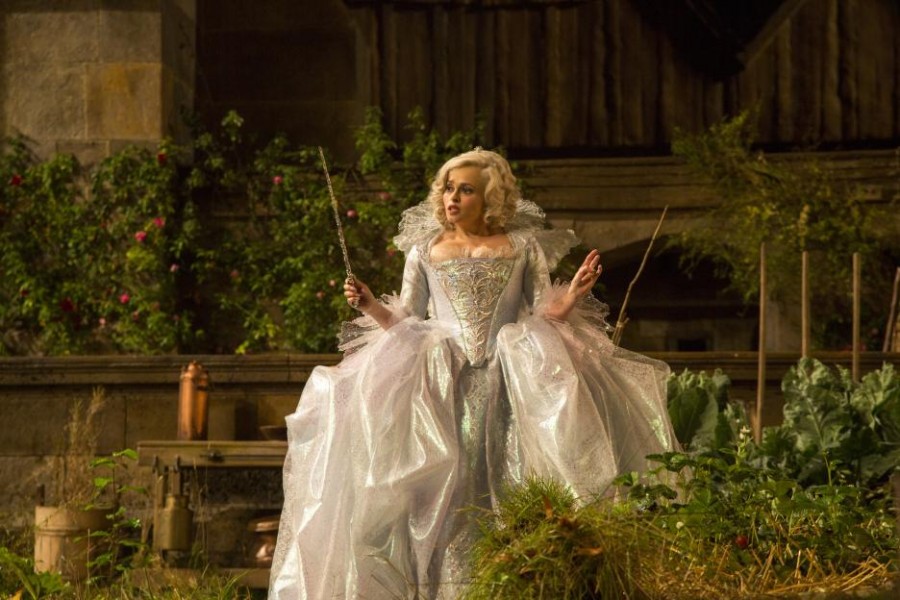 The dress stands alone, except for the butterflies...

She wears no jewelry. I think Disney did want me to do jewelry. They wanted the tiara and the necklace.. No, she’s not having any jewelry because everyone else has got jewelry on. She also didn’t have jewelry for the wedding.

The fairy godmother’s (Helena Bonham Carter) gown is stunning. I was told it was quite a light show. Did you work closely with the lighting crew?

It was. Yeah, she had like 4,000 LEDs. Tiny, tiny, tiny little things on wires—on lots of different circuits also woven into the dress. And then there’s a cage which holds the dress out, and all these wires underneath it. And then she carried a battery pack and all of those all had to then beplugged into this battery pack every night. It’s a Dutch lighting company— Philips.They usually do lighting installations for spaces, and they’ve never done a lighting installation for a person before. It was quite a challenge. And Helena (Bonham-Carter) was a trooper.

How did you design the glass slipper?

First thing I had to do was decide on a shape, and I knew I didn’t want to do a mule, which is a shoe without a back. I actually really wanted it to be an enclosed shoe so people really couldn’t get their foot into it. So then I looked at lots of different shoe shapes from all different periods, just to find the right elegant shape. The shape came from a shoe I found in a museum in Northhampton in England. It was a shoe museum. And it was from the 1890s. They let me take the shoe away; borrow it; get it scanned; a 3-D version of it made, technically drawn up—and then that was my template. Then that needed to be turned into glass. And I went through various different stages: we’ll do clear glass, we’re doing gray glass, we’ll do colored glass. I thought, it doesn’t have to be clear. And then, I think I saw a piece of crystal from a chandelier or a crystal paperweight and just saw what the light did… went it went through. It had to be crystal. 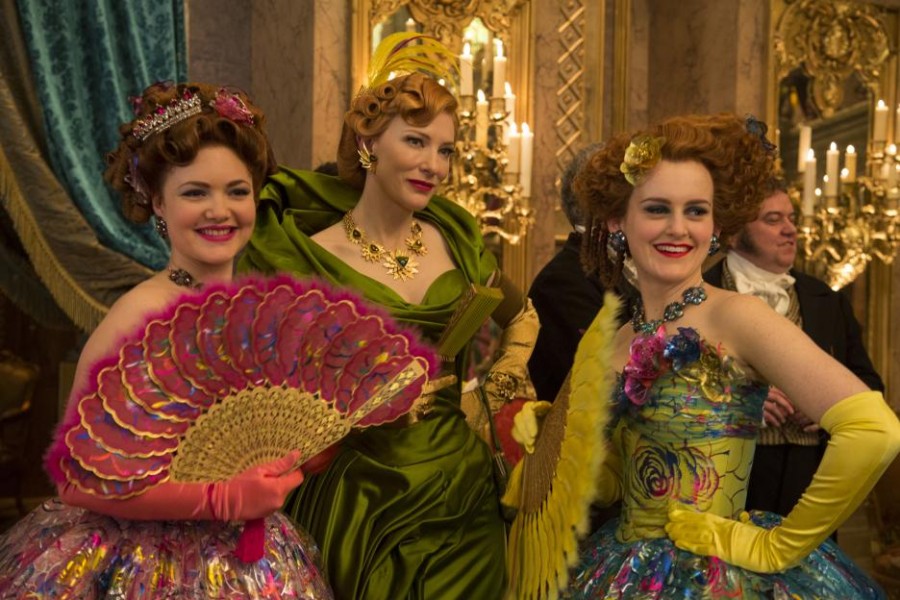 What was it like to work with Cate (Blanchett) again?

Oh, it’s great. And I worked with her straight off Cinderella on another film as well that was set in the 1950s. So it really, really helps to work with the same actor more than once, because you you’ve got a short hand and you know physically what they’re like. You know what works, what doesn’t.

Did you collaborate with the production designer, Dante (Ferretti)?

Yes, it’s very important to collaborate with the production designer and the set decorator. Especially on this; we were lucky, because we were working in a studio. We all had our work rooms in the studio, so it was really easy to go up to the art department and see what they were doing. And Francesca (Lo), the set decorator, would to me to look at the palette for all the ball gowns to choose the drapes and all the rest of it. It’s really important to actually see what someone else is doing. We don’t really sit down and discuss it. We sort of discussed what we thought the colors for the palace should be. And I kind of came up with that, and then the heraldry and all the flags and everything would work in with what all the guards were wearing or the servants were wearing.

You don't want to miss Sandy's divine work in "Cinderella"... in theaters this weekend, March 13th. 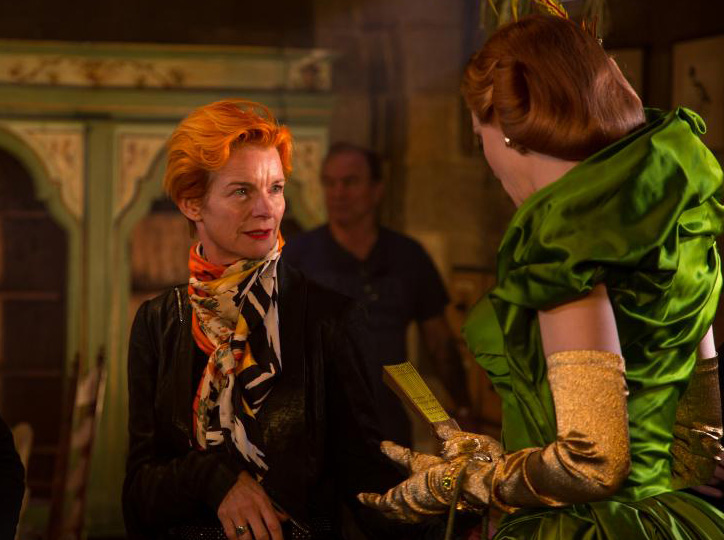 Sandy with Cate on set

L. A. Glam
DSW Expands Their Shoe Empire With New Stores This Spring