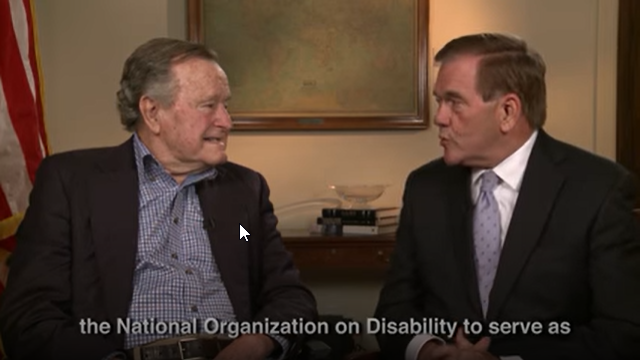 In anticipation of the 25th anniversary of the Americans with Disabilities Act (ADA) on July 26th, the National Organization on Disability (NOD) is releasing a new video featuring a rare and recent interview with President George H.W. Bush, who signed the ADA into law in July 1990.

For 25 years, the ADA has removed barriers and empowered people, promoting equality for Americans with disabilities. In the video, hosted by NOD Chairman Tom Ridge, the first U.S. Secretary of Homeland Security, President Bush, NOD’s Honorary Chairman, calls the ADA among his ‘proudest achievements’ as President of the United States.

“President Bush would be the first to tell you that it took the hard work and creative energy of many people to pass the ADA – and he would be right,” said Gov. Ridge. “But the fact is that without his leadership, personal commitment and political know-how, the ADA would not have become law 25 years ago. It was an honor to have cast a ‘yes’ vote in favor of the ADA as a member of Congress and an even greater honor to have this conversation with the President to reminisce about its passage. Most of all, I am delighted this video will serve to remind Americans about one of his greatest achievements over a long and distinguished career in public service. President George H.W. Bush is an American hero.”

The nearly six-minute video, which can be viewed at NOD.org, features archival footage and photography of the many Americans who fought so hard for the ADA’s passage. In response to a question from Gov. Ridge about how the President’s administration galvanized bipartisan support for the ADA, President Bush agreed that factor was crucial to the legislation’s success. “If it had just been one party, it would have been less effective,” President Bush said. “It’s something I’m very proud of – perhaps proudest of when I was President.”

In support of this historical anniversary, NOD is making the video available to be shown at major ADA celebrations, including a special showing at one of the largest gatherings on July 27th in Washington, D.C., hosted by the National Disability Leadership Alliance, with appearances by current and former members of Congress.