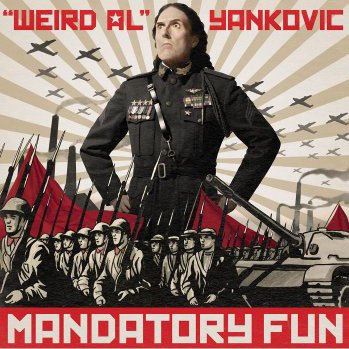 After more than 30 years on the charts, comedian-singer “Weird Al”Yankovic earns his first No. 1 album on the Billboard 200, as “Mandatory Fun” debuts atop the list. The album is the first comedy set to top the chart since 1963, and logs the largest sales week for a comedy album since 1994. “If you’d told me 30 years ago this would happen, I never would’ve believed it,” Yankovic tweeted on Wednesday. “If you’d told me 2 WEEKS ago, I never would’ve believed it.” “Mandatory Fun” was released July 15 through Way Moby and RCA Records, and sold 104,000 copies in the week ending July 20, according to Nielsen SoundScan. It was promoted by a well-received daily viral video campaign that launched Monday, July 14. Starting with his parody of Pharrell’s “Happy,” Yankovic released eight music videos for the album through the week on various sites, like The Wall Street Journal, Yahoo, Nerdist, College Humor and YouTube.

“Mandatory” is the first comedy album to top the Billboard 200 since Allan Sherman’s “My Son, The Nut” spent eight weeks at No. 1 beginning on the chart dated Aug. 31, 1963. A couple of comedy sets came close since then, including Steve Martin’s No. 2-peaking “A Wild and Crazy Guy” back in 1978 and a pair of No. 2 Cheech & Chong titles in the early 1970s. Also, Yankovic’s sales week is not only his biggest since SoundScan started tracking sales in 1991, it’s also the largest for a comedy album since 1994, when “The Beavis & Butt-Head Experience”sold 118,000 copies in the week ending Jan. 2. That compilation album was presented by the animated duo, and had comedy skits interspersed with rock songs from the likes of Anthrax and Aerosmith. (Beavis and Butt-Head also memorably duetted with Cher on a new rendition of “I Got You Babe.”)