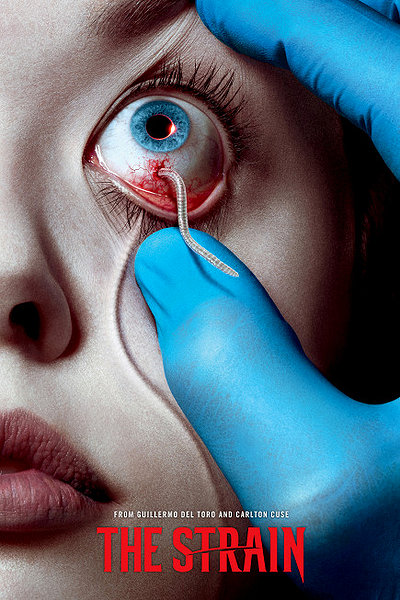 He is here. FX’s drama series "The Strain" is headed to San Diego Comic-Con with an exclusive fan event on the evening of Saturday, July 26 at the Reading Cinemas Gaslamp 15. The event will give fans an inside look at the first two episodes of "The Strain," props and costumes from the show, as well as a sneak peek into never-before-seen footage from the upcoming episode airing July 27 on FX. Attendees will also be treated to free food, drinks, giveaways and special appearances. VIP access for a limited number of fans will be granted per the details below.

"The Strain" is a high concept thriller from Co-Creators, Executive Producers and Writers Guillermo del Toro and Chuck Hogan. The series, starring Corey Stoll, Mia Maestro, Sean Astin, Kevin Durand, Natalie Brown, Jonathan Hyde, Richard Sammel, Robert Maillet, Jack Kesy, Ben Hyland and Miguel Gomez, tells the story of “Dr. Ephraim Goodweather,” the head of the Center for Disease Control Canary Team in New York City. Goodweather and his team are called upon to investigate a mysterious viral outbreak with hallmarks of an ancient and evil strain of vampirism. As the strain spreads, Eph, his team, and an assembly of everyday New Yorkers, wage war for the fate of humanity itself. Emmy Award winning Writer and Producer Carlton Cuse serves as Executive Producer/Showrunner and Writer. Gary Ungar also serves as Executive Producer. The series is produced by FX Productions. The Strain airs Sundays at 10:00 pm ET/PT only on FX.