Movie Review: “The Hobbit: The Battle Of The Five Armies” Is A Fight Worth Waiting For 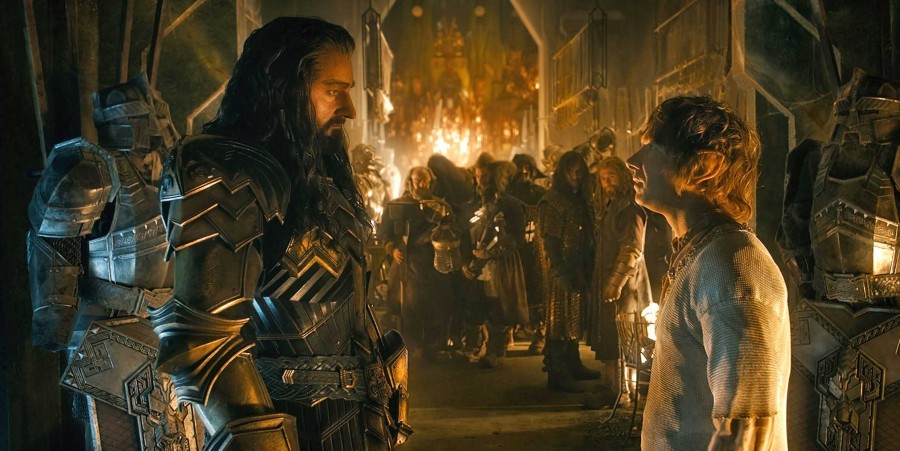 “The Hobbit: The Battle of the Five Armies” is the grand finale of director Peter Jackson’s trilogy based on the fantasy tale by J.R.R. Tolkien. Captivating cinematography and jaw-dropping special effects make the third installment equally, if not more entertaining than its predecessors. That, combined with the fast-moving choreographed fight scenes in 3D, make this final chapter the mother of all fantasy wars.

“The Battle of the Five Armies” picks up where the last film left off; in the midst of Bilbo Baggins’ (Martin Freeman) adventures with Thorin Oakenshield’s (Richard Armitage) company of Dwarves. After overcoming many obstacles on their journey to claim the mountain of gold, the Dwarves of Erebor have finally reached their homeland. There was just one thing standing in their way: the fire-breathing Dragon, Smaug (Benedict Cumberbatch).

[SPOILER] Thorin and his small army of dwarves witness Smaug decimating the Lake-town below; killing defenseless men, women and children. Bard (Luke Evans) is the hero of the day, slaying the dragon before it can kill everyone in sight. With the remaining survivors left homeless and the news of the unguarded kingdom of gold, they march to take the wealth and rebuild. But Lake-town’s citizens are not the only ones with greed on their mind. Sauron, the Dark Lord, has sent forth Azog (Manu Bennett) and his legions of Orcs in a stealth attack upon the Lonely Mountain and Thranduil (Lee Pace) commands his army of Elves to fight for his precious lost jewels. Meanwhile, back at the treasure chest, Thorin suffers from dragon-sickness, and his desire to find the legendary Arkenstone. Each leader has one goal in mind: to fight for the gold. And so the battle begins.

Sweeping shots of majestic landscapes and terrifying hulking monsters; Jackson and his creative team have outdone themselves with the fascinating imagery for the epic conclusion. The visual effects by Weta Digital, led by senior visual effects supervisor Joe Letteri, are certainly worthy of another round of Academy Awards. The meticulous period sets are out-of-this-world, designed by Simon Bright and Ra Vincent. On the costume end, Richard Taylor, Bob Buck and Ann Maskrey were a brilliant design team. Each character’s attire was intricately crafted, from the Dwarves armor, to the Orcs’ skull heavy uniforms.

There are an equal amount of outstanding dramatic performances throughout the cast, as well as the always entertaining and comical portrayal of Bilbo by Martin Freeman. The screenwriting even lent some humorous moments to Ian McKellen’s Gandalf the Grey. Richard Armitage digs deep playing the dark side of Thorin Oakenshield, cast under the spell of greed and selfishness. Cate Blanchett delivers a brief, but memorable appearance as Galadriel. The usual suspects do a fine job, from Orlando Bloom to Aidan Turner.

“The Hobbit” films are the epitome of exciting adventure. You are thrust onto the battlefield, right in between the gripping sword fighting. If you are looking to escape from the real world, “The Battle of Five Armies” will fly you into the universe of fantasy.