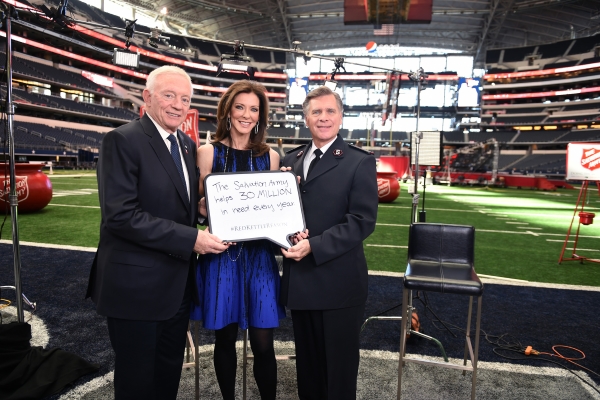 The Dallas Cowboys kicked off the 124th annual Salvation Army Red Kettle Campaign when the Jones family made this season’s first official kettle donation at halftime of the nationally televised Cowboys Thanksgiving Day game on FOX against the Philadelphia Eagles. For the past 18 years, the Dallas Cowboys have helped The Salvation Army kick off the campaign, which has raised more than $1.8 billion in that time.

For the official campaign kickoff, Jerry Jones, owner and general manager of the Dallas Cowboys, and wife Gene made their annual “kettle drop” - which is the inaugural donation to the Red Kettle Campaign - at the start of halftime. The Jones Family has made the kettle drop each year since 1997, when the Cowboys and The Salvation Army began their partnership.

Red Kettle Kickoff is just the beginning of an exciting holiday season for The Salvation Army. In addition to #RedKettleReason, more than 25,000 Red Kettles are stationed at storefronts and street corners nationwide, and there are many other ways to get involved:

From its humble beginnings as a San Francisco donation collection by Salvation Army Captain Joseph McFee in 1891, the Red Kettle Campaign has grown into one of the most recognizable and important charitable campaigns in the United States. It provides toys for kids, coats for the homeless, food for the hungry and countless social service programs year-round.

FYI
John Lennon's Artwork To Exhibit Across The U.S.