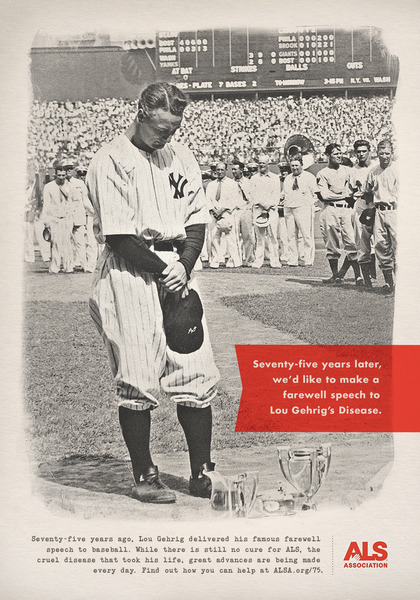 Seventy-five years ago, on July 4, 1939, Lou Gehrig delivered what is now known as sports’ most famous speech. Suffering from the symptoms of amyotrophic lateral sclerosis (ALS), he died less than two years later at the age of 37. Today, Gehrig remains an inspiration, representing fortitude, humility and courage to the tens of thousands of Americans living with Lou Gehrig’s Disease.

During this special anniversary year, beginning in May, ALS Awareness Month, and culminating in July, The ALS Association will be honoring Gehrig’s legacy in a nationwide campaign to raise money for cutting-edge research to find treatments and a cure for the cruel disease that now bears his name. To learn more about Gehrig and the state of ALS research visit www.ALSA.org/75.

“Fans, for the past two weeks you have been reading about the bad break I got. Yet today I consider myself the luckiest man on the face of this earth,” were Lou Gehrig’s words on July 4, 1939 at Yankee Stadium. As teammates, fans, friends and family looked on and wept, he concluded his speech that day with the memorable words: “I might have had a bad break, but I’ve got an awful lot to live for.”

ALS is a progressive neurodegenerative disease that affects nerve cells in the brain and the spinal cord. Eventually, people with ALS lose the ability to initiate and control muscle movement, which often leads to total paralysis and death within two to five years of diagnosis. For unknown reasons, veterans are approximately twice as likely to develop ALS as the general population.

“While Gehrig was the first face of ALS, this ALS Awareness Month we want to not only honor his legacy but also recognize the thousands of individuals that are currently impacted by the disease. Raising awareness is a crucial step in generating support for our efforts to find treatments and a cure for today’s faces of ALS,” said Jane H. Gilbert, President and CEO of The ALS Association.

Visitors to www.ALSA.org/75 can learn more about Lou Gehrig, ALS and the latest groundbreaking research. They can also read stories of those impacted by the disease or make a donation to support research projects led by the world’s top ALS scientists.