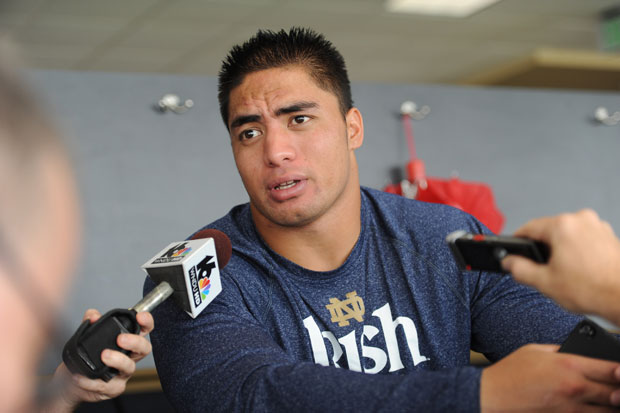 We may never know the truth behind the Manti Te’o story, but something is definitely rotten in Denmark. The former star Notre Dame linebacker has been under constant attack ever since Deadspin.com reported last Wednesday that his “girlfriend,” whom he claimed tragically died of Lukemia in September, actually never existed.

Deadspin reported it was all a hoax, and insinuated that Te’o had a hand in it.

Now, in an interview with Katie Couric (to air Thursday), Te’o admits to lying on some level. “Katie, put yourself in my situation. I, my whole world told me that she died on Sept. 12. Everybody knew that. This girl, who I committed myself to, died on Sept. 12.” Te’o told Couric, “Now I get a phone call on Dec. 6, saying that she’s alive and then I’m going to be put on national TV two days later. And to ask me about the same question. You know, what would you do?” He lied.

A mere month ago, Te’o was considered something of a national hero. He was the leader of college football’s best defense, whose strong play led Notre Dame to its first National Championship appearance in decades. And he did all this, as hundreds of media outlets reported in the months leading up to the national title game, despite dealing with the deaths of his grandmother and “girlfriend” within hours of one another. Or so we thought.

Then the heartwarming story took an abrupt turn into the Twilight Zone. Deadspin.com reported last Wednesday that Te’o’s supposed girlfriend, Lennay Kekua, did not actually exist. She had never attended Stanford, or gotten into a car accident, or been diagnosed with Lukemia. She was merely the central piece of an elaborate hoax.

In a two-hour, off-camera interview with ESPN’s Jeremy Schapp last Friday, Te’o claimed he was “never” a part of perpetrating the hoax and was merely the victim of a “sick joke.”  But can we really believe him? He never admitted to lying one week ago, yet changed his story when speaking to Couric. If Te’o was so innocent, why did he refuse to appear on camera until now? Why did he have his lawyer in the room him the whole time when speaking to Schapp? Why did he wait two days after the story broke to do damage control?

The question now becomes, is Te’o just incredibly naive and was “Catfished?” Or is he a pathological liar who tried to capitalize on the feel-good story to earn sympathy Heisman Trophy votes?

My take: the truth lies somewhere in between. But one thing is clear, we will never look at Manti Te’o the same again.