Why Are The Grammys Going Country? 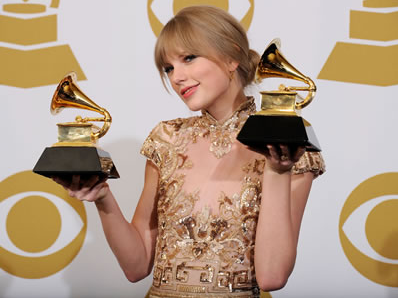 For the first time in its five-year history, the Grammy Nominations Concert LIVE- Countdown to Music’s Biggest Night will be held outside of Los Angeles in none other than the down-home country town of Nashville, Tennessee. What is the point of this southeastern move? Nashville already had its award show, the CMAs, but now the Grammy nominations are headed that way as well. Perhaps accommodating the country cross over pop dominator, Taylor Swift, who currently resides in Nashville and is co-hosting the event with LL Cool J, had something to do with it. To say that she has pull in the industry is a vast understatement, and now it seems that the Academy of Recording Arts and Sciences is feeling that tug.

It is possible that they are taking their lead from those such as Rolling Stone, who seem completely content in transforming their website into a Swift fan blog. I called NARAS to pose the question of why exactly this Los Angeles institution has made the decision to bring the Grammy nominations to Nashville, but at time of print they could not be reached for comment. In lieu of speaking with NARAS I asked CBS, the station airing the event, why Nashville was chosen as the destination for the nominations. They expressed that it was always their intention to move the nominations around to different music hubs. Still, it seems that Memphis, the birthplace of rock and roll might have been a better first choice than the boot stompin’ grounds of Nashville.

As a town, Nashville really has nothing to do with other kinds of music such as pop, rock, jazz and R&B. They are essentially a country city, and that isn’t what the Grammys are all about. Or are they? Ken Ehrlich, longtime Grammy producer, has said that they will do a tribute to Johnny Cash, to Nashville and to country music tonight at the Bridgestone Arena, which he thinks, “will be magical.”

This seems odd as, again, this is the Grammys and not the CMAs. The big artists on nomination watch are people like, PSY, Justin Bieber, fun., Maroon5, Adele, Frank Ocean, Carly Rae Jepsen and Mumford and Sons. None of these people are country. Doing the Grammy nominations in Nashville instead of L.A. or another likeminded city is a bit like deciding on a whim to do New York Fashion Week in Los Angeles. Of course L.A. has a great fashion scene, but it isn’t NY, and it isn’t really the right place for that kind of event.

Adding to the slight strangeness of the evening is Swift’s co-host, LL Cool J. This is truly an odd pairing. It seems natural that CBS would want to use their star, but that doesn’t make the combination of Swift and LL any less puzzling. Is this hosting duo of young and old an attempt to cover all the demographic areas of viewership?

At least they’re still having the actual ceremony in Downtown’s Staples Center on February 10th, 2013. But, after that it’s anyone’s guess.