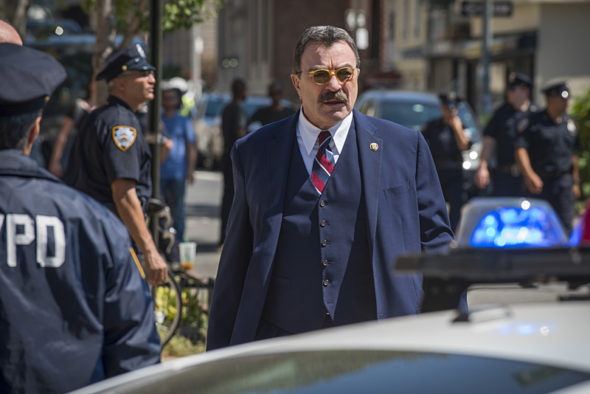 CBS announced today that BLUE BLOODS has been renewed for the 2019-2020 television season, and Tom Selleck has signed a new deal to return for the show’s 10th year on the network. The top-10 series will celebrate its 200th episode when the show premieres in fall 2019.

“BLUE BLOODS has been a top-10 drama and Friday’s top-rated show every year it’s been on the air,” said Kelly Kahl, President, CBS Entertainment. “On a night that many have claimed is quiet for broadcast television, its quality writing, superb acting and familial warmth have attracted an average of over 13 million passionate viewers each week for nine years. We are delighted that Tom will return and that the show will continue to be a vital component of the CBS schedule next season.”

BLUE BLOODS is currently the #8 most-watched show in all of broadcast television. It is also a digital success, and is the most-watched network drama on CBS’ digital platforms, including CBS All Access. The series premiered on Sept. 24, 2010, and has always maintained its position on Fridays at 10:00 PM.

BLUE BLOODS is the latest series pickup for CBS. The Network has also renewed YOUNG SHELDON, MOM, CRIMINAL MINDS, NCIS and the freshman hits FBI, GOD FRIENDED ME, THE NEIGHBORHOOD and MAGNUM P.I. for next season.