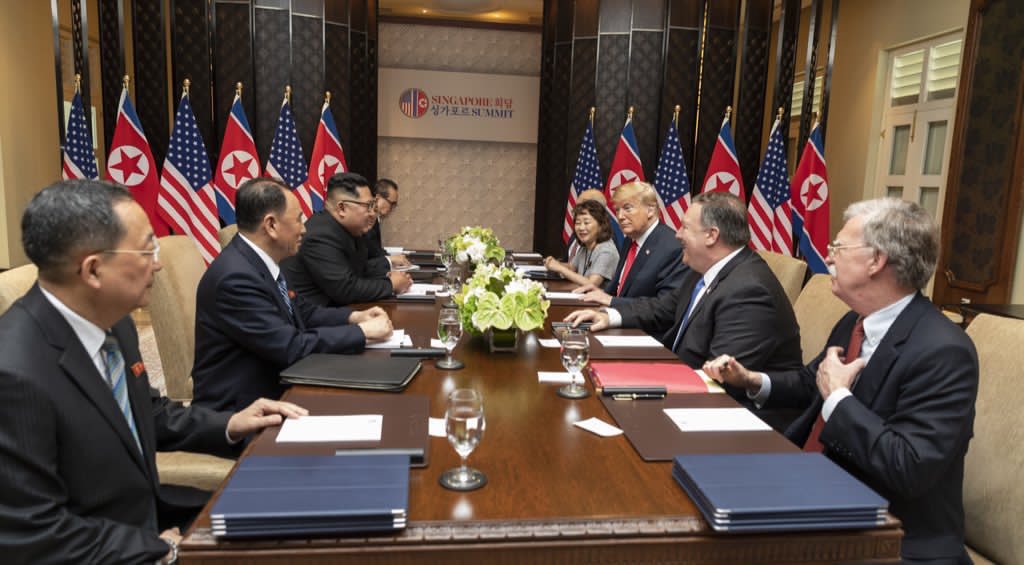 President Donald J. Trump of the United States of America and Chairman Kim Jong Un of the State Affairs Commission of the Democratic People’s Republic of Korea (DPRK) held a first, historic summit in Singapore on June 12, 2018.

Trump and Kim Jong Un conducted a comprehensive, in-depth, and sincere exchange of opinions on the issues related to the establishment of new U.S.–DPRK relations and the building of a lasting and robust peace regime on the Korean Peninsula. Trump committed to provide security guarantees to the DPRK, and Kim Jong Un reaffirmed his firm and unwavering commitment to complete denuclearization of the Korean Peninsula.

Having acknowledged that the U.S.–DPRK summit—the first in history—was an epochal event of great significance in overcoming decades of tensions and hostilities between the two countries and for the opening up of a new future, Trump and Kim Jong Un commit to implement the stipulations in this joint statement fully and expeditiously.

The United States and the DPRK commit to hold follow-on negotiations, led by the U.S. Secretary of State, Mike Pompeo, and a relevant high-level DPRK official, at the earliest possible date, to implement the outcomes of the U.S.–DPRK summit.

Both leaders have committed to cooperate for the development of new U.S.–DPRK relations and for the promotion of peace, prosperity, and security of the Korean Peninsula and of the world.