Movie Review: ‘Dark Crimes’ is a Cold Case Thriller That Never Heats Up

In a rare dramatic turn for the actor, Jim Carrey plays a Polish detective investigating a cold case murder involving sex games gone awry and an author whose latest novel may contain a confession to the killing in “Dark Crimes,” a moody and aimlessly dark crime thriller co-starring Marton Csokas and Charlotte Gainsbourg.

Loosely based on David Grann’s superb 2008 New Yorker article about the murder of Dariusz Janiszewski by Polish postmodern novelist Krystian Bala, this contrived cat-and-mouse thriller from Greek filmmaker Alexandros Avranas aims to be an intellectually-minded mystery with a kinky twist, but ultimately wastes an intriguing premise and abandons its riveting source material for implausible twists and shock value thrills. Although Avranas employs a compelling directorial style – he juxtaposes painterly static shots with chaotic images of grisly violence and sadomasochistic sex – his artful flourishes often get drowned out by Jeremy Brock’s misguided screenplay, which raises many interesting questions about the slipperiness of truth and the dark side of human nature, but fails to deliver satisfying conclusions from either an intellectual or narrative standpoint. And while Jim Carrey playing against type as a psychologically tortured Polish detective may be an appealing selling point, the results of that casting choice aren’t nearly as interesting as one would hope.

Set in Krakow, Poland, “Dark Crimes” follows Tadek (Jim Carrey), a detective and religious family man whose reputation took a hit after an unnamed indiscretion the previous year earned him a demotion. Seeking redemption, Tadek decides to investigate a cold case initially assigned to Greger (Robert Wieckiewicz), now the Chief of Police, involving a man who was tortured, tied up in an excruciating position called The Fly, and dropped in a nearby river to drown. 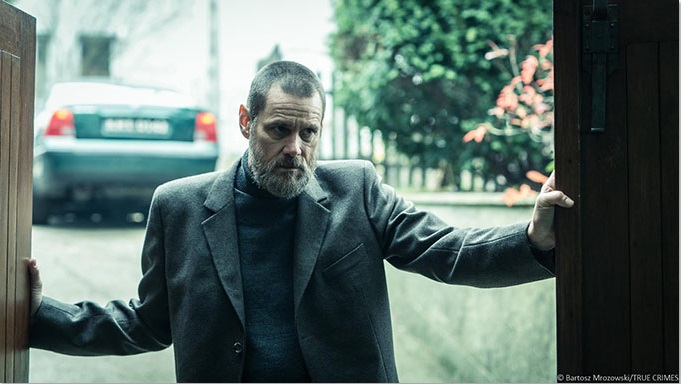 While investigating a sadomasochistic sex club called The Cage that the victim liked to frequent, Tadek learns of some prominent locals who were also regulars there, most curiously, a novelist named Kristof Kozlow (Marton Csokas).

Known for dark and decidedly perverted novels that use a postmodern philosophy that questions traditional notions of truth to justify horrific acts, as Tadek looks into Kozlow as a potential suspect, he discovers some deeply disturbing similarities between the cold case murder and the description of a killing, written in the first person, in the author’s latest work. Convinced that Kozlow is the killer, Tadek grows increasingly obsessed with convicting him, which leads him down a dangerous path that jeopardizes his family and his moral standing. The deeper Tadek gets into the case, the further from the truth he seems to get, with Kozlow upping the ante of his mind games every step of the way.

Working with cinematographer Michal Englert, director Alexandros Avranas succeeds in laying the foundation for an eerie tone, favoring a muted color palette that effectively emphasizes the dark and dreary setting of this macabre tale. But even though the film is tonally on point and the filmmaker shows a clear facility for pacing and framing, the subpar script by Jeremy Brock (“The Last King of Scotland”) leads the audience astray with its ill-conceived twists and underwritten characters. In the end, the whole twisty endeavor adds up to little more than a perverted puzzle with a bunch of pieces that don’t fit together, a series of artfully gloomy shots populated by an exceptional international cast who have a better handle on their characters than the filmmakers do on the surrounding film. 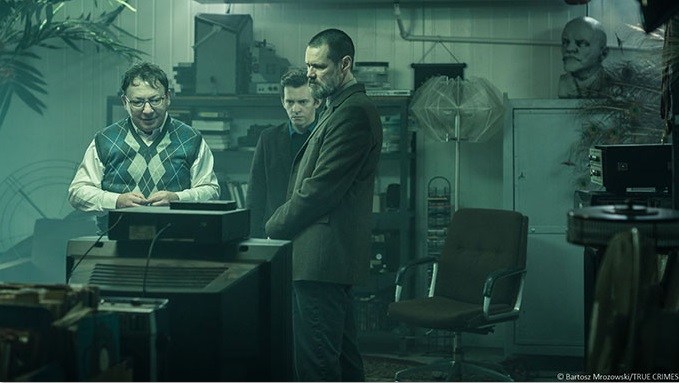 As for the acting, while it’s always nice to see an actor play against type, particularly a comedian crossing over to drama, I’m very unhappy to report that not only is “Dark Crimes” an unmemorable film, the same can be said of Jim Carrey’s performance as Detective Tadek. Only half-committing to the Polish accent, and alternating between stoicism, befuddlement and torment, Carrey’s performance feels emotionally accurate to the proceedings at hand but never authentic, falling short of the gritty realism to which the film aspires. Additionally, there are a couple moments, such as a full-throttle orgasm shot in close-up after a violent sexual encounter, or a cathartic cry during a particularly rough patch in the investigation, when Carrey’s performance is so deliriously, laugh-inducingly over-the-top, that it nearly negates anything good that preceded it.  On the supporting side, Marton Csokas captivates as he sinks his teeth into the role of the literary bad boy and prime suspect Kozlow, while Charlotte Gainsbourg is convincingly conflicted as Kasia, Kozlow’s ex-girlfriend and a former sex club worker with some secrets up her sleeve.