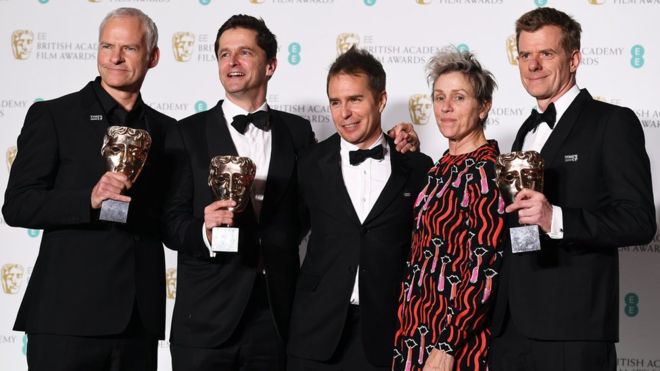 The winners of the EE British Academy Film Awards were announced at the ceremony hosted by Joanna Lumley at the Royal Albert Hall, London, on Sunday 18 February 2018.

Guillermo del Toro wins Director for The Shape of Water.

Supporting Actress went to Allison Janney for her role as Tonya Harding’s mother in I, Tonya.

Raoul Peck won the Documentary award for I Am Not Your Negro. Film Not in the English Language was won by South Korean drama The Handmaiden and Coco took the BAFTA for Animated Film.

Writer/director Rungano Nyoni and producer Emily Morgan received the award for Outstanding Debut by a British Writer, Director or Producer for I Am Not a Witch.

Baby Driver received the BAFTA for Editing and Phantom Thread won for Costume Design. James Ivory won for Adapted Screenplay for Call Me by Your Name and Dunkirk for Sound. Cowboy Dave won the British Short Film award.

The Special Award for Outstanding British Contribution to Cinema was presented to the National Film and Television School (NFTS). The school has trained generations of BAFTA-nominated film talent; this year’s British Short Animation award was won by Poles Apart, which is the 13th NFTS graduation film to win a BAFTA.

The Fellowship, the highest honour the Academy can bestow was presented to director and producer Sir Ridley Scott by HRH The Duke of Cambridge, President of BAFTA, and Sir Kenneth Branagh.

The EE Rising Star Award, voted for by the public, went to Daniel Kaluuya.

The ceremony, which was hosted for the first time by Joanna Lumley, was held at London’s Royal Albert Hall, and featured performances by Cirque du Soleil and the Kanneh-Mason family.

As part of BAFTA’s year-round programme of events and initiatives, many of this year’s nominees took part in ‘BAFTA Film: The Sessions’ on Saturday 17 February. The Sessions saw the nominees discuss their craft in interviews that will be available online on BAFTA Guru in the coming weeks.

In addition, all of the nominated short films are now available to view in Curzon cinemas around the country and online at  https://www.curzonhomecinema.com/.