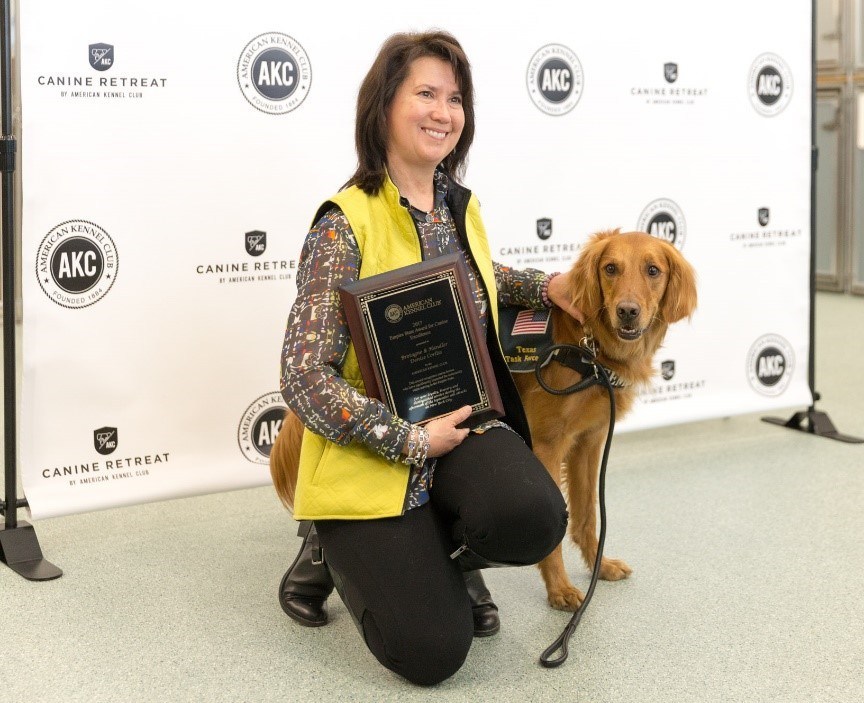 The American Kennel Club (AKC®) posthumously presented the last surviving 9/11 search and rescue dog, Bretagne, with the 2017 Empire State Award for Canine Excellence (ACE) on Tuesday, March 21st. This award recognizes canine heroes who have significantly impacted the community while serving in the Empire State.

Bretagne, a 16-year-old Golden Retriever, owned and handled by Denise Corliss, was the last surviving 9/11 search and rescue dog before her passing in June of 2016, at the age of 16. As members of Texas Task Force 1 Search and Rescue Organization, the pair responded to the World Trade Center tragedy in New York shortly after the September 11th attacks in 2001. At age two, as a newly certified FEMA Search and Rescue Dog, searching through the debris and rubble of Ground Zero was Bretagne's first ever deployment.

Denise Corliss accepted the prestigious award on behalf of her fallen partner, Bretagne at a press conference on Tuesday at the American Kennel Club's new pet care space, AKC® Canine Retreat. Bretagne was a devoted dog as well as a source of comfort for the human teams working the tragic scene.

"Bretagne was a dedicated, courageous and loyal working dog whose commitment and bravery has not gone unnoticed," said AKC Vice President Gina DiNardo. "She and handler, Denise Corliss, worked tirelessly day in and day out after the September 11th attacks, and the impact they have made on the Empire State is truly inspirational. We are proud to honor their contributions."

Bretagne retired as a disaster search and rescue dog at age nine but continued serving her community, working as a goodwill ambassador and reading assistance dog. In addition to their significant work at Ground Zero in the aftermath of 9/11, Bretagne and Denise Corliss deployed as a search team in response to Hurricane Katrina, Hurricane Rita, Hurricane Ivan and many other disasters.

Since September 2001, The AKC has supported search and rescue organizations through its "DOGNY, America's Tribute to Search and Rescue Dogs" initiative which raised over $3.5 million. These efforts helped rescuers in the aftermath of 9/11.

Lifestyle
The Labrador Retriever Tops Most Popular Dogs List In The U.S.