Rodger Saffold is the Los Angeles Rams nominee for the WALTER PAYTON NFL MAN OF THE YEAR AWARD. 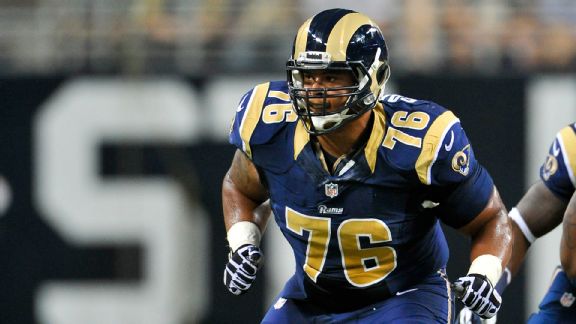 Representing the best of the NFL’s commitment to philanthropy and community impact, Saffold was selected as the Rams Man of the Year and is now eligible to win the national award. Considered one of the League’s most prestigious honors, the Walter Payton NFL Man of the Year Award recognizes an NFL player for outstanding community service activities off the field as well as excellence on the field.

Three of the nominees will be selected as finalists for the national award, renamed in 1999 after the late Hall of Fame Chicago Bears running back WALTER PAYTON. Finalists will be announced in January 2018. The winner will be announced in Minneapolis at NFL Honors, a two-hour primetime awards special to air nationally on Feb. 3, the night before Super Bowl LII, from 8-10 PM (ET and PT) on NBC.

For many years, Saffold has been a community leader for the Rams and has been active in a variety of charitable efforts since the team’s relocation to Los Angeles. He has engaged in initiatives with Heart of Los Angeles, Cedars-Sinai hospital, Los Angeles Regional Foodbank, United Way of Greater Los Angeles, Operation Progress, Inglewood Unified School District, and Single Mom Planet Awards. Saffold also has been an active supporter of Big Brothers Big Sisters and purchases 50 tickets for each Rams home game to provide NFL game experiences to “bigs” and their “littles” as well as children, who are waiting to be matched with a “big.”

“Rodger is an established leader in the locker room and someone who we can always count on to assist with our community outreach efforts,” said Molly Higgins, Rams Vice President of Community Affairs and Engagement. “He understands and appreciates the platform that he has to create memories and impact lives. Beyond his inspiring long-term commitment to Big Brothers Big Sisters and their important mission and his passion for Children’s Miracle Network and the Extra Life efforts, he is always willing to assist us in responding to the various needs of the community and lend a helping hand where one is needed.”

Starting in Week 14, the Walter Payton NFL Man of the Year trophy silhouette will appear in uniform elements to further recognize past award winners and current nominees. Saffold will wear a Man of the Year helmet decal through the end of the season, in recognition of his accomplishments on and off the field.

Additionally, five hundred thousand dollars will be donated in the name of the 2017 winner as $250,000 will be donated to the winner’s charity of choice and $250,000 will be donated in his name to expand Character Playbook across the country. The two other finalists will each receive a $100,000 donation to their charity of choice and a $100,000 donation in their names to expand Character Playbook. All donations are courtesy of the NFL Foundation and United Way Worldwide.