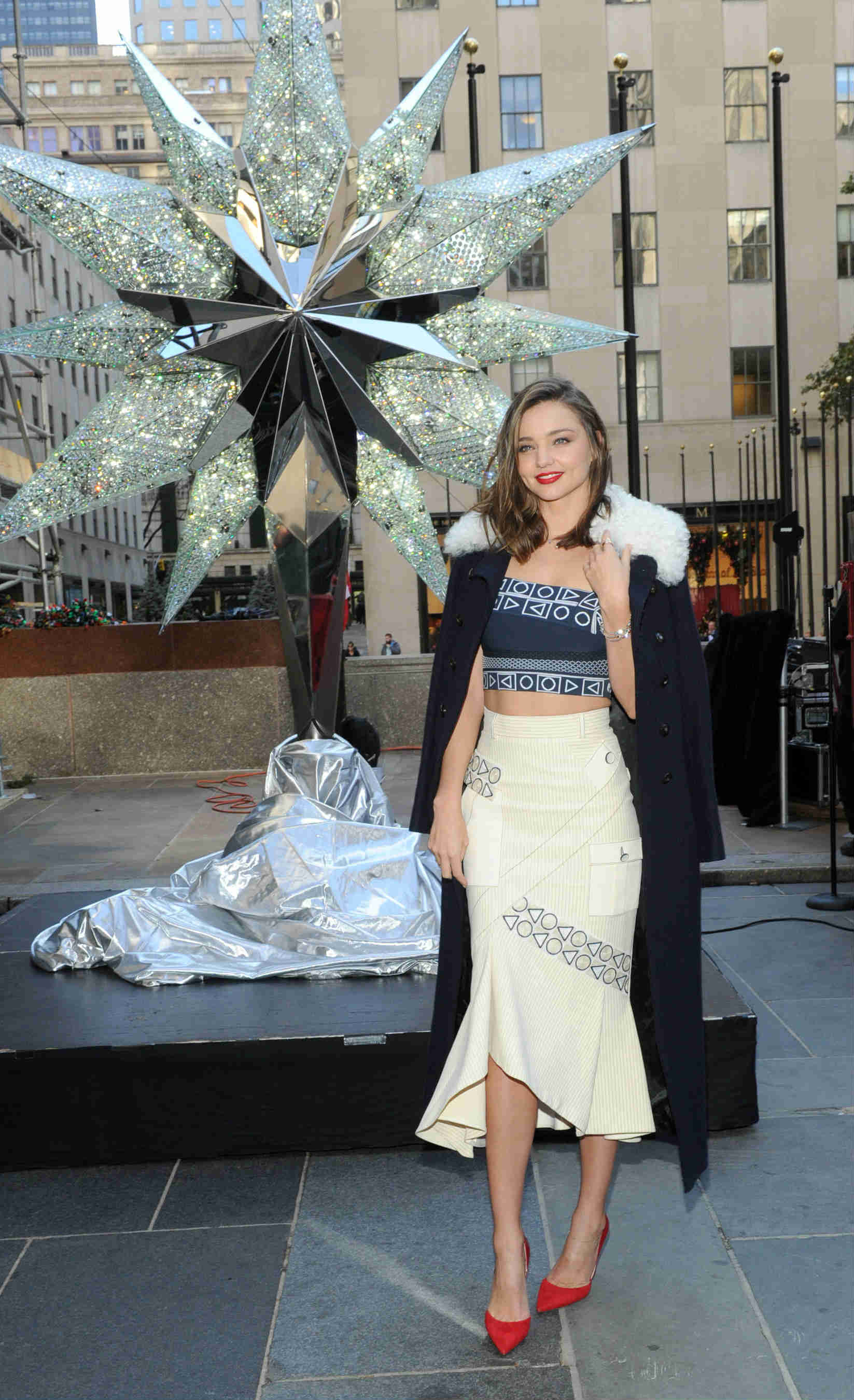 Model and jewelry design collaborator Miranda Kerr joined Nadja Swarovski, Member of the Executive Board, Swarovski Crystal Business, today as the Swarovski Star was raised to the top of the world-famous Rockefeller Center Christmas Tree.

Kerr, the super model and long-time brand muse, donned a necklace and bangles from the jewelry collection she designed with Swarovski, the leading designer and producer of fashion jewelry and crystal decor objects. "My collection is very much inspired by the magic of the holidays – my favorite time of year – and it is very a special moment for me to be a part of such an iconic Christmas tradition," said Kerr.

The Swarovski Star is comprised of 25,000 crystals, with one million facets, measuring 9 ½ feet in diameter and 1 ½ feet deep. The Star weighs 550-pounds, including 300-pounds of crystal panels, and is composed of six outer rays and six smaller inner rays. The Star will sit atop the 78-foot high, 47-foot wide, 10-ton Norway Spruce, where it will stay for the remainder of the 2015 holiday season.

The main surfaces of the rays are made of point-mounted safety glass which is the same shatter-proof glass that adorns the facades of New York City buildings. The crystals are affixed to the inner sides of the glass in a tight, scale-like pattern to ensure maximum brilliance. The Star is illuminated by 720 energy-efficient LED bulbs on 3,000 feet of wire.

A team of nine artisans spent 1,200 hours installing, programming and testing the Star to ensure the effects would withstand the challenging winter weather conditions sitting nearly 80-feet above Rockefeller Plaza. A to-scale replica of the Swarovski Star will also be on display in Rockefeller Center to allow visitors the opportunity to get a closer view of the detailing and craftsmanship.

"We are delighted that the Swarovski Star has become a centerpiece of the Christmas season in New York City," added Swarovski. "This year is especially significant for Swarovski as the company celebrates its 120th anniversary and we are thrilled that we continue to play a role in this holiday tradition."

Originally created for the Rockefeller Center Christmas tree in 2004, the Star was updated in 2009 to feature its dynamic light movement. In addition to Kerr and Swarovski, over the years the Star has been unveiled by celebrities including Olivia Wilde, Blake Lively, Fergie, Christie Brinkley and Maria Menounos.

FYI
'Grinchmas' Is Back At Universal Studios Hollywood