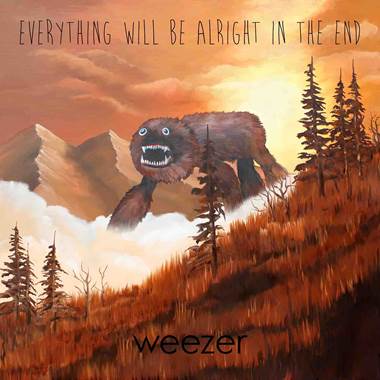 Weezer are thrilled to share the album stream for their highly anticipated ninth record, Everything Will be Alright In The End, released October 7th on Republic Records.  The stream is available to hear tomorrow, September 30th, via iTunes First Play. Meanwhile, today sees the debut of the band’s first music video from the album for single “Back To The Shack” via Noisey/Vice.  Directed by acclaimed visual artist Warren Fu (Daft Punk, The Killers, Julian Casablancas), the clip sees our four rock heroes tackling the final frontier.

Since forming in 1992, Weezer has released a myriad of celebrated, chart-topping albums, selling over 13 million records worldwide.  Following an intensely prolific couple years at the end of the aughts, the band chose to deliberately dial down the tempo in 2010.  When it came time to record their new material earlier this year, Weezer reunited with the man who helped them make some of their most iconic album-length work, Cars frontman Ric Ocasek.  The resulting album is a stand-out gem in Weezer’s vast and varied catalogue, a reflection of a much-loved band at their very best.