Movie Review: "Sin City: A Dame To Kill For" Is A Bloody Good Summer Treat 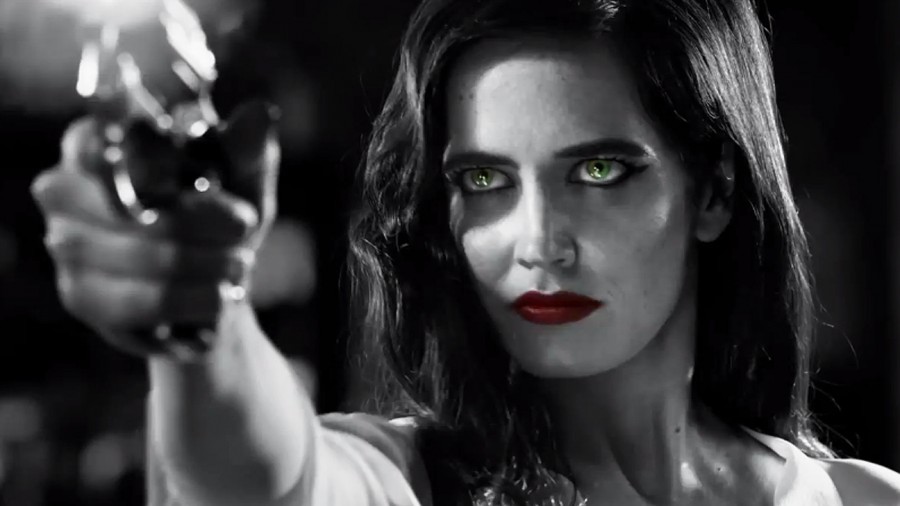 It’s been quite the roller coaster ride for director Robert Rodriguez ever since he teamed up with graphic novel icon Frank Miller for 2005’s “Sin City.” The ultra-stylized, star-studded unexpected hit took the box office by storm and brought in over $150 million domestically. Since then, Rodriguez has helmed world class duds like ‘07’s “Grindhouse,” out of the blue cult classics like “Machete,” and even found time to launch a television network. Now, nine years after the original, Rodriguez and Miller combine forces yet again for “Sin City: A Dame To Kill For.” While it’s almost been a decade since the first one, this much anticipated sequel is every bit as bloody, sexy, and over-the-top as before.  Let’s just say, bullets and babes have never looked better in black and white.

While there are plenty of new faces this time around, fans of the 2005 film will be happy to note that many of the same characters from the original reappear in “Sin City: A Dame to Kill For.” This includes Mickey Rourke's Marv, Jessica Alba's Nancy and Bruce Willis' (now deceased character) detective John Hartigan. 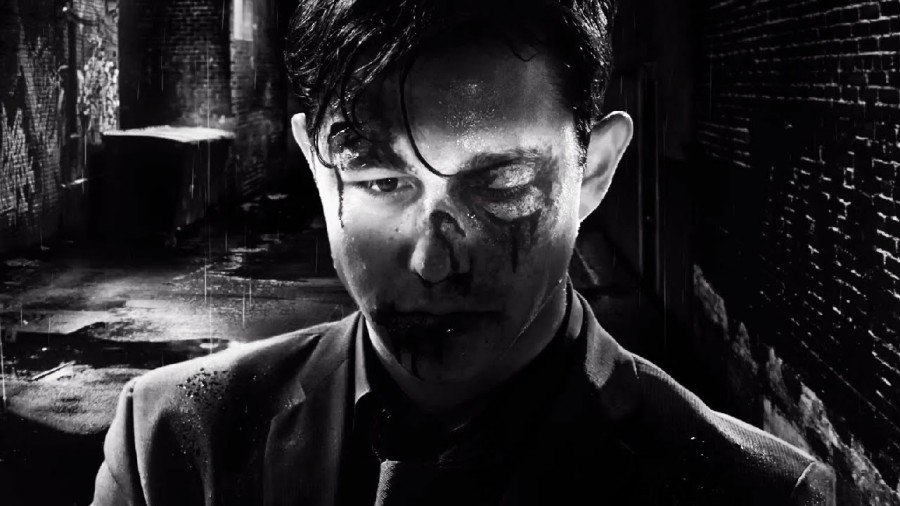 A quick re-watch (or a brief consulting of Sin City’s Wikipedia page) is strongly encouraged before jumping on board this one, as Frank Miller’s script functions as both a prequel and a sequel. Some of the timelines and through lines do get confusing for anyone that isn’t well versed in the world of Sin City, but that also doesn’t mean that newbies will be completely lost.

Much like the original, three concurrent storylines share screen time. The first concerns another returning character—villain Senator Roark (the excellent Powers Boothe) who is equally deft at making life difficult for both Joseph Gordon-Levitt's card shark Johnny and sullen stripper Nancy (Jessica Alba). Both Nancy and Johnny want revenge, but they go about it in completely different ways. These dueling stories also help in splitting the overall narrative into two parts that each bookend the film’s central plot.

In by far the most engaging of the three stories, Josh Brolin plays the role of Dwight McCarthy –taking over for Clive Owen. How is this possible you say? Josh Brolin and Clive Owen don’t look anything alike you say?Well in the world of Sin City, anything can be accomplished with some major plastic surgery. Seriously. 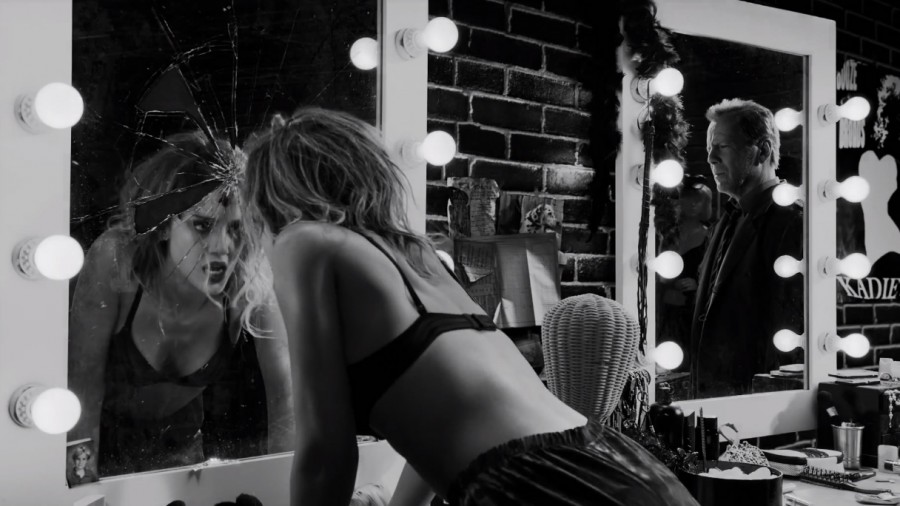 Unfortunately for Dwight, he might have a new face, but he certainly doesn’t have a new attitude towards his psychopathic ex-girlfriend Ava (Eva Green). She easily manipulates him into a murderous act – oh what wondrous things women can do with a few flashes of their bare breasts—and in gloriously unnecessary 3D you can almost see why Dwight is so eager to please his crazy lover.

Dwight isn’t the only character that gets a little bloody during the film’s one hour and forty minute running time. Taking a page out of his buddy Quentin Tarantino’s handbook, Rodriguez injects a hearty helping of broken bones, spilled guts, and dismemberment to “A Dame to Kill For.” For anyone that loves mayhem, Rodriguez and Miller will not leave fans disappointed.

Disappointment does come, however, in the form of the story. The problem with telling three semi-connected tales is that some will naturally be better than others. While Brolin and Gordon-Levitt’s arcs are fun and enjoyable to watch, Alba’s Nancy narrative is unbearable. Not only is Alba unconvincing as the stripper turned suicidal maniac Nancy, but the entire side plot seems like it was just thrown in to quickly kill off a major—no spoilers here—character.  I could have definitely done without Nancy’s extended screen presence, and would have gladly left the theater thirty minutes earlier. 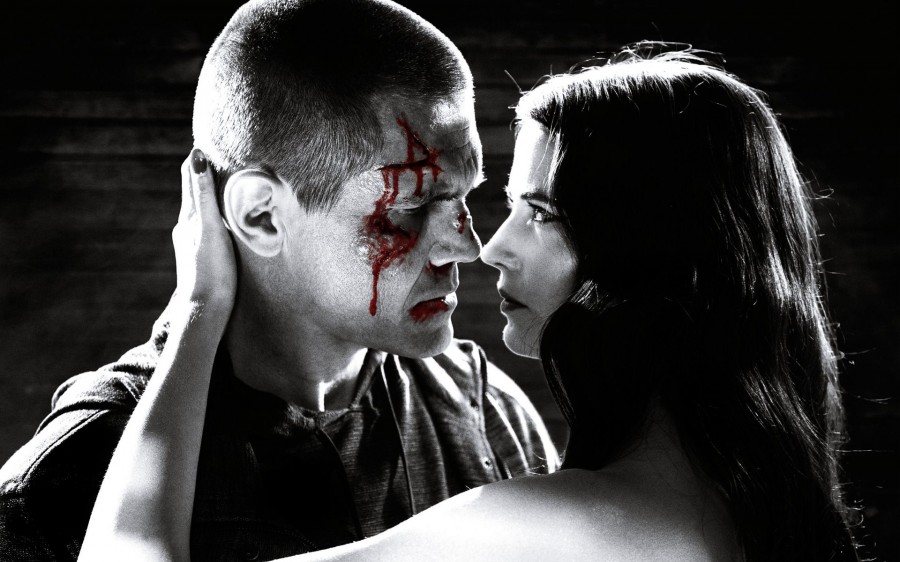 Despite Alba’s disappointing return to character, Mickey Rourke steals the show every time he is on screen. Playing more of a backseat, comic relief role this time around, the legendary actor is a natural in the world of Sin City. New cast members, Josh Brolin and Joseph Gordon Levitt are equally welcome in the city as well.

Speaking of newcomers, it’s also worth noting just a few of the unexpectedly awesome cameos from such celebs as: Christopher Lloyd, Jeremy Piven, Ray Liotta, and even Lady Gaga.

Apart from convincing plenty of their Hollywood friends to take part in their movie, Rodriguez and Miller prove to be a dynamic directing duo in other ways. Rodriguez, who infuses the film with an overwhelming amount of tongue and cheek humor, perfectly aids the absurdly artistic graphic novel style visuals of Miller.

Despite a story that doesn’t live up to the original, “Sin City: A Dame To Kill For” is nonetheless a fantastic end of the summer treat for both existing and new fans alike. Dark, disgusting, and more often than not disturbing, Sin City is still a fantastic fictional city to watch on screen.

With that being said, there’s not enough money in the world that would convince me to live there.

Film
Movie Review: "A Walk Among The Tombstones" Is A Beautifully Shot & Expertly Acted Mystery