Matthew McConaughey Receives His Star On The Walk Of Fame 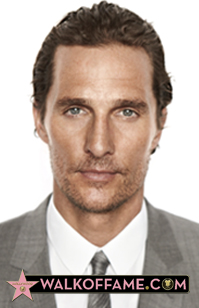 Texas native Matthew McConaughey began his career with a chance meeting in Austin with casting director and producer Don Phillips who led him to director Richard Linklater, who later launched the actor’s career in the cult classic “Dazed and Confused.” Since then, he has appeared in over 40 feature films that have grossed over $1 billion; and has become a producer, director, and philanthropist – all the while sticking to his Texas roots and “jk livin” philosophy.

2014 has been a game changing year for McConaughey. He has received numerous awards and accolades for the critically acclaimed “Dallas Buyers Club” for which he dropped 47 pounds to play to role of AIDS stricken Ron Woodruff. The film was directed by Jean Marc Valle and also stars Jennifer Garner and Jared Leto. For his riveting portrayal McConaughey received an Academy Award®, Golden Globe Award, Screen Actors Guild Award and Gotham Award for Best Actor, the Best Actor Award at the Rome Film Festival as well as the Desert Palm Achievement Actor Award at the Palm Springs Film Festival.