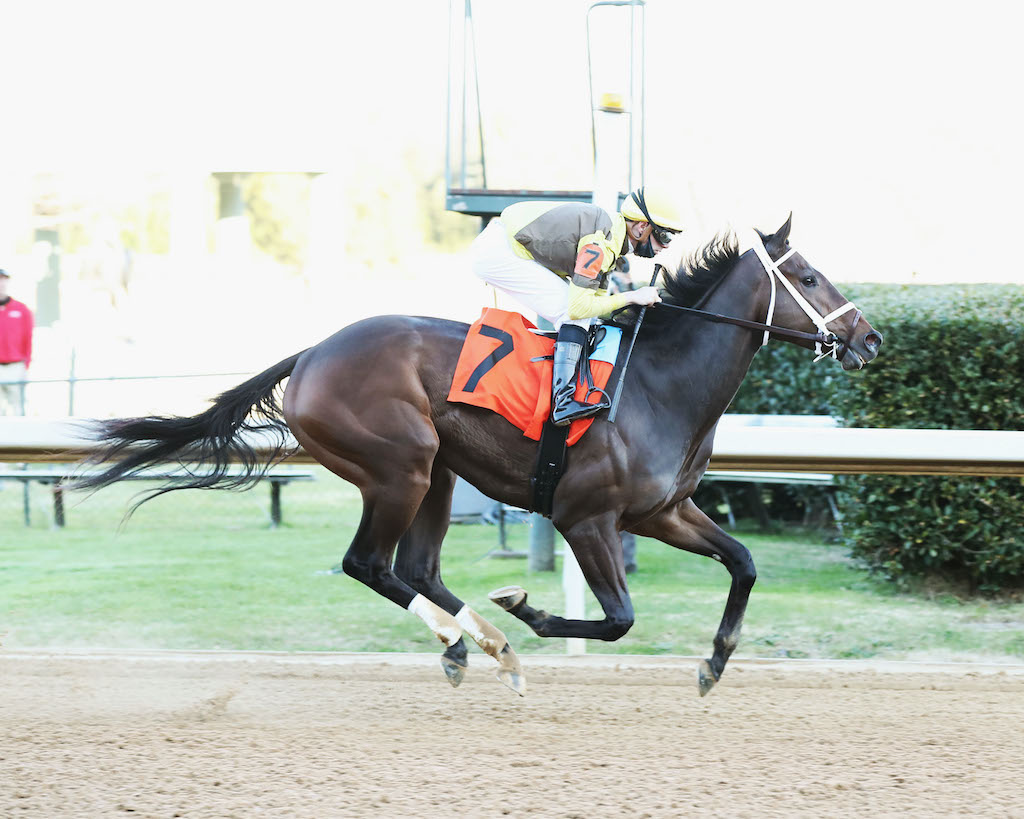 Galloping and jogging over a track listed as good dominated the morning activity on the day before the 147th running of the $3 million Kentucky Derby presented by Woodford Reserve (GI).

BOURBONIC, DYNAMIC ONE, KNOWN AGENDA, SAINTHOOD – Trainer Todd Pletcher put the finishing touches on his Derby colts Friday morning, getting the quartet out early for final gallops prior to their Saturday date with destiny in the form of a mile and a quarter without any water.

Three of his charges were among the first horses on the track, ambling over from Barn 42 and going through the six-furlong gap at 5:15 for mile and a quarter gallops. Known Agenda had his regular exercise rider, Hector Ramos, in the tack; Dynamic One was partnered by Carlos Perez Quevedo, and Sainthood had old buddy Amelia Green aboard.

After that trio got back home safely, the barn’s final Derby contender – Bourbonic with Ramos up – set out at 5:40 for a mile and three-sixteenths spin that completed the handiwork.

“All the heavy lifting is done,” the trainer said. “They’ll all walk the shed(row) tomorrow.”

Pletcher’s father, Jake, was on the scene enjoying the Derby buzz. He fills out the family rooting section that also consists of the trainer’s wife, Tracy, and his three college-age children, two boys (Texas A & M guys) and a daughter (Wake Forest).

Pletcher, of course, has history with the Kentucky Derby. Quite a bit, in fact.

He’s started 55 horses in the race and after Saturday that record mark will rise to 59. Next on that list is his mentor, D. Wayne Lukas, with 49.

The first year he entered the race was 2000 – and he entered it with a bang by running four horses. In 20 of the last 21 runnings, he’s been represented by at least one horse. His only miss was in 2003, the year Funny Cide won it. Pletcher was at Churchill Downs that year, but just watched the race from the stands.

The trainer was asked what was the first Kentucky Derby he remembered.

“The first one I really recall was Affirmed (in 1978),” he said. “I’d watched a few on TV in the years before that (Bold Forbes in ’76 and Foolish Pleasure in ’75), but Affirmed’s race got to me. I watched it in New Mexico where my Dad was running horses and I was a 9-year-old. Steve Cauthen (Affirmed’s rider) was only 16. I related to that.”

When was the first Derby he saw in person?

“I was with Wayne (Lukas) from 1990 through 1995 and he ran a bunch of horses in the Derby those years (11 all told, including ’95 winner Thunder Gulch), but I was working with the New York string,” he recalled. “My first in-person one was in 1999 (won by Lukas’ Charismatic). I ran More Than Ready in the WHAS Stakes for 2-year-olds (he won it) earlier on the card and stuck around to watch the race. (He had More Than Ready back the following year — 2000 — in the Kentucky Derby – where he ran fourth – along with three other starters.) That was the first year I started running horses in the Derby.”

The trainer noted one asterisk on his Derby record.

“I actually wasn’t here last year (when the race was shifted to the first Saturday in September),” he said. “I was in New York at Saratoga. Wayne (Lukas) was good enough to stable my horse (Money Moves) and saddle him.”

Time moves on. Pletcher’s latest remarkable chapter of Derby history will go in the books Saturday.

BROOKLYN STRONG – Mark Schwartz’s Remsen Stakes (GII) winner Brooklyn Strong was one of the last Kentucky Derby winners to arrive at Churchill Downs this week, coming in Tuesday morning, and he was among the last to train Friday, the final day of training before the Kentucky Derby. He jogged once around the track and then galloped slow once around.

“He’s as fit as I can get him on the one week notice,” trainer Danny Velazquez said. “I’m just happy to be here. I have nothing to prove. He was a $5,000 purchase and we’re in the Kentucky Derby. We made the one-percent (of the foal crop).”

The Brad Cox duo galloped about 1 ½ miles at 5:15 a.m. A new member of the Cox team joined them for training this morning – Brad’s youngest son Brodie.

HIDDEN STASH – Trainer Vicki Oliver got an early start on the morning, leaving Lexington at 3:30 to get to Churchill Downs by 5:15 to give BBN Racing’s Hidden Stash a 1 ¼-mile gallop.

“He had an easy gallop this morning and I am undecided on what he will do tomorrow morning,” said Oliver, who has entrants in races one and 10 on Friday’s 13-race program.

Oliver, who is saddling her first Kentucky Derby starter, will give a leg up to jockey Rafael Bejarano on Saturday afternoon. Hidden Stash will represent the 11th Derby mount for Bejarano whose best previous Derby finish was fourth on Papa Clem in 2009.

The well-made colt had been a regular all week for the special 7:30-7:45 a.m. training session reserved for Kentucky Oaks and Kentucky Derby runners only. But Friday he stepped onto the big Churchill Downs oval at 5:30 with regular exercise rider Jonny Garcia at the controls.

He also had his superstar stable pony – the 20-year-old Hall of Famer Lava Man – on his hip and the colt and his “Coach” (as “Lava” is known around the barn) toured the Churchill oval together, never picking up any more steam than a simple jog.

As “Charlie” returned to the six-furlong gap along the outer rail, he moved past his collection of stable admirers, including his trainer, two-time Derby winner Doug O’Neill. The colt proceeded to throw his head repeatedly and pulled hard on his reins. His message was obvious: He wanted more, quite a bit more. The “Charlie” crew all smiled and bumped fists. Their boy was locked and loaded for his historic Saturday assignment.

KEEPMEINMIND – Keepmeinmind, who has been among the first Kentucky Derby contenders on the track each morning, was joined by about a dozen other Derby contenders as he went out for his usual 1 ½-mile gallop at 5:15 a.m. A little later in the morning, trainer Robertino Diodoro, who will be saddling his first starter in the race, was all smiles as he fed the colt carrots and said everything was “great” with the horse.

Diodoro also reported that Ava’s Grace, who had to be scratched from the Kentucky Oaks, only has a minor injury and is expected to resume training next week. She had been sent to Hagyard Equine Medical Institute for a full evaluation Wednesday.

“Everyone in the barn is ready,” said trainer Kenny McPeek. The colt will start from the No. 16 post with Brian Hernandez Jr. riding.

World heavyweight boxing champion Tyson Fury is still expected to be part of King Fury’s entourage for the walkover from the barns to the paddock Saturday. McPeek extended the offer for the boxer to attend this week, which was accepted.

LIKE THE KING – M Racing Group’s Like the King jogged a mile at 7:15 with jockey Drayden Van Dyke aboard alongside a pony with Blake Heap aboard.

Heap, who is overseeing the preparation of Like the King here for Wesley Ward who has a mammoth stable housed at Keeneland, said plans for Derby morning are to be determined.

Heap put the saddle on Tea Olive to win Thursday’s fourth race and give Ward his 1,998th career victory. Ward has two more runners entered today on the eve of his first Kentucky Derby starter.

However, there is Kentucky Derby experience in the Ward camp with Van Dyke signed on for his third Derby ride. Van Dyke’s agent is three-time Kentucky Derby-winning rider Gary Stevens who is wearing several hats this week working for Fox Sports as well as managing some horses at Lone Star Park in Texas.

“It’s just what we do,” Foley said. “We love our horses and treat everyone like they’re a Derby contender.”

ROCK YOUR WORLD – The tall Candy Ride colt went trackside at 6:30 Friday morning to put in his last bit of exercise en route to Saturday’s 147th edition of the Run for the Roses.

Regular morning rider Javier Meza was aboard but he didn’t have a lot of work to do. Trainer John Sadler had deemed Friday’s activities to merely be a jog one time around the track alongside the barn’s stable pony.

He’s listed as the 5-1 second choice in tomorrow’s early Derby wagering and will have the nation’s second-leading rider – Joel Rosario – on board as they break from post 15 in the mile and one-quarter classic.

PREVALENCE HOPES TO REBOUND IN PAT DAY MILE – If the outcome of the Wood Memorial (GI) had been different, Godolphin’s Prevalence might have been making a Run for the Roses this Saturday.

Instead, trainer Brendan Walsh has the homebred son of Medaglia d’Oro, out of the Ghostzapper mare Enrichment, entered in the 97th running of the $500,000 Pat Day Mile presented by LG&E and KU (GII).

The Kentucky Derby obviously presents a stiff challenge for any 3-year-old, but the Pat Day isn’t going to be an easy task for Prevalence, who will be ridden by Tyler Gaffalione out of the No. 5 post as a 6-1 choice.

He’ll be taking on Kirk and Judy Robison’s two-time Grade I winner Jackie’s Warrior in the field of 12. Jackie’s Warrior had won his first four races for trainer Steve Asmussen before tangling twice with Derby favorite Essential Quality — finishing fourth in the Breeders’ Cup Juvenile (GI) and third in the Southwest Stakes (GIII). He drew the No. 3 post with jockey Joel Rosario and was made a slight 3-1 morning-line favorite.

Prevalence, who was unraced at 2, has won two of three starts in blowout fashion. Walsh said that the Wood proved that he wasn’t ready for a mile-and-an-eighth.

“I think it was too far for him,” Walsh said. “We had to find out, and we found out, and going back to a mile on Saturday should be right up his tree.”

But if he had won the Wood instead of finishing sixth, Prevalence might have been Derby-bound.

“He probably would, most certainly” have run in the Derby, Walsh said. “But like a lot of horses, it didn’t quite fit him, so we’ll go back to what he likes.”

The Pat Day Mile will go as Saturday’s eighth race with a 2:48 p.m. post time on the main track.

ZOFELLE ATTEMPTS TO TURN TABLE ON GOT STORMY IN LONGINES CHURCHILL DISTAFF TURF MILE – Heider Family Stables’ Zofelle (IRE), who came up a nose short of My Racehorse CA and Spendthrift Farm’s Got Stormy in their last meeting, will try to avenge that loss in the 36th running of the $500,000 Longines Churchill Distaff Turf Mile (GII) on Saturday.

Neither mare has raced since they faced off at Gulfstream Park on Feb. 27 in the Honey Fox (GIII). At the wire, Got Stormy was a nose in front of Zofelle, with Feel Glorious close behind.

“She’s been doing great this year,” said trainer Brendan Walsh of Zofelle, who will start from the No. 4 post position with jockey Irad Ortiz Jr. “She was unlucky last time, to get nosed out by Got Stormy. I don’t think there’s much between them.”

On the morning line for the field of seven fillies and mares, little separates Got Stormy, the 8-5 favorite trained by Mark Casse and ridden by Tyler Gaffalione, with Zofelle the 2-1 second choice.

“Hopefully we’ll get a good trip this time,” Walsh said, “and if we do, I think she’ll be right there again.”

Also coming out of the Honey Fox is Three Diamonds Farm’s Jakarta, who led most of the way before fading to fourth. This time, the Mike Maker trainee drew the No. 1 post and will have the services of jockey Luis Saez. She’s a 10-1 morning line choice.