Country Music Superstar Carrie Underwood to Release Powerful My Savior: LIVE From The Ryman Concert on DVD on July 23 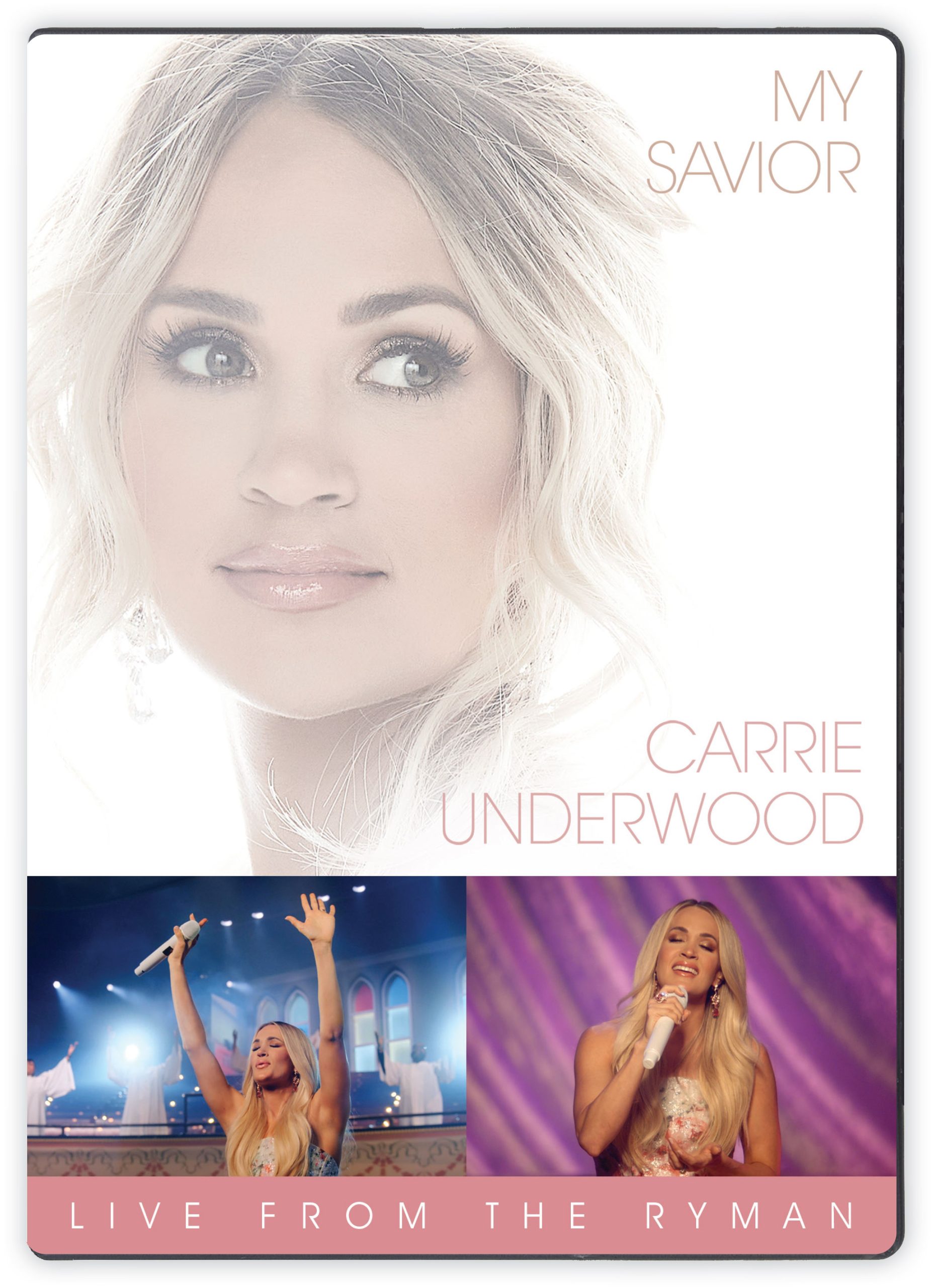 Seven-time GRAMMY® Award winner and three-time ACM Entertainer of the Year Carrie Underwood has recorded her first-ever gospel LIVE performance DVD, "My Savior: LIVE From The Ryman." The DVD will be released internationally on July 23 by Gaither Music Group in partnership with Capitol Records Nashville with distribution by Capitol Christian Music Group/Universal. Filmed at the celebrated Ryman Auditorium, known around the world as “The Mother Church of Country Music,” the country music superstar brings her best-selling, critically-acclaimed studio album "My Savior" (Capitol Records Nashville) to life on that legendary stage with breathtaking performances of traditional gospel hymns Underwood grew up singing such as “Amazing Grace” and “How Great Thou Art.” “This is an album I have always wanted to record and I’m thrilled to be able to bring these uplifting, inspirational songs to life in this special way,” says Underwood of "My Savior."
Other highlights of the Ryman concert include a duet with CeCe Winans, the best-selling and most-awarded female gospel artist of all time, on the classic hymn “Great Is Thy Faithfulness.” Singer/songwriter Bear Rinehart, frontman of the rock band, NEEDTOBREATHE, also makes a special appearance, joining Underwood to sing on another traditional hymn, “Nothing But The Blood Of Jesus.” Southern gospel and harmonica legend Buddy Greene and 10-time CMA Musician of the Year Mac McAnally, both of whom played on the album, also appear with Underwood. The DVD also features the time-honored classics “Because He Lives,” “Just As I Am,” “Victory In Jesus,” “The Old Rugged Cross” and “Softly And Tenderly.” "My Savior: LIVE From The Ryman," a virtual live concert performance from the iconic Ryman Auditorium in Nashville, TN, streamed live globally on Facebook on Easter Sunday, raising over $112,000 for Save the Children.
Additionally, on July 23, a TV special featuring performances from the "My Savior: LIVE From The Ryman" DVD will air on networks including PBS, DIRECTV, DISH TV, Circle TV, TBN, RFD-TV and more; and it will air in Canada on The Miracle Channel, Vision TV, Hope TV and CTS (Crossroads). The special will also air on GAITHERTV (Roku/Apple/Amazon) and on the Gaither TV YouTube Channel for a limited time beginning July 23.
Pre-orders of the My Savior: LIVE From The Ryman DVD bundled with the My Savior CD will begin on June 14 at Amazon, Walmart, Target, and other national retailers, in addition to www.gaither.com.
"My Savior: LIVE From The Ryman"
DVD SONG LISTING:
Jesus Loves Me (instrumental)
Because He Lives
Blessed Assurance
Nothing But The Blood Of Jesus
Just As I Am
O How I Love Jesus
Softly And Tenderly
Great Is Thy Faithfulness (feat. CeCe Winans)
I Surrender All
Victory In Jesus
How Great Thou Art
The Old Rugged Cross
Amazing Grace/Something In The Water
About Carrie Underwood
Carrie Underwood is a true multi-format, multi-media superstar, spanning achievements in music, television, film, and as a New York Times bestselling author and successful entrepreneur. She has sold more than 64 million records worldwide, recorded 27 #1 singles (14 of which she co-wrote), and has seven albums that are certified Platinum or Multi-Platinum by the RIAA, all while continuing to sell out arena tours across North America and the UK. All nine of her consecutive album releases (two of which she co-produced) from the beginning of her career debuted #1 on the Billboard Country Chart, making her the only artist to accomplish that feat. She has won over 100 major awards including 7 GRAMMY® Awards, 15 ACM Awards including three for Entertainer of the Year (the first female in history to win twice and the only female ever to win three times), 23 CMT Music Awards (holding the record for the most award wins ever for the show), 7 CMA Awards, and 15 American Music Awards. She has also built a successful business portfolio inspired by her passion for health and wellness, including her fitness and lifestyle brand, CALIA by Carrie Underwood, bestselling book, FIND YOUR PATH, her fit52 app, and a partnership with BODYARMOR Sports Drink. She recently announced her first-ever residency, REFLECTION: The Las Vegas Residency, at The Theatre at Resorts World Las Vegas, which will begin December 1.
About Gaither Music Group
One of the largest independent Christian music companies in the world and a household name for millions of fans, Gaither Music Group, in partnership with Primary Wave Music Publishing, is known worldwide for its award-winning and top-selling recordings, including the Gaither Gospel Series, of which 133 products have been certified gold, platinum or multi-platinum. These recordings, which encompass more than 177 video copyrights, showcase gospel music pioneers; many of the finest performers in the gospel and country genres; up-and-coming acts; and country artists including The Oak Ridge Boys, Jimmy Fortune, Joey+Rory, Alabama, Alan Jackson, The Statler Brothers, George Jones, Vince Gill, Josh Turner, Tennessee Ernie Ford, The Isaacs and others. The brand has partnered with Sandi Patty, Gloria Gaynor, Steven Curtis Chapman and a host of acclaimed talents from various fields of music.
Gaither Music Group has garnered sales of more than 40 million DVDs and CDs, including such PBS stalwarts as Billy Graham: God’s Ambassador, the only authorized video autobiography of Reverend Billy Graham; The Gospel Music of Johnny Cash; and three Elvis Presley projects, including He Touched Me and The Gospel Music of Elvis Presley, in conjunction with the Elvis Presley Estate. The company developed a partnership with Cracker Barrel Old Country Store® in 2008; and its alliances with Capitol Christian Music Group, Universal Music Group and Time Life Music remain bedrocks for the company.