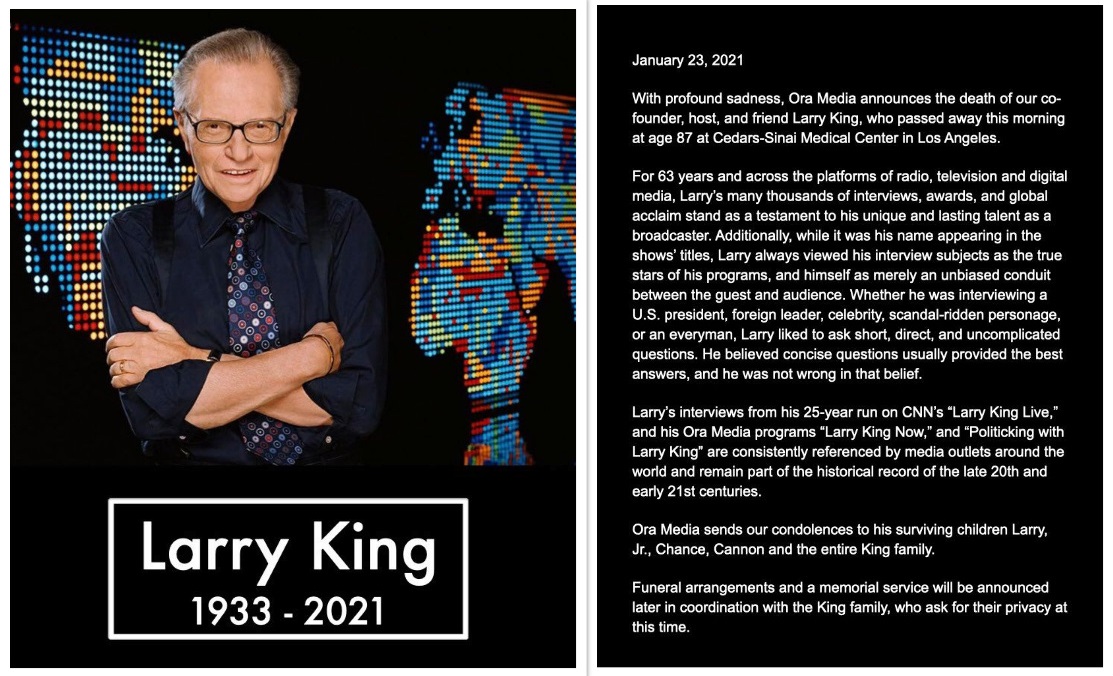 Larry King, the radio and television personality legend has died at the age of 87, his TV production company Ora Media said in a statement Saturday. The statement said he passed away at Cedars-Sinai Hospital.

Michele Elyzabeth said in a statement, "Today is a very sad day as I just learned of Larry King's passing. I had the priviledge to know Larry, who shared his wisdom with me over the years. He was a gentleman, a good person and an outstanding journalist who commanded great respect in the community. RIP Larry, we all will miss you."

"The first time I met Larry was at our Parapluie Inc. event for his Larry King Cardiac Foundation hosted by Simin Hashemizadeh in 2009. I remember he said to Michele, 'If you look up persistence and determination in the dictionary, you will find Michele Elyzabeth's photo there.' It was a great pleasure and honor to have met such a legend; and to come full circle in 2020 when we honored him with the Gentleman's Award at the 6th Hollywood Beauty Awards," said LATF's Vice President Pamela Price.

Laurence Harvey Zeiger adopted the perfect name, which turned out to be more than his name but what he has become as a king of multi-media journalism.

Winner of the prestigious Peabody and Emmy awards, Larry King was indeed a legend. Arguably the most respected and revered journalist of modern times having conducted over 50,000 interviews. King began his storied career in 1957 as a disc jockey in Miami. In 1978, he hosted the first ever live national call-in radio show, and became known for his relaxed and conversational style of interviewing. His diverse roster of guests became King’s calling card and attracted the attention of media mogul Ted Turner who hired him in 1985 where he spent 25 years as host of CNN’s “Larry King Live.”

In 1993, King also moderated the famed NAFTA debate between Vice President Al Gore and Ross Perot. Creating Ora TV, he hosts the Emmy-nominated “Larry King Now” and “PoliticKING with Larry King” which airs daily. King has been inducted into five of the nation's leading broadcasting halls of fame and is the recipient of the distinguished Allen H. Neuharth Award for Excellence in Journalism. In September 2011, he was awarded a Lifetime Achievement Emmy from the National Academy of Television Arts and Sciences.

Dear to his heart, King founded the Larry King Cardiac Foundation in 1988 which raised millions providing life-saving cardiac procedures for more than 1500 people as well as 100,000 heart screenings for needy children and adults.