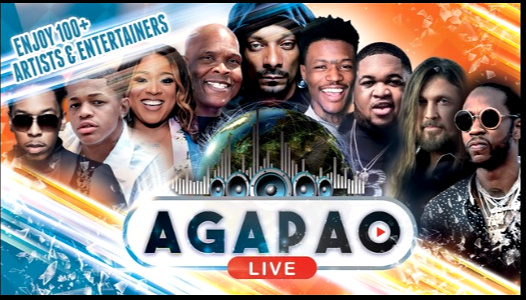 Over 100 artists from the hottest names in music, comedy and crossover entertainment have been set for AGAPAO LIVE, a world-wide streaming pay per view event, set for next Saturday, July 11, 2020 from 12 - 6pm PT/ 3-9pm ET.

This six-hour event will be live-streamed on the hottest new urban online network, Xperienc On Demand, to households around the world and include some of the biggest stars in entertainment coming together from their homes to inspire a locked-down world in a message of Unity through Music & Entertainment as the greatest artists in our time respond to Covid-19 and civil unrest around the globe.  The debut event will be streamed on https://www.xodlive.com/