How Has COVID-19 Impacted The Hotel Industry? 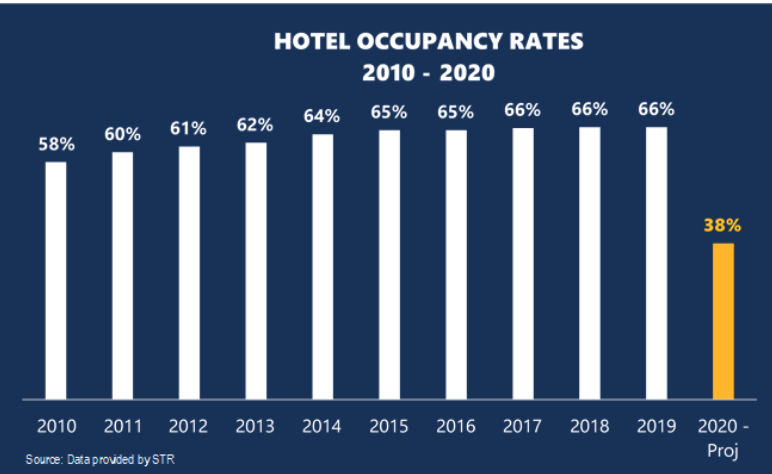 As COVID-19 continues to devastate the hotel industry, the American Hotel & Lodging Association (AHLA) released new data today showing that 70 percent of hotel employees have been laid off or furloughed as eight in 10 hotel rooms across the nation remain empty.

As this crisis progresses beyond what anyone could have projected, the impact to the travel industry is nine times worse than 9/11, with forecasted occupancy rates for 2020 hitting record lows worse than rates in 1933 during the Great Depression.

"With the impact to the travel industry nine times worse than September 11, the human toll of this public health crisis has been absolutely devastating for the hotel industry. For the hotel industry our priority is rehiring and retaining our hardworking employees who power our vibrant industry," said Chip Rogers, President and CEO of AHLA. "Hotels were one of the first industries affected by the pandemic and will be one of the last to recover. The CARES Act was an important first step with a lot of supportive measures for the hotel industry, but we need Congress to make important changes to the program to reflect the current economic reality and help the employees in the industries that have been impacted the most."

Due to the dramatic downturn in travel, properties that remain open are operating with minimal staffing. On average, full-service hotels are using 14 employees, down from 50 before the crisis. Resort hotels, which often operate seasonally based on the area's peak tourism months, averaged about 90 employees per location as recently as March 13, are down to an average of five employees per resort today.

The key findings of the report include:

As travel halted in late February, the hotel industry took immediate action to work with the White House and Congress to help hotel industry employees and small business operators, which represent 61 percent of hotel properties in the U.S.

"The hotel industry is at a critical juncture. We need more resources to survive this unprecedented time," said Rogers. "Additional funding is vital for small business owners across America, including tens of thousands of small business hoteliers, to help them keep their doors open and rehire and retain millions of employees."