Two tragedies struck across the US over the weekend with two mass shootings in less than 24 hours.

Over less than 13 hours and nearly 1,600 miles apart, two mass shootings this weekend left at least 29 dead and 53 injured, leaving the country reeling from yet more gruesome scenes of violence and death.

On Saturday morning, a gunman opened fire into a crowd at an El Paso, Texas, retail area killing at least 20 people. The suspected gunman is Patrick Crusius, according to reports. The retail location is popular among both local residents and shoppers from just across the southern border with Mexico.

Federal prosecutors were treating it as a domestic terrorism case.

The following day, a shooter attacked a crowd outside a popular bar in Dayton, Ohio. In Dayton, responding officers killed the gunman, police said. Nine people are reported dead after the gunman, identified as Connor Betts, 24, fired dozens of shots just after 1 a.m. ET on Sunday.

CBS EVENING NEWS anchor and managing editor Norah O’Donnell sub-anchored CBS THIS MORNING from El Paso, Texas and talked with the mayor Dee Margo about how his community is responding to Saturday’s mass shooting.

Margo also revealed that President Trump called him to offer his condolences and asked if there was anything the community needed. 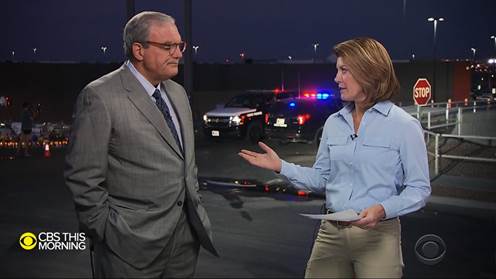