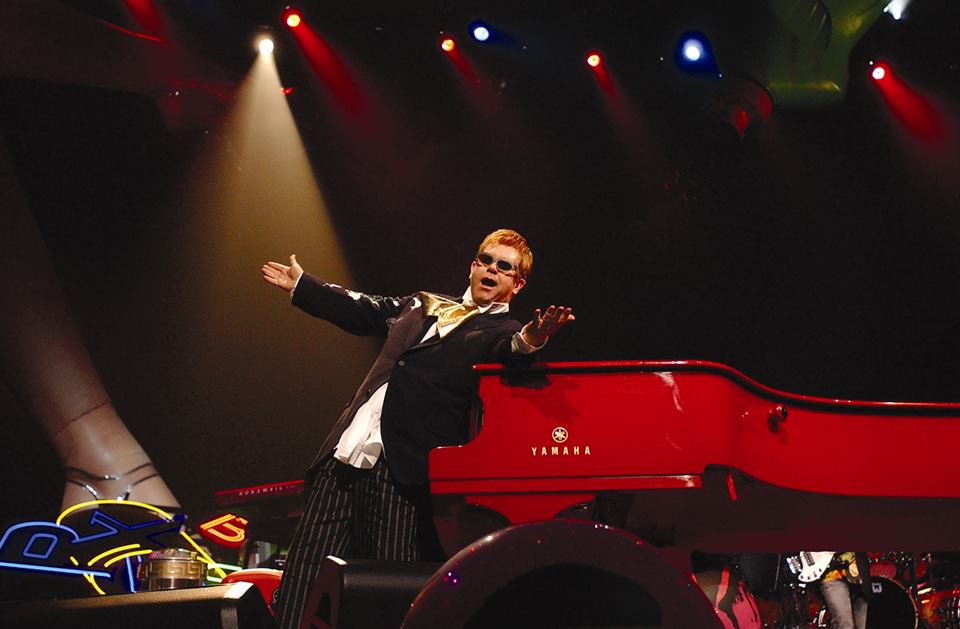 Returning to The Colosseum at Caesars Palace to perform his most iconic hits, tickets for performances of Elton John’s critically-acclaimed show,

Tickets may be purchased in person at The Colosseum at Caesars Palace Box Office, by calling

World-renowned singer, songwriter and performer Elton John made a triumphant return to The Colosseum at Caesars Palace with his all new show, “The Million Dollar Piano.” At the centerpiece of the performance is the show’s namesake piano, an engineering marvel featuring more than 68 LED video screens created by Yamaha.

Elton John’s band features Nigel Olsson on drums, part of Elton's original three-piece band, as well as musical director Davey Johnstone (who first recorded with Elton in 1971 and joined the band a year later) on guitar, Matt Bissonette on bass, John Mahon on percussion, and Kim Bullard on keyboards, with a special appearance by percussionist Ray Cooper.

“The Million Dollar Piano” features iconic hits and classic album tracks from throughout Elton’s incredible five-decade career, all enhanced by the most elaborate stage design Elton has ever used.

Elton is one of the top-selling solo artists of all time, with 38 gold and 31 platinum or multi-platinum albums as well as 58 Billboard Top 40 singles, and he has sold more than 250 million records worldwide. Elton holds the record for the biggest-selling single of all time, “Candle in the Wind 1997,” which sold 37 million copies, as well as for most appearances on Billboard's Adult Contemporary chart with his most recent single “A Good Heart” (from his latest album “Wonderful Crazy Night”) marking his 72nd entry. He has also written the music for stage and screen successes Billy Elliot: The Musical, Elton John and Tim Rice's Aida, and The Lion King, which was named the highest-grossing stage show or film release in the world. Elton has over 4,000 performances, in more than 80 countries, to his credit since launching his first tour in 1970.

Among the many awards and honors bestowed upon him are five Grammys, a Grammy Legend award, a Tony and an Oscar, a Best British Male Artist BRIT Award, induction into the Rock and Roll Hall of Fame and the Songwriters Hall of Fame, the Kennedy Center Honor, Legend of Live Award, 12 Ivor Novello Awards and a knighthood from HM Queen Elizabeth II for "services to music and charitable services."

L. A. Glam
What Will Happen to Zsa Zsa Gabor's Bel Air Mansion?

Music
Who's Performing At The Presidential Inauguration Ceremony?