Gamers: How Will You Celebrate 20 Years Of Tomb Raider?! 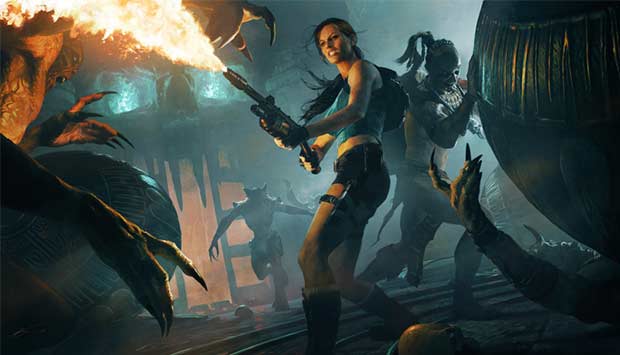 Crystal Dynamics®, Square Enix® and Tomb Raider® fans around the world continue to celebrate 20 years of Lara Croft, the gaming world’s iconic heroine. Are you joining the fun and games?

At this year’s E3, Square Enix is hosting a special episode on Square Enix Presents, the live broadcast from the show floor, featuring a fun look at fan-favorite tombs from the past two decades of Lara’s adventures. The Square Enix E3 booth will also feature a customizable impact engraving machine. Show attendees can secure a limited edition, custom-engraved medallion with the 20-year celebration logo.

As the next highpoint for Lara’s 20-year celebration as an icon, Square Enix is providing fans with the opportunity to answer the question, “What does Tomb Raider mean to you? ” Fans are able to submit a video explaining how the series has influenced their lives, recalling their favorite franchise moments, a story of how Lara Croft has inspired them, or other memories from the past two decades. Videos can be submitted here.

In addition to the video testimonials, Square Enix’s Fan-Art community can be immortalized in Tomb Raider history by submitting their original works to the #TombRaider20 community art contest. The Fan-Art can cover any of the iconic elements of Tomb Raider:  breathtaking landscapes, long-forgotten tombs, dangerous enemies, and of course, Lara Croft. Classic and modern interpretations of the character are encouraged! Entries can be submitted here and the contest is open until June 17, 2016. The winners will each receive $1,000 and will have their works featured in a special print art offering to be revealed later this year.

The 20 Year Celebration has already seen a number of exciting announcements. During this year’s PAX East, April 22-24, in Boston, Square Enix and Crystal Dynamics hosted a panel – “Lara Croft: The Undisputed Queen of Gaming” – along with a cosplay celebration featuring a variety of fans dressed as the iconic Lara Croft. Square Enix also revealed that there will be a one-of-a-kind epic biography focusing on Lara Croft available later this year. Written by lifelong Tomb Raider fan and Crystal Dynamics Senior Community Manager Meagan Marie, 20 Years of Tomb Raider will explore the groundbreaking, rich and diverse history of the iconic gaming franchise. This special edition hardcover book includes unpublished images, information on the rich lore, iconic characters, epic fan community, developer history, and, of course, insights into the games that started it all. Included are: exclusive interviews from Core Design, Crystal Dynamics, Eidos Montreal, official voice actors, composers, live action models, comic artists, and an in-depth look at all games in the franchise with insights into unreleased titles as well.

Music
Electric Daisy Carnival Is Sold Out, But Parties Galore If You Missed Tickets

FYI
#Nashies Get Your 'Nashville' Memorabilia