Actresses Cynthia Nixon, Kristen Bell, Tracee Ellis Ross and Michelle Monaghan, all of whom have played a key part in changing the TV landscape, have taken part in a filmed debate for The EDIT to discuss contentious yet crucial topics such as sexism, diversity (of all shapes, ages and colors) and opportunity for women.

The four women talk passionately about issues affecting them, their peers and the industry. On the subject of pressure on female actors to look good, Tracee Ellis Ross – daughter of Diana Ross and the first black woman to be nominated for an Emmy Award for Outstanding Lead Actress in a Comedy Series in 30 years – comments, "There is so much shaming going on… It's often hard to navigate through and remove the shame from the conversation and ask yourself, 'Am I comfortable with what I look like?'" 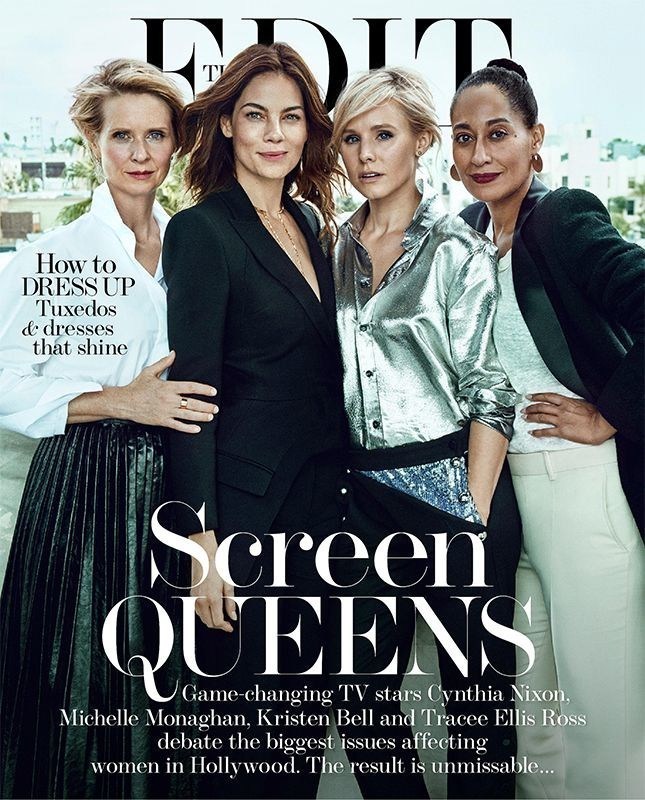 Prolific film and TV actress Kristen Bell reveals, "We are culpable in this charade. For the Emmys, I wore this beautiful dress and couldn't wear a bra, and I took Leukoflex tape and I taped my nipple to my shoulder. I'm not perfect, my boobs aren't up here."

Cynthia Nixon believes that progress has been made on screen since she starred as Miranda in revolutionary TV show Sex and the City, thanks to programs such as Girls: "Girls has been important in changing the game for female actresses. In Sex and the City we had to be thin and look great all the time; in Girls they have permission to be more real and less airbrushed."

Still, say the actresses, they are unfairly treated compared to their male co-stars. Michelle Monaghan [True Detective, The Path] says, "You may be one of the first people to read a script because someone is very interested in you, it could even be the lead role, but there is this tendency to lean into the idea that we have to get the guy first. You don't necessarily secure financing for a film until they get the guy."

For The EDIT's shoot, Nixon, Monaghan, Bell and Ellis Ross were photographed by Victor Demarchelier and styled by Alison Edmond.